I’m not advocating anything dangerous here, just old-fashioned common sense—and practices. We are too clean and so are our homes. And that germaphobia has created a market—or the market has created germaphobia—for all sorts of wasteful products.

I’m not advocating you never bathe. However, this MIT chemical engineer hasn’t showered since 2003 and instead mists daily with a probiotic spray. Apparently he smells and looks clean. How? Scientists hypothesize that nitrosomonas eutropha, an ammonia-oxidizing bacteria in the spray, at one time colonized our skin “before we started washing it away with soap and shampoo” and that it acted “as a built-in cleanser, deodorant, anti-inflammatory and immune booster by feeding on the ammonia in our sweat and converting it into nitrite and nitric oxide.” In our war on bad bacteria, the good become collateral damage.

I’m also not advocating that we all stop cleaning our homes and wallow in filth, but rather, to reconsider how we clean our homes.

Cut the products below and you’ll save money, reduce your waste and come into contact with more microbes that can boost your immunity.

In 2016, the FDA announced it would ban 19 chemicals found in consumer antibacterial soaps—not in soaps used in hospitals and food service. Animal studies have shown that triclosan, one of these banned ingredients “alters the way some hormones work in the body and raises potential concerns for the effects of use in humans.” In addition, “laboratory studies have raised the possibility that triclosan contributes to making bacteria resistant to antibiotics.”

Phew! The FDA took action. But when I searched for antibacterial soap just now, a bunch of products came up, products with different antibacterial agents.

According to Harvard’s Graduate School of Arts and Science blog,

[T]here has been no conclusive evidence to suggest household antibacterial soaps are an improvement over non-antibacterial soaps. In fact, one study found it didn’t matter whether a household used plain or antibacterial soap containing triclocarban, a compound that is closely related to triclosan and is a part of the FDA ban: both cut the incidence of childhood pneumonia and diarrhea in half.”

And many of these antibacterial soaps come in the form of…

People like bottled liquid soap for a couple of reasons: 1) it doesn’t gunk up the sink with sticky soap chunks like bar soap does and 2) they often assume that if several people use the same bar of soap, it will become infested with germs that may kill them.

But according to this recent article in the New York Times, a communal bar of soap doesn’t transmit infections. The article refers to a few studies, including a rigorous 1965 one which found that “The level of bacteria that may occur on bar soap, even under extreme usage conditions (heavy usage, poorly designed non-drainable soap dishes, etc.) does not constitute a health hazard.”

If you use liquid soap currently and want to reduce your plastic footprint, you’ll find switching to bar soap pretty painless. (The organic terrycloth soap saver pictured below came from Aquarian Bath.)

Disinfecting spray, toilet pucks with bleach, surface cleaners with bleach, disinfecting wipes—both the products themselves and their packaging generate a ton of waste. Yes, you need to clean your home but you do not need to render it, as Stanford researchers Justin and Erica Sonnenburg put it, “as sterile as an operating room.” In their fascinating book, The Good Gut, these pioneers into gut research recommend using less toxic ingredients to clean our homes, ingredients such as vinegar, castile soap and lemon juice. I clean with vinegar I make from fruit scraps, kombucha I ferment to the point of vinegar and baking soda. Sometimes pulverized egg shells too. (Read my review of The Good Gut here.)

But what if your child’s pacifier falls on a dirty floor? Shouldn’t you at least sterilize that? Funny you should ask.

A study of parents who licked pacifiers clean that had fallen on the ground versus parents who washed the pacifiers showed that the children who had the licked ones popped back into their mouths developed fewer allergies and less eczema.

Yes, mostly, shoppers use these because carrying a pound of loose pearl onions up to the cashier in our hands proves difficult. We need a bag. However some people use plastic produce bags for one apple. I’m sure you’ve seen this. My younger daughter works as a cashier at a grocery store and she tells me that people put all sorts of stuff into plastic produce bags, like single blocks of cheese—already wrapped in plastic. People tend to do this out of a fear of germs. Several hands have handled their cheese already. Not that that’s so terrible. But in the mind of the person bagging a block of cheese it is.

I’ve also heard health concerns about reusable cloth produce bags. People worry they harbor deadly bacteria. Unless they have berry juice on them or lots of dirt, I wash my produce bags after I’ve used them several times and have lived to tell the tale. (I make these cloth bags.) 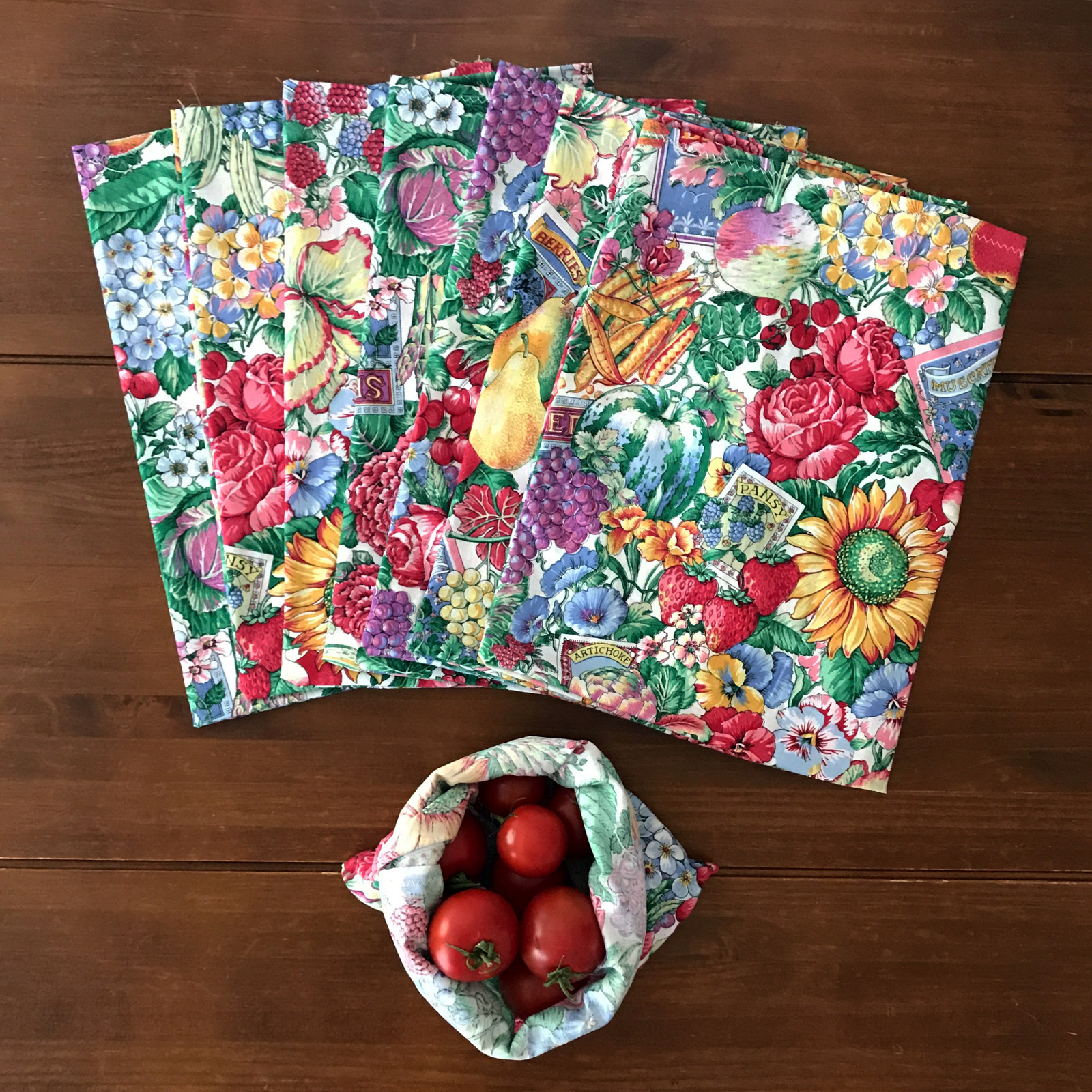 You have no direct control over silly laws but I wanted to include them in this list.

Many readers have told me that the grocery stores in their area will not allow them to use their own clean containers to fill up with bulk foods, prepared foods, cheese and so on, and that employees waiting on them cite health and safety laws when denying completely reasonable requests to put a sandwich in a tin. Governments and businesses must ease restrictions such as these.

What requires more restrictions? Single-use plastic. Corporations won’t cut back on producing the stuff until forced to. Plastic pollution’s assault on the planet also requires consumers to take action and refuse buying the stuff. Part of that action includes a more relaxed attitude toward germs.

15 Replies to “Drop that Bleach! The Wasteful Side Effects of the War on Bacteria”