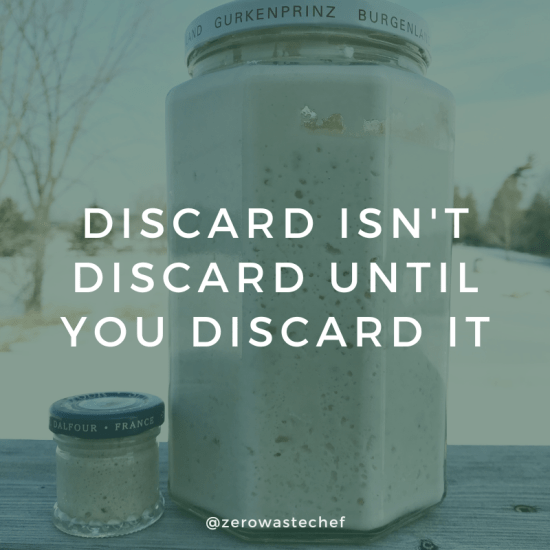 I get a bit nervous when my jar of sourdough discard runneth under. I love having pungent, easier-to-digest, fermented flour in the refrigerator, ready to use in a discard recipe such as banana bread, pizza or pita bread. But I don’t want to accumulate several jars of discard. I have only so much space in the refrigerator—and my tummy.

I regularly teach free sourdough starter workshops and the questions below regarding discard come up the most frequently. If you have a question about discard that I haven’t addressed here, please ask away in the comments.

What is sourdough discard?

When you feed your sourdough starter, you remove most of it from its jar before stirring in its meal of fresh flour and water. The starter you remove doesn’t have enough life it in—bacteria and yeast—to leaven a loaf of bread. But just as waste isn’t waste until you waste it, discard isn’t discard until you discard it, which you don’t need to do.

Why would I want to store my sourdough discard instead of throwing it out?

Baking with discard reduces food waste and thus, greenhouse gas emissions. Wasted food comprises 21 percent of the US waste stream and if it were a country, it would be the third largest polluter in the world, behind China and the US. But besides the environmental benefits of eating discard, it adds flavor to all kinds of food. The most sustainable food often tastes the most delicious.

Sourdough discard works well in many baked goods that don’t require lively yeast—flat foods like crackers, tortillas and pancakes. Or you can use it to flavor recipes that rely on leavening from other sources, such as active dry yeast, baking soda and baking powder.

Where should I store my jar of sourdough discard?

Store your discard in a jar in the refrigerator where it will continue to ferment, albeit very slowly, whereas at room temperature, it will ferment quickly and you will soon have very ripe discard on your hands that won’t be useful for much of anything. You can also store your discard in the freezer.

How long does discard keep? How old is too old?

I constantly recycle my jar of discard in the refrigerator. I’ll add a quarter cup of discard to it a couple of nights in a row and then might remove a cup to make pizza dough the next day. After I add discard to the jar, I stir it into the existing contents (usually…sometimes I’m in a hurry to get the feeding done asap and don’t bother stirring). So, my sourdough discard is never actually very old.

I will continue to recycle discard in its jar until either the lid becomes too crusty to open and close or I completely empty the jar. In other words, my jar of discard stays in the refrigerator for many months before I start collecting it in a clean jar.

Now, if you don’t regularly add and remove discard from your jar—if it just sits there in the refrigerator without any additional food for many weeks—it will become extremely sour and difficult to work with. Cracker dough won’t roll out, for example—it falls apart.

Stored in the freezer, sourdough discard will theoretically keep indefinitely. I’ve left it in the freezer for as long as six months, untouched (i.e., I don’t add or remove discard). Before using it, let it thaw in the refrigerator or at room temperature, never in the microwave. The microwave will cook/kill it.

My discard tastes too sour. Can I fix it?

If you don’t like the sour flavor, you have a couple of options to reduce it. The addition of baking soda in sourdough crackers, for example, neutralizes the sour flavor. I once accidentally omitted baking soda in my dough and it tasted pretty awful. Fortunately, I had tasted it before rolling it out and merely mixed in the baking soda to remedy the problem (always taste as you go!). The crackers tasted delicious as usual.

You can reduce the sour flavor by feeding your discard some fresh flour and water. At that point, it’s more of an active starter than discard. Your recipe will not only taste less sour but also rise a bit more than usual with the extra yeast in it.

What should I do with my sourdough discard if mold develops?

If a bit of white mold appears on the surface of your sourdough discard, remove it. If it appears more entrenched, you may want to compost it. If pink or orange mold develops, definitely compost your discard. I have never had mold form on my discard. I think it is quite rare. The acids in the discard help prevent mold from forming.

If I neglect my discard, do I have to toss it?

If it looks okay but you have left it for so long that it will impart too sour a flavor in whatever you cook with it, or will not render good dough or batter, rather than throwing it out, feed it some flour and water to perk it up—how much depends on the amount of discard in there. Or remove a small amount of discard, feed that, wait and bake with it after a few hours. Sourdough leaves lots of room for experimentation.

What is this grey liquid on top of my discard? Should I throw the discard out?

Often a layer of grey liquid will form on top of the discard—or even your starter. I usually pour this hooch off but you can also simply stir it in. If it smells strong like acetone, I’d pour that off to reduce the bacteria strain creating that aroma. It won’t hurt you—your discard is merely hungry—but it smells awful.

A SCOBY has formed on top of my discard. Does it think it’s kombucha?

If you leave your discard in the refrigerator for a month or longer, without adding new discard to it, a rubbery, dark layer may form on top. When I was stranded in Canada at the beginning of Covid for nearly four months, my discard back in California developed a 5mm-thick SCOBY on top. I had never seen this before. Underneath, the starter looked fine. I composted the SCOBY, removed a spoonful of discard and fed it in a clean jar. After a couple of feedings, the revived starter bubbled happily in its jar.

I always have way too much sourdough discard. How can I manage it better?

When I first started baking with sourdough, I kept a much larger starter—I fed 100 grams each of flour and water to 35 grams of starter. Do that every day and you can easily accumulate many jars of discard. I keep my starter small today—I feed 40 grams each of flour and water to a scant tablespoon of starter. This keeps my discard jar low—but not empty. I get nervous when the jar runs out.

I accidentally used all of my starter in a recipe. Can I revive sourdough discard?

Absolutely! A jar of sourdough discard serves as an insurance policy against starter death. If you have some discard on hand, remove a spoonful of it and feed it fresh flour and water in a clean jar. You should have a bubbly starter ready to bake with after a couple of feedings, depending on the discard’s condition.

Have questions about the sourdough starter itself?

I have a list of FAQs for that too. Go here to read it.

My cookbook is a finalist for a cookbook award from the International Association of Culinary Professionals and has been shortlisted for a Taste Canada award. You can check out the book here.

4 Replies to “How to Manage Your Jar of Sourdough Discard”