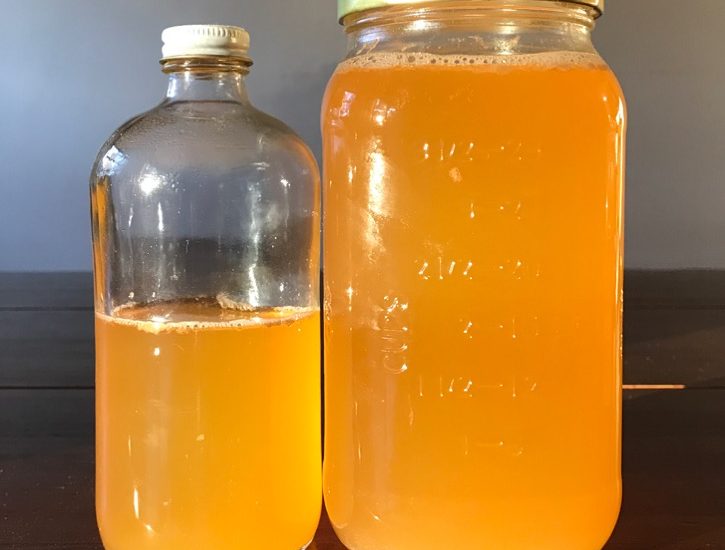 Like these 7 foods to make not buy, most of these nine foods require very few ingredients. You’ll save money and, while I can’t attest to the flavor of homemade baking powder—because why would I ever eat that on its own—these foods taste better than store-bought.

I do buy baking powder but when I run out, I make my own. Mix 2 parts cream of tartar to 1 part baking soda (I can buy both in bulk). Sift and use immediately.

Thoroughly mix together a couple of teaspoons of molasses and a cup of white sugar to “make” brown sugar. After I posted this tip on Instagram a while ago, several people from Europe told me that brown sugar is rare there so they also “make” theirs. (If you feel like making this in advance, just sub in granulated sugar and a bit of molasses into your recipe that calls for brown sugar.)

I also made the superfine sugar in the jar below on the left. It’s very much like powdered sugar and passes the homemade whipped cream test. I ground granulated sugar up in a coffee mill to make that. It contains little black flecks of a dehydrated vanilla bean that I added to the grinder.

We had to figure out how to make crackers as soon as we cut the plastic. We love crackers but every box of crackers in every store in America contains a plastic pouch inside.

We tried a few different recipes but once my daughter MK started making sourdough crackers, we stopped making all other types of crackers. These taste cheesy but contain no cheese, just starter (flour and water), fat, whole wheat flour, salt and baking soda. Find the recipe here.

Just before I swore off of plastic, I had sworn off of breakfast cereal and had started to make lots of muesli and granola. I love them both but muesli takes less time and requires only one pot on the stove—no mixing bowl or baking sheets to wash. Once you’ve made a large batch of it, you can grab a quick breakfast (or snack).

I make mine based on on what I find in the pantry—but always with rolled oats. If you have only a tablespoon of this (chia seeds for example) or an eighth of a cup of that (say, dehydrated pulp from nut milk making), toss those in too and use them up. Just writing this, I now crave muesli. I think I’ll make some after I publish this post… Find the recipe for muesli here.

Like most things zero-waste, you do need to plan ahead if you want nut milk for your muesli or for cooking. This kind of planning used to be normal but only throughout most of human existence.

My daughter made almond milk today after soaking the nuts overnight. She then dehydrated the pulp afterward. I usually do this in the oven. She did it in a pan on the stove. The nice thing about doing it in the pan is that, like the muesli on top of the oven instead of granola inside it, you can keep an eye on the pulp and remove the heat before it browns too much.

Homemade nut milk tastes so much better than store-bought and yes, I realize that almonds consume lots of water but they consume less water than cow’s milk requires to produce and we don’t guzzle our almond milk (or cow’s milk). Everything in moderation.

Go here for the almond milk recipe. Swap the almonds out for pecans or cashews or other nuts of choice. I also have a recipe for coconut milk here. And another for pumpkin seed milk here.

Be warned! Once you eat a pumpkin pie made with homemade pumpkin purée you’ll want to always use fresh pumpkin. In addition to baking pies, I use the purée in quick bread, homemade pasta and soup. I cook whole small pie pumpkins in my pressure cooker in a life-changing eight minutes. Find the pressure cooker instructions here.

If you don’t have a pressure cooker, roast a whole pumpkin in your oven for about 45 minutes or so. I think my pressure cooker scares my kids (I used to hide in the other room when I cooked in it) because when I came home today after working all day, I found a roasted pumpkin cooling on my counter. Find the instructions for roasting a whole pumpkin here.

I can buy bulk tahini at Rainbow Grocery in San Francisco but I don’t make it up there as often as I’d like to. When I do shop there, I buy some. When I inevitably run out, I can make it easily. Toast the sesame seeds and run them through a food processor with a bit of sesame oil.

I wish I had kept track of how much money my homemade vinegar has saved me over the years. Recently I noticed that a large bottle of apple cider vinegar at the store costs $8. The good stuff is worth it so if you don’t have time to make vinegar or don’t want to make it or fermentation scares you, then buy it.

But you can make vinegar very easily and out of food that otherwise often goes to waste—apple cores and peels. If you don’t eat enough apples to make a batch, then freeze your scraps until you have amassed a large pile of them. The microbes on the fruit that ferment the scrap vinegar won’t die, they’ll just take a little nap. Find the scrap vinegar recipe here.

Check out my book here!