Act as if what you do makes a difference. It does.” — William James

To live without hope is to cease to live.” — Fyodor Dostoyevsky

You have to show them that there’s a better way. You need to inspire them like you inspired me! You need to give them hope.” — Barry, Sausage Party

Do Not Lose Hope

Last week, after the UN Intergovernmental Panel on Climate Change (IPCC) released its alarming report stating that, in order to limit the catastrophic effects of runaway climate change, we must limit global warming to 1.5°C by making “rapid, far-reaching and unprecedented changes in all aspects of society,” and that we have only 12 years to do so, people started to panic—or resign themselves.

From some friends, family and followers on social media, I heard sentiments along the lines of “No one will make the necessary changes so I won’t either. We’re doomed.” Yes, governments and industry worldwide must implement policies to curb climate change and here in the US, our federal politicians appear determined to speed up our demise. But there are reasons for hope.

Author and professor Bill McKibbon launched this worldwide, grassroots environmental movement with the goal of reducing the level of carbon dioxide in the atmosphere to a safe 350 parts per million. We blew past 400 ppm in 2016. Among other activities, 350.org organizes massive climate marches and pushes for divestment from fossil fuels.

In addition to hindering the cash flow and thus operations of fossil fuel companies, divestment also stigmatizes these corporations and delegitimizes their destructive practices of pillaging the planet for short-term profits at the expense of every future generation.

The movement to divest has fossil fuel companies worried. Shell stated in its annual report this summer that:

Additionally, some groups are pressuring certain investors to divest their investments in fossil fuel companies. If this were to continue, it could have a material adverse effect on the price of our securities and our ability to access equity capital markets.

You can find your local 350.org chapter here.

Compacted in a landfill, discarded food lacks exposure to air. Anaerobic bacteria—bacteria that thrive without oxygen—break that food down. The bacteria produce methane gas as a byproduct, a greenhouse gas much more potent than carbon dioxide. Food waste accounts for about 8 percent of emissions worldwide.

Given that the average American wastes almost a pound of food every day, just about everyone can waste less food. The following will help reduce most of it at the household level:

According to a study the journal Nature published on October 10, 2018, Americans need to reduce their beef and milk consumption by 90 percent and 60 percent respectively and increase their consumption of beans and legumes from four to six times current levels in order to curb climate change.

We eat mostly plants (the Michael Pollan diet) and incredibly delicious food. We love beans and legumes—and Indian food. I regularly cook chana masala (chickpeas in tomato-onion sauce), dal and my daughter MK has become obsessed with cooking dosas, a crispy flatbread made with a fermented batter of rice and urad dal (split black lentils). I haven’t posted her recipe yet on my blog but this one looks good from Food 52. 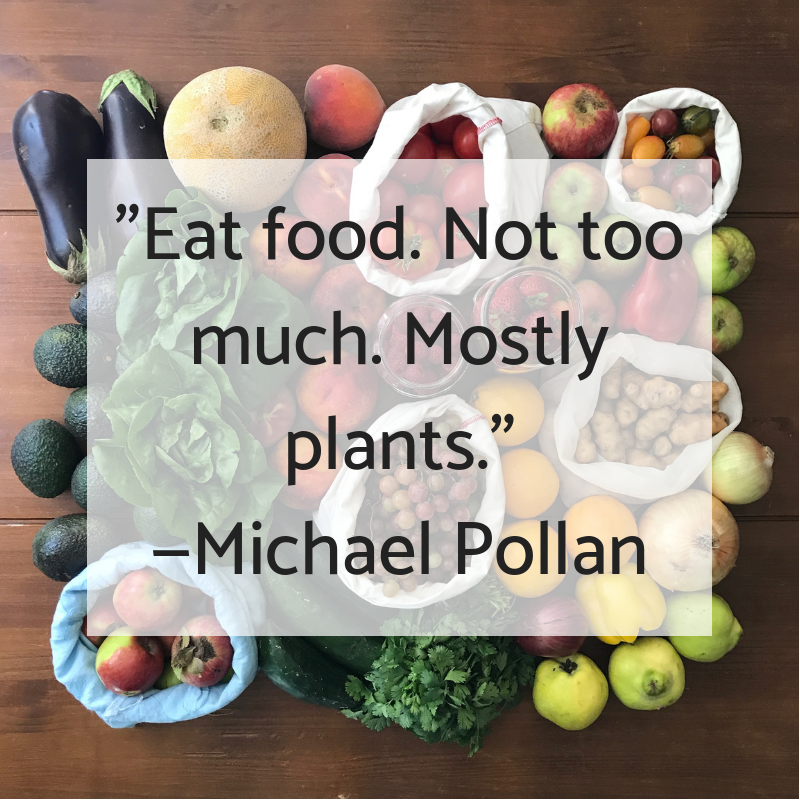 I can think of about 111 million reasons why we should all do this.

Two Fridays ago, I joined all around wonderful human Rob Greenfield for #FollowForGoodFriday. We each committed to picking up one piece of trash for every new follower on our respective Instagram accounts. I gained 861 new followers. I’ve picked up 202 pieces of trash so far—mostly plastic, which comes as no surprise.

Plastic wreaking havoc on the oceans—and wildlife, the air, our drinking water—is made from oil and since 2010, fossil fuel companies have poured $180 billion into facilities to produce more of it. Recycling won’t fix this. We have to refuse plastic at its source, especially single-use plastic, which you find wrapped around virtually every processed food-like substance in the US. But if you try to eliminate your waste overnight, you set yourself up for failure. Start small. Start here. Then build from there.

Many people who start on the zero-waste and plastic-free path often feel tempted to buy all sorts of gear and toss out the plastic they have. Yes, you’ll need some new things (like a bamboo toothbrush, for example). But we can’t shop our way out of climate change. The best way to reduce your consumption is to, well, consume less.

Make do. Look for second-hand first. Repair what you have. When you do buy, opt for reusable, durable, quality products. Most of us have way too much stuff and it doesn’t make us happy. All that stuff has to be manufactured and shipped—often from overseas—consuming precious resources, often for stuff we con’t need, stuff that needs dusting and maintenance… Consumption is exhausting (in many ways).

Just running errands or riding to the café to work on my laptop, I ride at least 20 miles a week, which isn’t that much, but 20 miles of exercise are better than zero. Zero miles’ worth of emissions are better than 20.

I avoid flying. I’ll never see many parts of the world and that is fine with me. (My kombucha SCOBY is now better travelled than I.) If you need a vacation, where can you visit close to home rather than flying? I’m fortunate to have many choices—Yosemite, Monterey and Carmel, Lake Tahoe, state parks. Think of the money you’ll save on airfare if you vacation close to home.

Tackling climate change requires us to examine all of our actions every moment, every day. Having been raised Catholic and now a disciple of the Church of Zero Waste, this comes naturally to me. Basically, be aware and conscious of your choices.

Civilisation requires energy, but energy use must not destroy civilisation.” — Pope Francis

Last week, hoping to offer a glimmer of hope, I wrote several posts on social media about the wonderful book Drawdown: The Most Comprehensive Plan Ever Proposed to Reverse Global Warming. (I also handed it to my younger daughter.)

Edited by environmentalist, entrepreneur and writer Paul Hawken, Drawdown outlines 100 solutions to global warming that have the “greatest potential to reduce emissions or sequester carbon from the atmosphere.” Each solution is ranked based on the amount of greenhouse gas it can reduce or remove between 2020 and 2050. The book—a result of a coalition of 75 Drawdown Fellows, scientists and researchers working worldwide—provides a checklist that can take us beyond slowing or stopping emissions, to rather, reversing them.

This book will give you hope. And when those uncomfortable climate change conversations spring up around the dinner table next month at Thanksgiving, you’ll be informed. (Read more about the book here.) 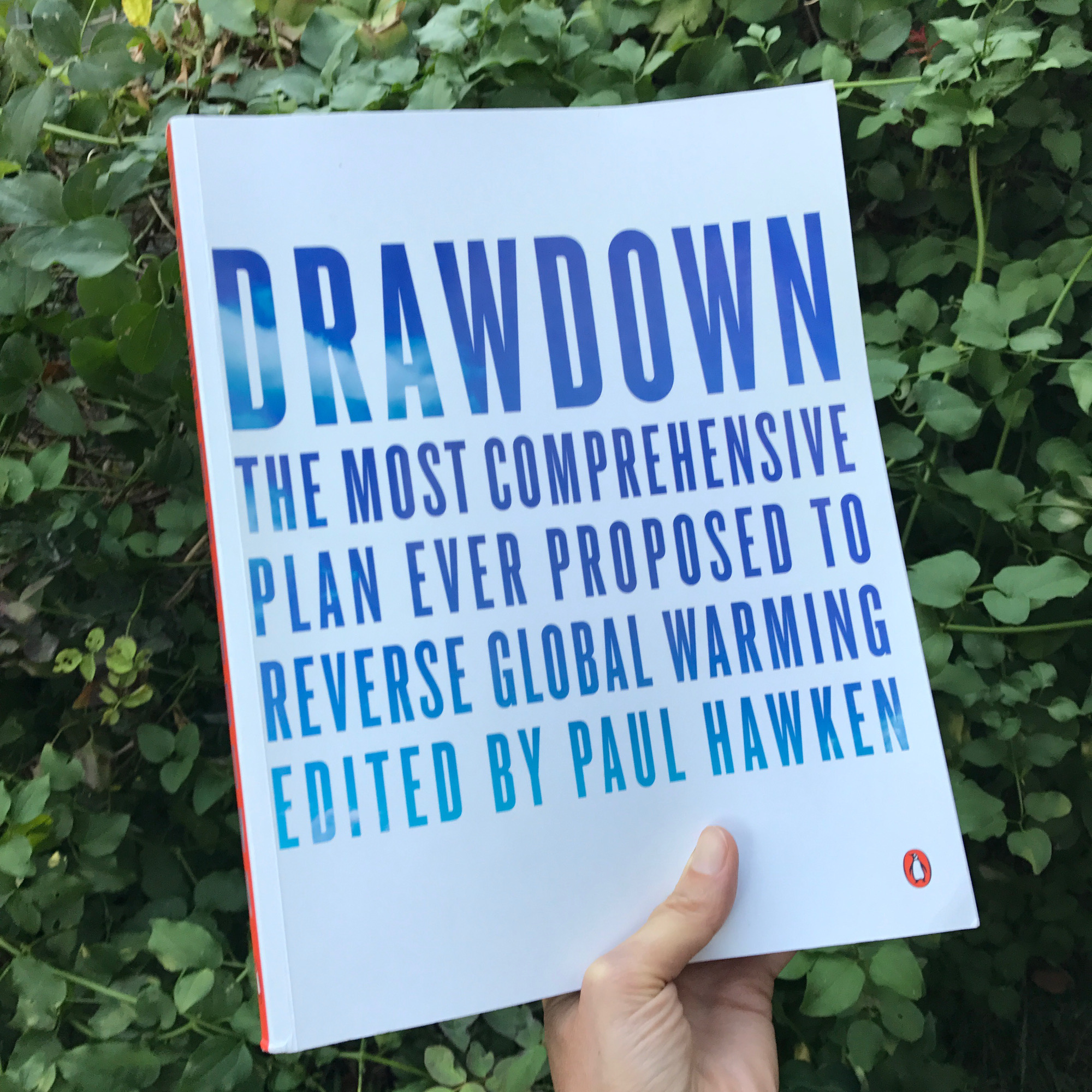 Many of our leaders work as PR agents for fossil fuel companies, rather than working for the people. Vote them out. Their children’s and grandchildren’s futures depend on it.