The bad news on the environment is as unrelenting as a California wildfire. We’re well over 400 parts per million of carbon dioxide in the atmosphere (scientists consider 350 ppm safe). A 2012 report from the World Bank describes the world as “barreling down a path to heat up by 4 degrees at the end of the century.” Celsius. And just today a chunk of the Antarctic Peninsula broke away, creating one of the largest icebergs ever recorded.

It’s enough to drive you to stuff your face with bluefin tuna at every opportunity, wash it down with bottled water sucked out of a drought-stricken watershed, jet around the planet to visit fragile ecosystems before they vanish (think of the selfies!) and buy some Exxon stock.

Then, like a breath of air restored through carbon-sequestration, comes the book Drawdown: The Most Comprehensive Plan Ever Proposed to Reverse Global Warming. 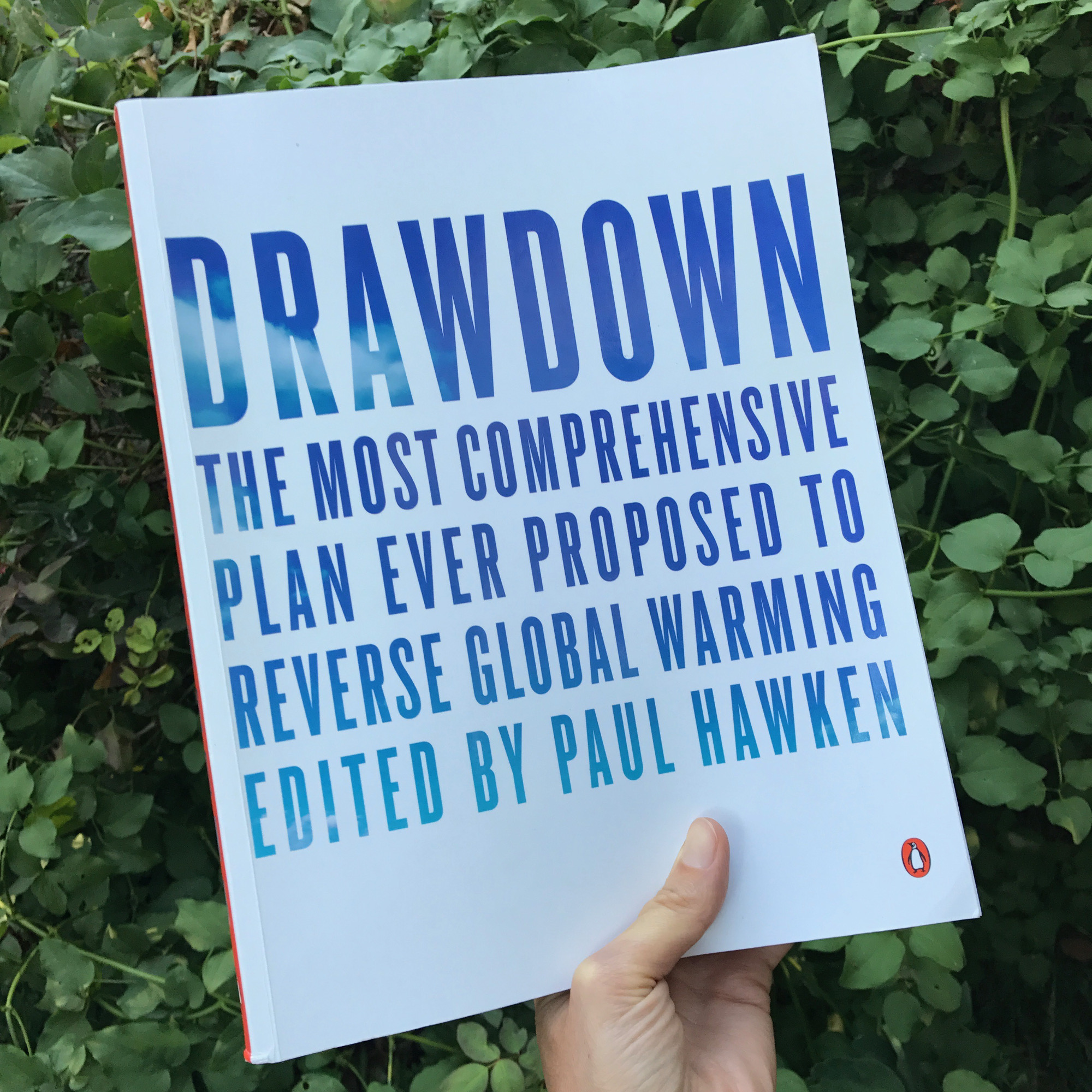 Edited by Paul Hawken, environmentalist, entrepreneur and writer, Drawdown outlines 100 solutions to global warming that have the “greatest potential to reduce emissions or sequester carbon from the atmosphere.” Each solution is ranked based on the amount of greenhouse gas it can reduce or remove between 2020 and 2050. The book—a result of a coalition of 75 Drawdown Fellows, scientists and researchers working worldwide—provides a checklist that can take us beyond slowing or stopping emissions, to rather, reversing them.

As we address global warming through this roadmap, we will also create a better world, as nearly all “of the solutions compiled and analyzed [in the book] lead to regenerative economic outcomes that create security, produce jobs, improve health, save money, facilitate mobility, eliminate hunger, prevent pollution, restore soil, clean rivers, and more.”

Want to hear more good news? These solutions—hands-on practices and technologies—already exist. We know they work. Now we need to ratchet them up.

But what, oh food blogger, does all of this have to do with my dinner, you may ask? More than you might think. Of the top 10 solutions, three fall into the food category. (The other categories in the book cover energy; women and girls; buildings and cities; land use; and materials.)

While 800 million people on the planet go hungry, worldwide we waste a third of the food we produce. And when that food decomposes in landfill, it releases methane gas, a greenhouse gas that warms the planet at a rate 86 times greater than carbon dioxide. According to the book, food waste contributes “roughly 8 percent of total anthropogenic [man-made] greenhouse gas emissions. Ranked with countries, food would be the third-largest emitter of greenhouse gases globally, just behind the United States and China.”

In lower-income countries food waste results from a lack of infrastructure—“bad roads, lack of refrigeration or storage facilities, poor equipment or packaging, a challenging combination of heat and humidity.” These problems can be remedied by improved infrastructure and better communication between farmers and buyers.

In wealthier countries, food waste occurs further down the supply chain. It results from a consumer—and supermarket—demand for “perfect” blemish- and bruise-free produce of a uniform shape and size, from confusing “best-by” dates on packaged food and from a decline in basic skills. As the book states “In too many places, kitchen efficiency has become a lost art.” This waste squanders not only the food itself but also the soil, the water, the fertilizers, the labor and the energy that went into growing all of that food. Cutting food waste requires consumer education on expiration dates, awareness through Ugly Fruit and Veg campaigns and Feeding the 5000, redistributing food to those in need, implementing food waste reduction targets—and above all—preventing food waste “rather than finding better uses for it after the fact.”

I think by now we all know that eating a pound of lentils impacts the environment much less than does eating a pound of beef. “The most conservative estimates suggest that raising livestock accounts for nearly 15 percent of global greenhouse gases emitted each year; the most comprehensive assessments of direct and indirect emissions say more than 50 percent.” The book goes on to state that if “cattle were their own nation, they would be the world’s third-largest emitter of greenhouse gases.”

By now most of us also know that a diet rich in animal protein negatively impacts human health. While adults require 50 grams of protein a day, in “the US and Canada, the average adult consumes more than 90 grams of protein per day.” Eating too much animal protein “can lead to cancers, strokes, and heart disease,” diseases that both cause immeasurable suffering and cost a fortune to diagnose, manage and treat.

What effect on the planet will reducing the consumption of animal products have? The book points to a 2016 University of Oxford study that examined the effects adopting a plant-based diet worldwide. It found that “emissions could be reduced by as much as 70 percent through adopting a vegan diet and 63 percent for a vegetarian diet.”

Someone on Instagram recently asked me how to add flavor to plant-based dishes. She said she found hers bland. This need not be the case. I suggested experimenting with spices (depending on the dish)—cumin, turmeric, crushed chilies, cayenne powder, mustard seed, cardamom, coriander, cinnamon, cloves, fresh garlic and ginger—and garnishing dishes (again depending on the dish) with fermented foods, such as kimchi, preserved lemons, hot peppers, salsa, chutney or homemade yogurt. If you need recipe ideas, my recipe index consists mostly of vegetarian recipes, many of which are also vegan.

In this type of agroforestry, trees and pasture or forage coexist in “a single system for raising livestock, from cattle and sheep to deer and ducks. Rather than seeing trees as a weed to be removed, silvopasture integrates them into a sustainable and symbiotic system.” In the dehesa in Spain, a region famous for its jamón ibérico, farmers have practiced this sustainable method for 4,500 years. (Dan Barber writes extensively about the dehesa in his wonderful book The Third Plate).

As discussed in the previous solution, raising livestock generates a huge amount of greenhouse gas. Silvopastoral systems help mitigate that and offer other benefits:

If you’ve been feeling despondent on the state of the environment, please read this book. And then, let’s get to work. Drawdown provides information and tools for all of us.

10 Replies to “Drawdown: A Book that Just Might Save the Planet”