This sourdough discard banana bread post came to be after a surplus of apricots forced me to play jar Jenga in my freezer, trying to make space for my bounty. I found mashed overly ripe bananas that I had squirreled away months earlier upon the realization that they would have become compost had I not dealt with them. But I didn’t have time to bake at that moment. Into the freezer they went. (Go here for freezing food in jars.)

Mashed bananas, like so many foods, freeze very well, which prevents food from going to landfill where it emits methane gas, a greenhouse gas much more potent than carbon dioxide. Simply peel the bananas and mash them with a fork until, well, mashed. (I like to use a flat surface to mash them on, such as a plate.) In addition to preserving the food, the freezer also buys you time—you can bake from a few days to several months later. To thaw, move the frozen bananas to the refrigerator the night before you need them.

Like baking with still-edible bananas on their way out, baking with sourdough discard also prevents food from going to waste. Every time you feed your starter, you remove most of it from the jar—this is the discard. Instead of actually discarding the discard in the trash, you can bake all kinds of recipes with it:

And now, sourdough discard banana quick bread can take its rightful place on this list! Keep food out of landfill by baking—and eating—yummy quick bread!

You can do one more thing to help prevent food from going to waste—sign this petition asking CVS to stop dumping edible food and other items. 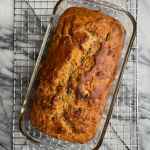 This banana bread is only slightly sweet. If you ordinarily reduce the amount of sugar in quick bread recipes, you may not want to reduce the sugar in this recipe by very much.

My cookbook has been shortlisted for a Taste Canada award!