I usually make sourdough pancakes a couple of times a week following this recipe, which calls for butter and eggs (I use pastured only for both). Several people on Instagram have asked me for a vegan sourdough pancake recipe and I’ve been working on that this week.

I experimented with many substitutions to my sourdough pancake recipe, beginning with:

The olive oil tasted too strong so I switched to coconut oil but in both versions, the flax meal egg replacer resulted in fairly gummy pancakes.

So I wondered about simply omitting an egg replacer. The unfed sourdough starter, left over from feeding my sourdough starter, Eleanor, is quite sour and acidic. This acid reacts with the baking soda—which I add at the very end—to make the batter puff up and rise.

So I tried more iterations but without an egg replacer:

When I made these without the egg replacer, the starter reacted with the baking soda as usual but the pancakes didn’t rise enough to prevent them from being gummy. They needed more volume.

So I added a bit of extra flour to one batch. That resulted in the worst batch—uncooked and pretty terrible (I still ate them…I’ve eaten so many pancakes this week…). Had I mixed flour into the starter and left it overnight to ferment, that would have turned out much better. But I want to be able to make these quickly, without having to wait for the batter to ferment. The whole point of breakfast for dinner is to eat it at dinnertime, not the next morning at breakfast time.

I was getting closer

Then I thought, okay, I’ll try almond flour (finely ground blanched almonds), hoping it would add some volume rather than the pastiness of unfermented flour. It worked! I tried the almond flour version with baking powder and without. I found it worked best without baking powder.

So I went through all of those iterations to discover that the following simple changes worked best to veganize the recipe:

I am obsessed with cast iron

I cook these pancakes (and anything I can) in well-seasoned cast-iron pans. When I’m finished, I wipe away any little bits of food. To remove larger bits of food, I’ll scrub the pan with a sponge and water. Pancakes never make much of a mess though. For more information on maintaining or reviving cast iron, go here. Whichever pan you use, add oil to it to prevent the pancakes from sticking.

Start with a sourdough starter

To make this and other sourdough recipes, such as sourdough bread, you’ll need an Eleanor of your own. She is a 100 percent hydration starter, meaning she contains equal parts flour and water by weight.

To feed your sourdough starter, you’ll take most of it out of the jar and add in fresh flour and water. The carbohydrates in the flour provide food for the hungry bacteria and yeast in the small amount of starter remaining in the jar. You can read more about starting and nurturing a sourdough starter here. For troubleshooting, go here.

I like to have a jar (or two) of unfed starter on hand. Not only does the tangy flavor make amazing crackers, if anything happens to Eleanor—say, someone accidentally adds all of her to a recipe—I can feed the discard a few times and essentially clone her. 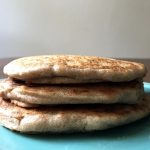 Today, on Day 11 of the zero food waste challenge,