Homemade refried beans taste delicious, fill you up, cost little money to make and contain only a handful of ingredients. The taste of canned refried beans pales in comparison and I prefer that my food not come into contact with plastic.

The epoxy that lines cans contains either BPA or a just-as-bad-if-not-worse replacement, such as BPS. According to the Environmental Working Group, BPA “is a synthetic estrogen that scientists have linked to breast cancer, reproductive damage, developmental problems, heart disease and other illnesses.”

You may have read an article in The Guardian last week entitled “Ditch the almond milk: why everything you know about sustainable eating is probably wrong.” It recommended that we all buy canned beans because industrially produced food consumes less energy than home-cooked food. The same can be said of Soylent (as in Soylent Green), a meal replacement available in either powdered or sludge form and which eliminates the need to waste time chewing the food and nutrients necessary to sustain life.

I agree with a lot of what this article said—and I love The Guardian—but the pressure cooker I cook my beans in is pretty darn efficient. After soaking beans for about six hours, they cook to perfection in a couple of minutes. I reserve the liquid and use it later to thin the refried beans or to thicken up soup and add flavor.

And in an ideal world, rather than relying on centralized food production in factories, small communities of neighbors or roommates or commune members would take turns cooking large batches of food and everyone would share. Let’s call this community-produced cooking. This does happen. My daughter C wants to eat in our community kitchen tomorrow night, where people take turns preparing vegetarian dinners four nights a week. Usually about 20 people show up. But community-produced versus industrially produced food is a topic for another blog post…

Some notes on the ingredients

My daughter MK first made these for us and I’ve basically lifted her recipe from her blog, The Plastic-Free Chef, and made a few tweaks.

I added a poblano pepper for the beans featured in this post because I had one and wanted to use it up and also because poblano peppers taste delicious. MK turned me on to them. Similar in shape and size to bell peppers, they have a not-too-spicy kick. In winter, when fresh peppers have gone out of season, I’ll add fermented hot peppers to this or even just the liquid from the hot pepper jar. I almost always have fermented hot peppers on hand.

To bring out the flavor of my poblano, I charred it by placing it on the rack of a gas burner over a high flame and rotating it as it became more charred. It blackened and blistered after about five minutes. To remove the skin, place the still-hot pepper in a dish with a lid. The steam from the pepper will loosen the skin and you’ll be able to scrape it off easily. When not in use for something else, I use my small Le Creuset Dutch oven for this purpose—it retains heat so well. Seed and chop the pepper and set aside for the beans. You can prepare peppers this way days in advance and store them in the refrigerator until you need them.

I like to both buy as few ingredients as possible and buy small amounts of spices to ensure a high turnover and peak freshness. Because I always have the necessary spices on hand, I throw together my own chili powder. I use dried chillies, cumin, oregano, coriander, cloves and allspice. Other tasty additions include ancho chili powder, cayenne pepper and garlic powder if you have it. I put fresh garlic in my refried beans—and pretty much all savory dishes—so I don’t have garlic powder on hand generally. This spice mix also makes a good topping for stove-top popcorn, a zero-waste food group.

Last week, we ate these refried beans with rice, all stuffed into fresh pita bread that my younger daughter C had made that morning for breakfast—on a weekday! Not exactly traditional but so tasty! (MK has a recipe for pita bread on her blog also.)

1. Combine spices in a jar. Adjust amounts to taste. 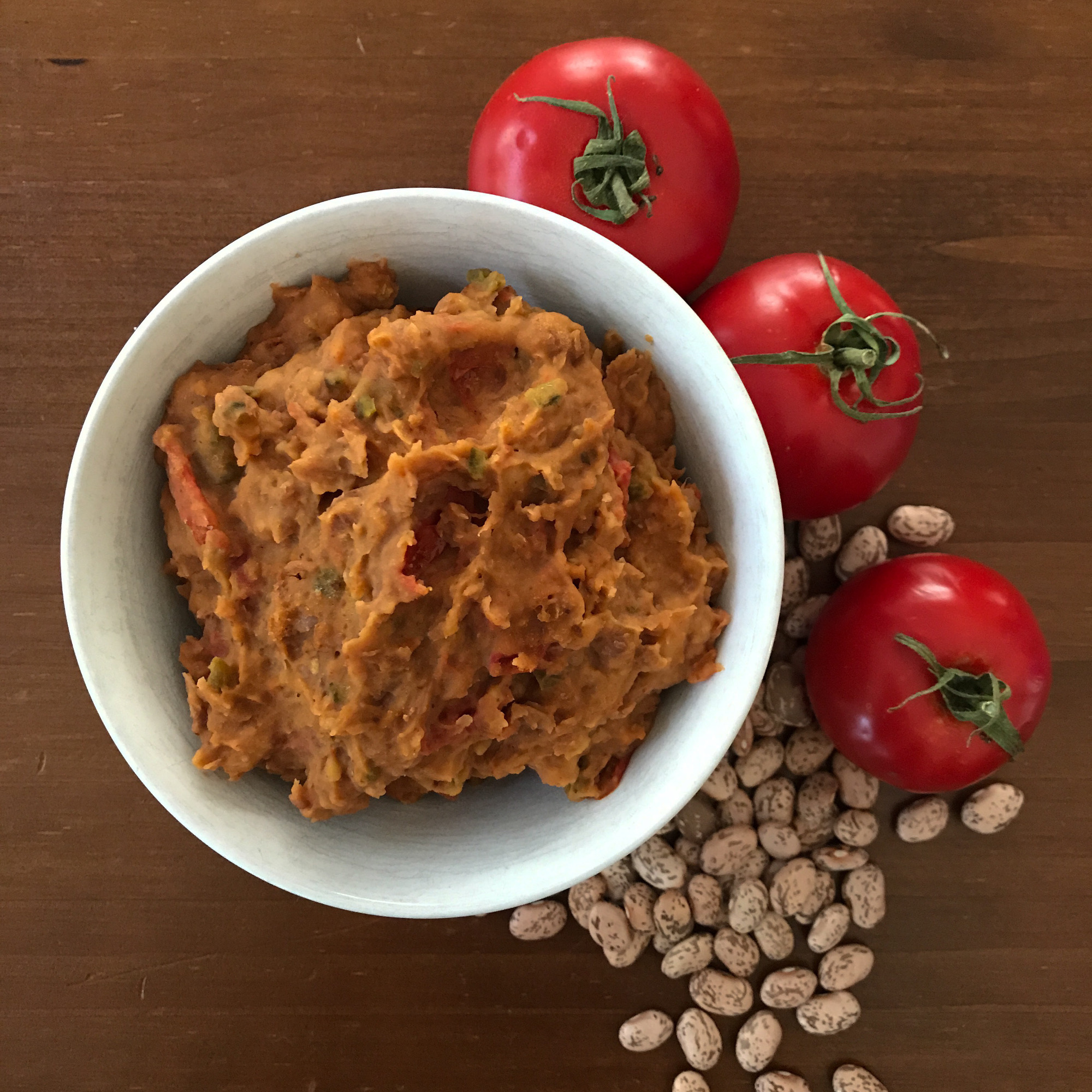 1. Place the beans in a large bowl or pot and add enough water to cover by about two inches. Cover with a lid, plate or towel and soak for at least six hours or overnight.

2. Drain and rinse the beans. Cook in a pressure cooker according to your model’s instructions, in a slow cooker—with enough water to cover—for about eight hours, or in a pot on the stove—again, covered with water—for one to two hours, until the skins begin to fall off.

3. If desired, char the poblano pepper. Do this either while the beans soak or while they cook. Place the pepper on the rack of a gas burner over a high flame and rotate it regularly. It will blacken and blister after about five minutes. While still hot, place in a dish with a tightly fitting lid. This will create steam, which loosens the skin. After the pepper has cooled, scrape off the skin with the edge of a sharp knife. The skin will fall right off. Remove seeds and mince. Set aside. You can prepare the peppers a few days in advance and store in the refrigerator until you need them.

4. Drain cooked beans. Reserve cooking liquid to thin these out if necessary and to use in another recipe such as soup. Return cooked beans to the pot. Add the remaining ingredients and mash beans and tomatoes with the back of a wooden spoon over medium heat. Add some of the reserved bean liquid for a thinner consistency if desired.

5. Continue to heat, stir and mash until the beans begin to bubble and have heated through.

6. Enjoy with rice, tortillas, salsa, avocado or guacamole or all of the above.