Forgetting to bring your money before you head out shopping can provide a great opportunity to re-examine your shopping list—and in the case of grocery shopping, prevent food waste.

The Sunday before last, I arrived at the farmers’ market late. Once there, before even opening my purse, I realized I had neither money nor my bank card with me. If I rode home to get some money, by the time I rode back, the market would have been closed. At the realization that I would buy nothing, I felt a small hunger pang, turned my bike around and pedaled home, empty-handed.

Back in my kitchen, I did a quick inventory—and found lots of food. 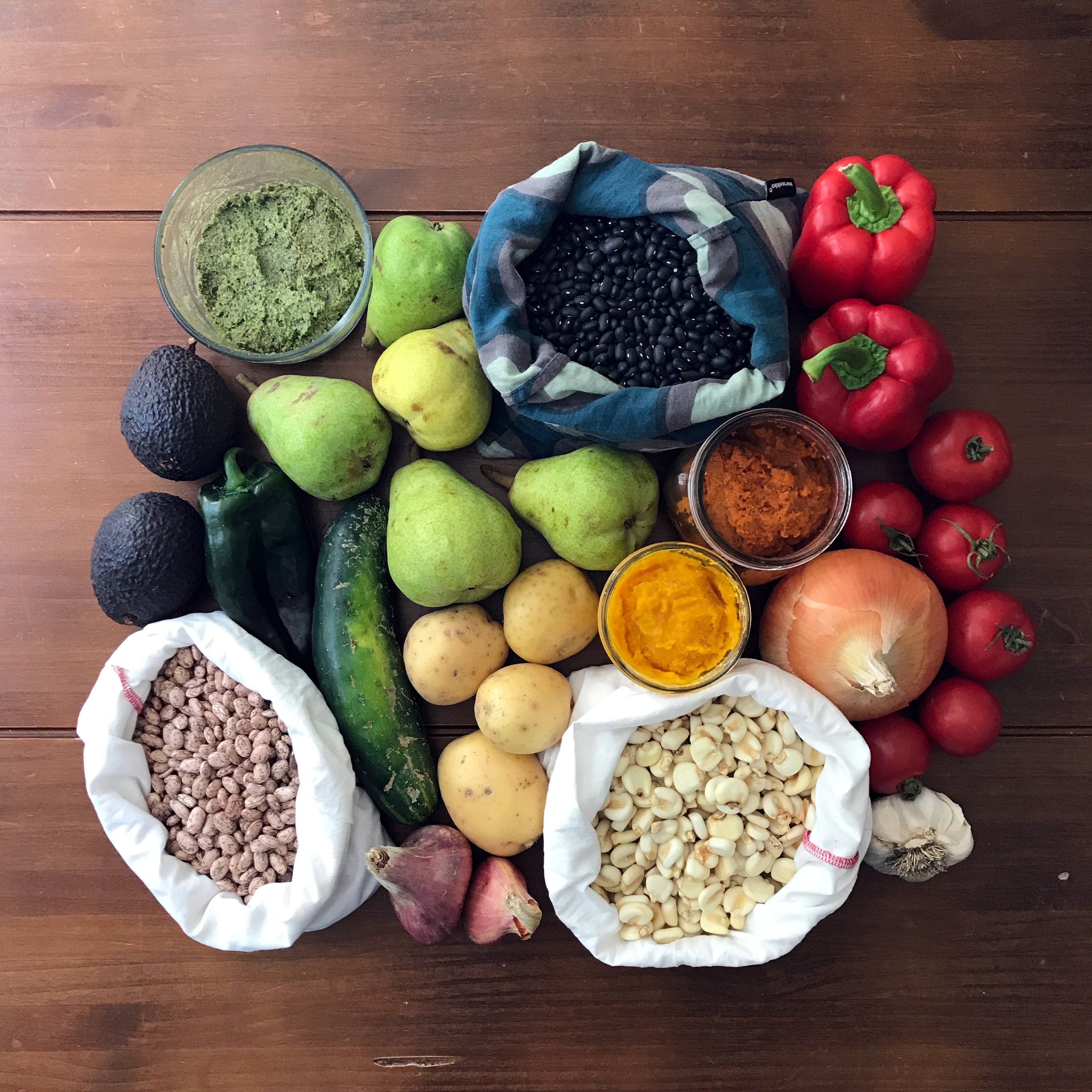 After I took the picture, I decided to pull out a few other things from the freezer. I was bound to find something good and I’ll also need space in there for all the roasted tomatoes I’ll prep within the new few weeks.

After conducting my inventory, I spent some time figuring out a new menu plan for the next several days—the old plan went out the window.

Some of the Things We Ate

I roasted the potatoes in olive oil and tossed them in some of the leftover pesto. If you have a cast iron pan, do yourself a favor and roast your vegetables in it. Washing glass pyrex dishes I’ve roasted vegetables in is not my favorite thing. Roasting in cast iron makes cleanup incredibly quick and easy. (Click here for how to maintain and revive cast iron pans.)

I almost always have pinto beans on hand. I soaked some for about six hours, cooked them in my pressure cooker and used the rest of the tomatoes to make delicious, filling, satisfying refried beans. We ate them with rice. (Click here for the refried beans recipe.)

The Iroquois and other Native American groups grew the “three sisters” crops together—corn, beans and winter squash. The tall corn supports the beans, the beans add nitrogen to the soil and the large leaves of the squash plants cool and protect the soil for all three crops. These crops also happen to taste delicious together. I used the frozen squash (after thawing it out), hominy corn, black beans and homemade vegetable broth to make my soup. After polishing the refried beans off later in the week, I had a small amount of rice on my hands and threw that into the remaining soup.

What can you do with one avocado, a bit of cocoa powder and the small amount of coconut cream your daughter sneaked into the kitchen? (This is how my daughter rebels…sneaking in a can of food…I don’t think I need to worry about her too much…) You make dairy-free chocolate-avocado ice cream. I tasted frequently as I went along, so the following ingredients are approximate only. I’ll post a more accurate recipe soon.

This froze very hard, so I took it out of the freezer for a few minutes to allow it to soften for easier scooping. The next time I make this, I’ll add more vanilla extract (vodka + vanilla beans) or vodka or both. Because alcohol doesn’t freeze, fewer ice crystals will form with this addition. But don’t add too much alcohol or your ice cream won’t freeze.

This tasted fantastic—like fudgesicles. I feel justified in calling it ice cream. It contains coconut cream. I froze it.

Two weeks ago, I texted my pastry chef daughter some pics of cookbooks I had borrowed from the library. One was for ice cream, sorbet, granita and so on. MK texted back that she planned on buying an ice cream maker when she graduates from school this winter.

Chandra and I hopped back on our bikes, rode back toward his house and less than an hour after receiving MK’s text, found an ice cream maker by the side of the road—a bright yellow, working, like new (if not new) Cuisinart ice cream maker. I couldn’t believe my eyes (I still can’t…). We snatched it up. I texted MK a picture of it and told her to ask the Universe for other stuff she needs or wants. 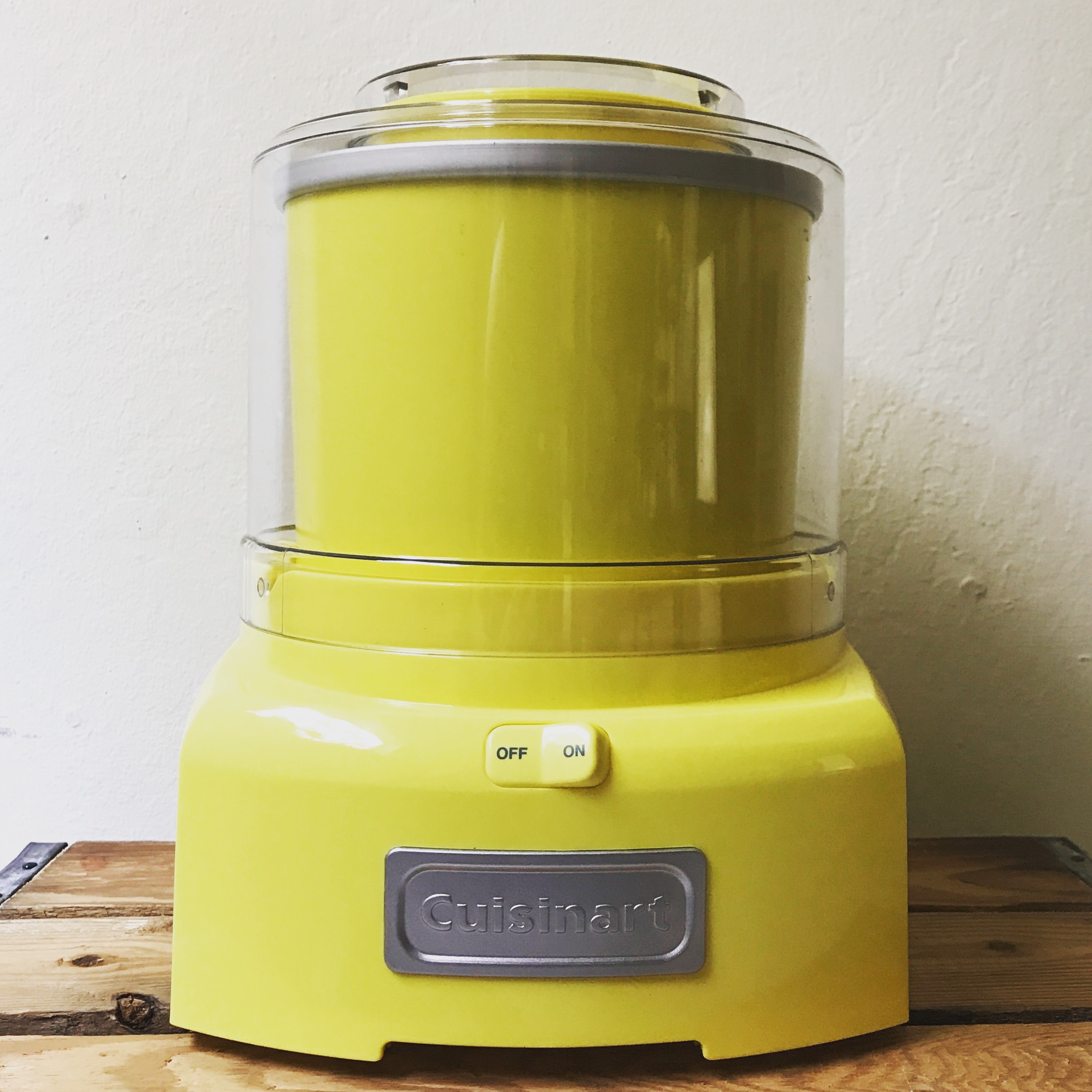 I cannot tell a lie. What I cooked was not macaroni and cheese despite what the recipe I followed adamantly claimed. It tasted good—we polished it off—but it was not macaroni and cheese. It was a tasty vegan side dish of pasta with a creamy and savory squash sauce. The sauce consisted of onion, garlic, cashews, squash and some spices. If I make it again, I’ll post the recipe.

I made some fermented limeade with the lime juice and ginger bits strained from my ginger bug. It tastes amazing! After straining my ginger bug and adding the liquid to a drink like ginger beer, I have a bunch of ginger bits left over. These are covered in good bacteria and yeast. I will usually make a second drink with this ginger, such as fermented hibiscus soda. But sometimes I don’t want to do it at that very moment. Sometimes I want to sleep!

I wondered how a fermented drink would turn out if I froze the ginger bits to use later. As I discovered, it turns out very well! (Click here for the basic fermented lemonade recipe, which I adapted by adding mostly ginger bits and very little ginger bug.)

We eat these often and had them for breakfast on the weekend. I ran out of maple syrup—it all went into the ice cream—so we ate these with jam. Yum! (Click here for the sourdough pancake recipe.)

Charlotte hollowed out the peppers she brought home, cracked pastured eggs into them and baked them for breakfast one morning. They tasted delicious.

As the week progressed, the food dwindled. On Wednesday, I decided take some pictures of our community orchard—Instagram needs constant feeding! While I snapped several photos of one very prolific apple tree, a few apples fell to the ground. I picked these up along with some others that had fallen and took them to the community kitchen, where my neighbor told me to take them home. She had already picked a bunch of apples earlier in the day for the kitchen.

During apple season, I buy apples at the farmers’ market every week but of course couldn’t last week without any money. Apples nonetheless still rained down on me. I used them to make an apple crumble. (Click here for the apple crumble recipe.)

Lots of fruit on urban fruit trees goes to waste. If you don’t have access to fruit trees but would like to snag some free fruit, check fallingfruit.org for fruit trees all over the world that you can pick for free. And if you notice your neighbors who have fruit trees don’t harvest the fruit, they may be very happy to let you help yourself. My neighbor scores kumquats this way on our street.

The broccoli seeds took about a week to sprout, so we haven’t eaten them yet. The black beans sprouted a bit faster but I haven’t done anything with them yet either. I’ll add the sprouts to salad or sandwiches or both.

Forgetting my money last week forced me to get creative and use up everything I could find. This is my favorite way to cook. And who doesn’t love to save money? I usually spend between $60 and $80 at the farmers’ market. Last week, I spent $0 on groceries and we ate well all week long. And now I have more room in the kitchen for this week’s farmers’ market haul.

Check Out My Book

How to make easy tomato purée with fresh tomatoes

My daughter MK and I made one last batch of fermen

For breakfast, my daughter MK loves to eat khichdi

If you read the news at all, scroll through your f

By no means must you grind your own flour in order

Would you buy secondhand sheets and towels? When

Most of the sunflowers I planted in the spring are

Are you grocery shopping today? If you store your

Both my kids are home and cooking basically non-st