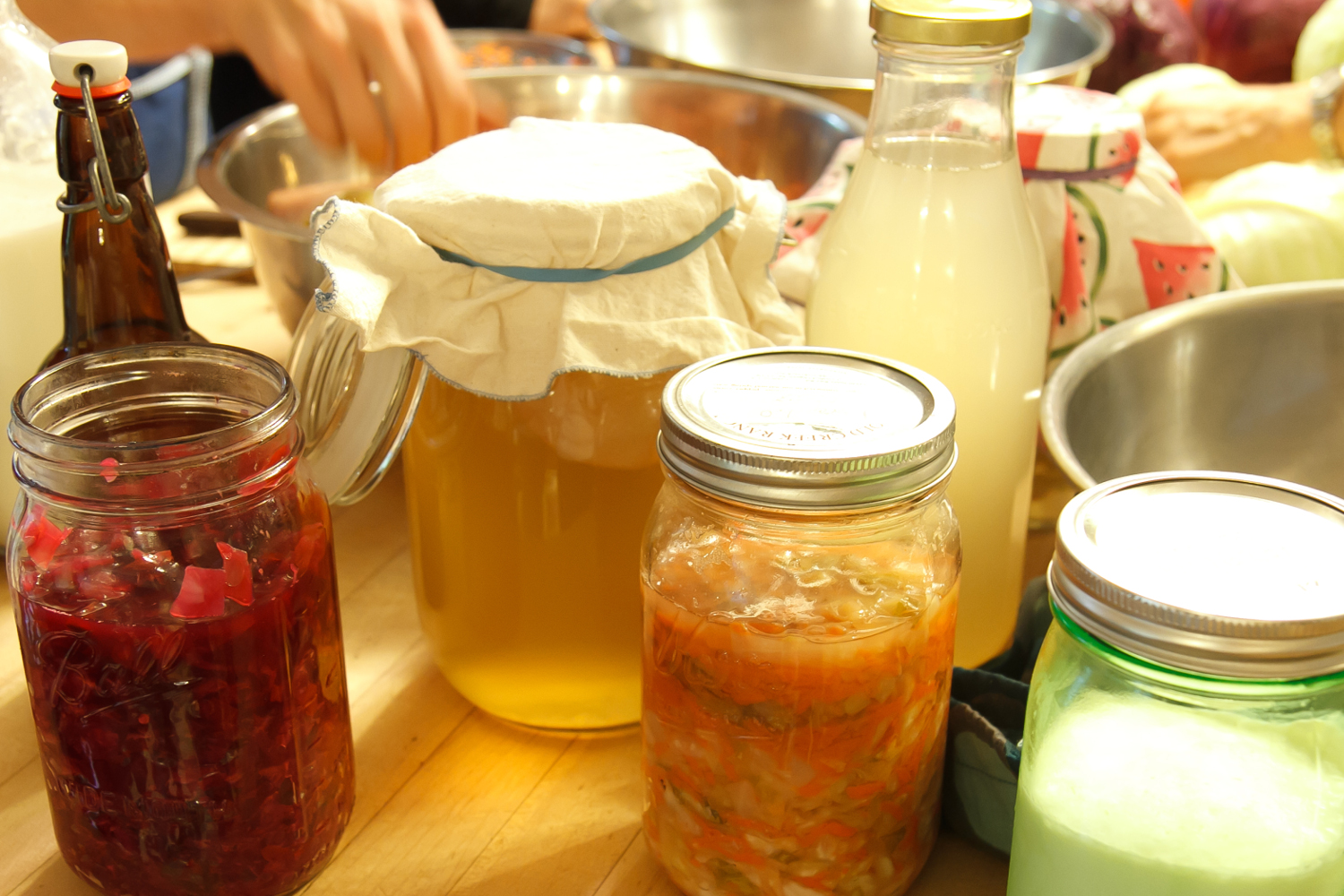 I find fermentation fascinating. I’m pretty much obsessed with it and wish I had discovered it earlier in my adult life (better late than never). I can’t really be too hard on myself though. In just a few generations, we’ve lost (most of) our food-growing and food-preparing skills. Fortunately slow, local, organic, real food has gained popularity and fermentation is enjoying a revival.

My French-Canadian grandmother did not waste a thing. When my dad was little, she made blood pudding from pig’s blood, and head cheese from a whole pig’s head, which may sound totally revolting to most of us, but if you eat an animal, I think it’s best to use every part of it and I imagine these dishes taste pretty good (I’ve never tried them).

If Grandmere did ferment food, that narrative lacks the interest/horror/shock value necessary to cement its rightful place in the family lore. “When I was your age, I had to walk to the market to buy cabbage” just doesn’t leave the same impression on a seven-year-old as “When I was your age, we were so poor, I had to lug a large bucket to the abattoir to collect the blood of slaughtered pigs.” (Sounds very biblical—we were hardcore Catholic.)

I would be surprised if my grandmothers (who would be over 100-years-old today) didn’t ferment. It’s what cooks have done for thousands of years until Big Food stepped in to make cooking easier and our lives more convenient—and less healthy, less social and less pleasurable.

Why should you ferment food?

1. Food preservation. A head of cabbage will rot in a week or so. Chop it, salt it and submerge it in its own juices for a few days and you’ll have sauerkraut, which keeps for many months (you’ll likely want to ferment it longer in order to benefit from more good microbes, but it will transform that quickly). Lactic acid bacteria (LAB), which occur naturally on all vegetables and increase after harvest, perform the fermentation.

Before the recent introductions of refrigeration and chemical preservatives last century and canning a century before that, people fermented or dehydrated food to preserve it. This was especially important in cold climates with short growing seasons. People could enjoy vegetables throughout the winter by fermenting them at the end of the summer. Cold weather slows down the fermentation, preserving the food longer, making this method a perfect, seasonal and natural fit in these parts of the world.

2. Health benefits. Fermentation pre-digests food (it’s actually controlled rotting) and this makes certain nutrients more available for absorption. Fermented vegetables contain higher levels of B vitamins, such as thiamin, riboflavin and niacin. Why did Captain James Cook bring barrels of sauerkraut on board his ships? Because fermentation helps preserve vitamin C, the lack of which causes scurvy.

In addition to increasing and preserving nutrients, fermentation also reduces anti-nutrients. Phytates—present in grains, nuts, seeds and legumes—bind to minerals, making those nutrients unavailable for absorption. Fermentation breaks these bonds so the body can absorb the previously unavailable nutrients. And of course, microbes improve your gut flora. To learn more about the importance of a healthy gut, read Michael Pollan’s article in the New York Times.

Personally, I think fermented foods work wonders but I have only my own anecdotal evidence to offer. Since I cleaned up my diet in 2011 (I cut out all processed foods) and increased my intake of fermented foods, I have not been sick. Not one sniffle. In my zealous devotion to fermentation however, perhaps I have overlooked other factors and overplay the role of good microbes on my good health. As my daughter said recently, after I expounded (yet again) on the miraculous benefits of fermentation, “If all you ate were Big Macs and sauerkraut and were sedentary, you’d be [expletive].”

3. Savings. My daughter loves Bubbie’s Pickles. These fermented cucumbers (as opposed to they typical shelf-steady pasteurized ones submerged in vinegar) taste delicious but cost a small fortune. Not that you shouldn’t buy them! If you don’t want to ferment cucumbers but want pickles, buy some like Bubbie’s! The company also sells delicious sauerkraut. I may have this wrong, I think a large jar of Bubbie’s sauerkraut costs about six or seven dollars. I can make a few jars of sauerkraut for about four dollars.

I also preserve lemons, which cost quite a bit, if you can even find them in a grocery store. And crème fraîche? A small tub in my neck of the woods commands seven dollars. I have a quiche recipe that calls for three tubs. I make my crème fraîche with a cup of heavy cream and a quarter cup of cultured buttermilk. That costs less than three dollars and I have no plastic tub to deal with (I live plastic-free).

4. Low energy consumption, low-tech. Fermentation preserves food, enhances flavor and increases nutrition, all without consuming energy. I’m no fan of Big Oil, but Big Ag also plays a massive role in climate change and we hear less about that. Our current industrial food and farming system (according to some studies) generates 35 percent of CO2 emissions, while agricultural-driven deforestation generates another 20 percent.

To me a jar of homemade sauerkraut isn’t just a tasty, healthy snack. It’s a protest of our current broken food system. An act of defiance. I’m not saying fermentation will save the world. But I do believe preparing food this way does put you more in tune with the natural world. The food is alive after all. Plus fermentation requires few tools—a knife for chopping and a jar for storing will suffice—and increases your self-sufficiency.

If you don’t currently ferment anything and I’ve convinced you to give it a try, please check out my posts on these easy ferments, listed in order of difficulty, from “ridiculously easy” to “very easy” to “still pretty easy”:

You may also want to check out Sandor Katz’ website and his book, The Art of Fermentation, my fermentation bible (yet another religious reference). Most of the facts in this post come from this book.

33 Replies to “5 Reasons to Ferment Food”