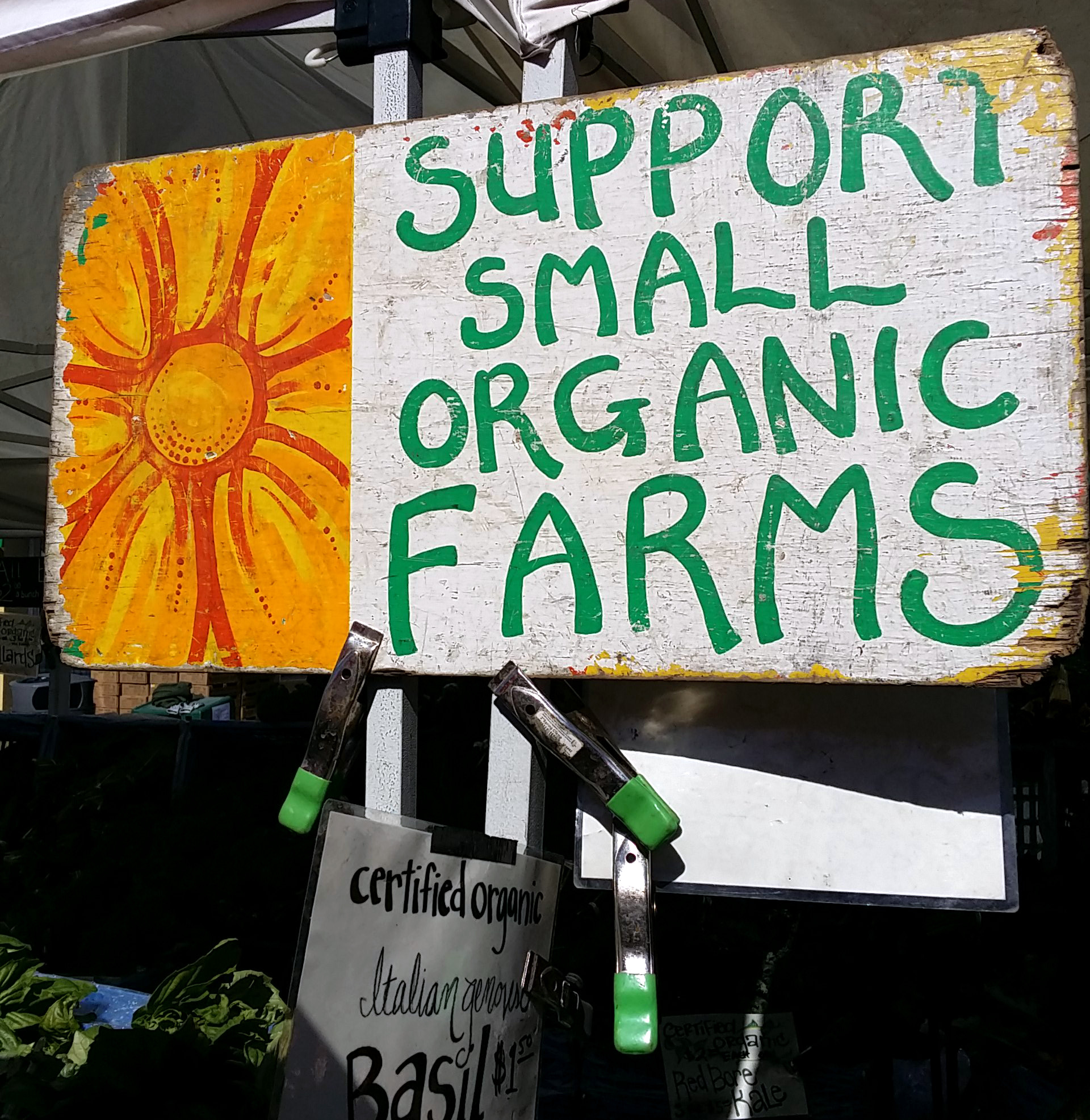 Pictures of my farmer’s market hauls on Facebook and Instagram are often my most popular posts. Regularly someone on there will ask how I prep and store my fruit and vegetables so I thought I should write a blog about it. By doing a bit of prep when I return home with my goodies, my week runs smoother and I reduce food waste.

In the haul pictured above, I bought the following:

And This Is What I did with Them

1. Strawberries: Wash, halve and either eat quickly or freeze

I deal with berries first as they turn very quickly. Do not store them in the refrigerator as that will speed up their demise.

I wash berries in a big pot of water. I set some aside to gobble up and with the rest, remove the stems, halve them, spread them out on a cookie sheet and then freeze them. By freezing the berries in a single layer, I don’t wind up with a frozen clumpy mess that I can’t pry apart. Once the berries have frozen, I transfer them to jars for the freezer. I always use wide-mouth jars. I can clean them easily and reach in to grab stuff. More importantly, I have never had one break in the freezer. I once froze some liquid in a narrow-neck bottle, the liquid expanded and the beautiful bottle broke.

I also freeze cherries, blueberries, grapes and peach slices this way. I enjoy the convenience of frozen fruit without the wasteful plastic packaging.

2–3 Apples and pears: Store at room temperature or in the refrigerator

I continue to wash fairly clean produce in the strawberry water. I plopped apples and pears in next. I store those in a hanging basket. When I pack a lunch or want a snack, I just grab a piece of fruit and go. Apples do keep longer in the refrigerator but I rarely buy more than we can eat in a week so I don’t need any type of long-term storage. If I ever own a farm with apple trees, hopefully I’ll also have a cold cellar.

Next up, I washed cucumbers. I had been storing them in the refrigerator but when researching a bit for this post, found out that cool temperatures speed up their decomposition. Oops! I’ll put these in my hanging baskets from now on.

5–6 Green beans and radishes: Prep and store in the refrigerator

Next I washed the green beans and radishes in the still-clean water. I trimmed the beans, cut them in half and then put them in a jar in the fridge. I prepped the radishes the same way. Your week will go much smoother if you have some prepped vegetables ready to go. When I buy carrots, I wash them and trim off the ends but wait to chop them until I need them. I find they dry out a little bit if I chop them in advance. I don’t chop onions in advance either for the same reason. I store these vegetables in glass containers and jars.

When I prep vegetables, I save all the little bits and ends and store them in glass jars in the freezer. When I have amassed a large pile of scraps, I make vegetable broth. I haven’t bought vegetable broth in years.

7–8 Potatoes and onions: Store in a cool dark place away from each other

I saved the dirtiest for last. After I washed the potatoes, I took the water outside and watered my Bougainvillea. Potatoes keep well in a dark, cool place. I store mine in a homemade cloth produce bag in the pantry. The pantry isn’t super cool but it is dark.

Onions I simply pull out of their cloth produce bag and place in my hanging baskets away from potatoes. Potatoes and onions stored in close quarters produce a gas that speeds up their demise. 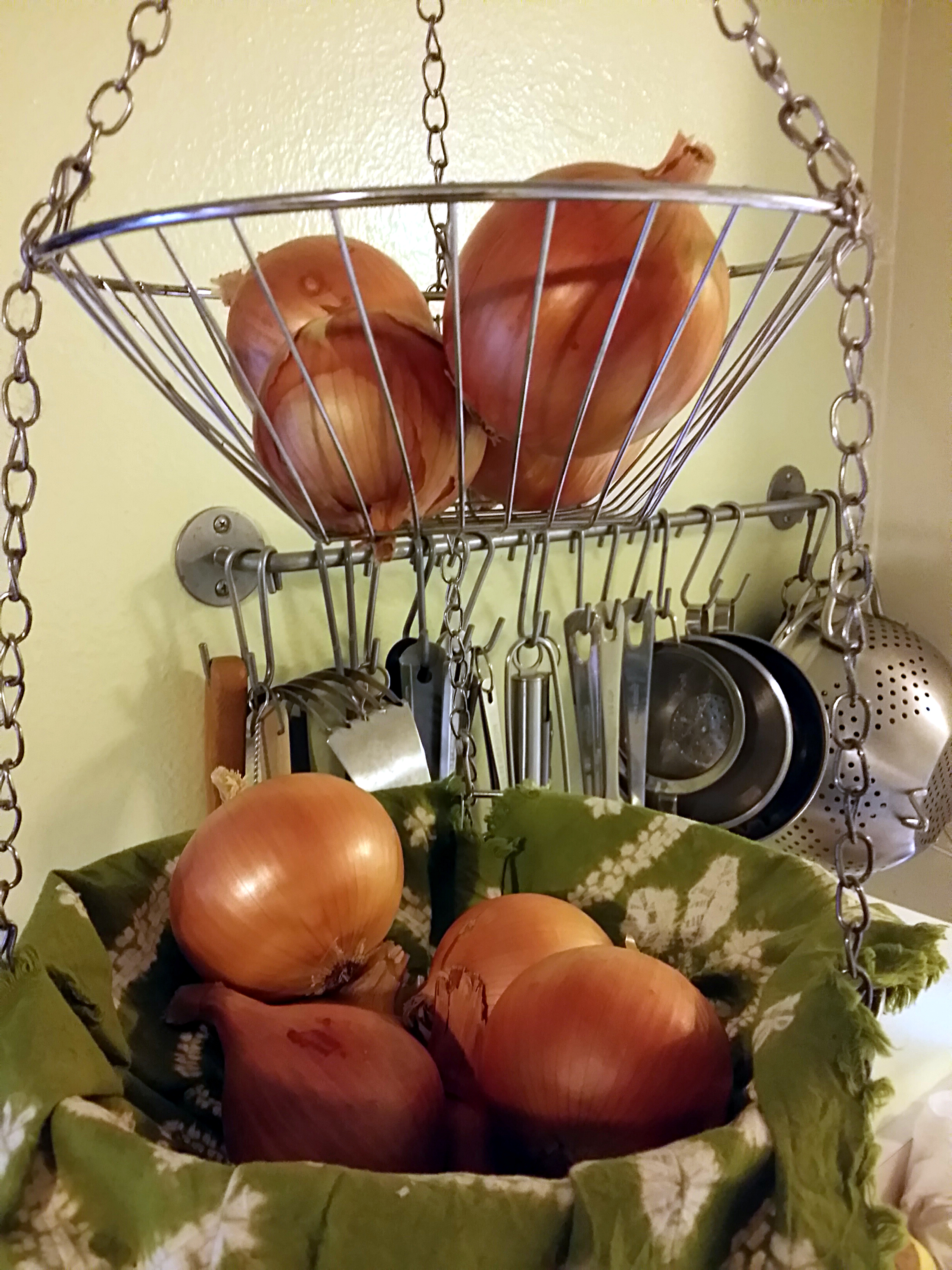 I had been storing these in the refrigerator after washing them but like the cucumbers, apparently peppers deteriorate quicker in there. Good thing I wrote this post and discovered this! So I’ll keep these out of the refrigerator from now on. I’m going to need another hanging basket…

Store in a cool, dark place. I have one sitting on my dining room table at the moment. It looks purdy.

I merely store these in the fridge. However later on I did make krautchi—a cross between sauerkraut and kimchi—with the cabbage. In a perfect world, I would have made it at the same time as I prepped everything else but I can do only so much… One of the wonderful things about sauerkraut and krautchi is that once ready, you have a little side dish ready to go stashed away in the refrigerator.

If you want to waste less food, learn how to ferment it (so, so easy!). A cabbage in the refrigerator will eventually rot after a few weeks. Ferment it and it will last for at least a year. Here’s my sauerkraut recipe. My krautchi also contains cabbage, carrots and radishes like my sauerkraut but I also add lots of garlic and ginger and a jalapeño (if in season) or cayenne pepper.

14 Tomatoes: Store at room temperature or roast and freeze

I store tomatoes at room temperature. They lose their flavor in the refrigerator. However the 10 pounds I bought would rot on the counter before we would eat it all. I bought a large amount so I could roast and freeze them and enjoy them later out of season. (Ideally, I do this every couple of weeks until I have roasted and frozen loads of tomatoes). These replace canned tomatoes. People often ask me how I survive without canned tomatoes. I don’t buy canned food as the cans are lined with BPA or and alternative that’s just as bad. Plus canned food tastes bad in my opinion.

I buy small dry-farmed tomatoes at the market, half or quarter them, roast them around 275 degrees Fahrenheit for 1 1/2 to 2 hours, until softened, sweet and roasted. Then I pack them in jars and freeze. That’s about all there is to it, but here’s a separate post on these if you’d like to know more.

I didn’t actually buy leafy greens in this particular farmer’s market haul but I often do. I find leafy greens the hardest thing to deal with. I used to have a CSA years ago and usually when I opened the box, I would find a bunch of greens and throw my hands up in the air. I know they’re super healthy but the box often looked like a pile of rabbit food.

For leafy greens like kale and spinach, I’ll soak them in my large container of water, drain them, place them in a cloth produce bag which I take outside and twirl around to dry. I then store the bag in the refrigerator. This saves me SO much time later in the week when I want to make a salad.

A final note on food storage and prep: If you buy less food, you will waste less food.

23 Replies to “Farm to Fridge (or Freezer or Hanging Basket)”