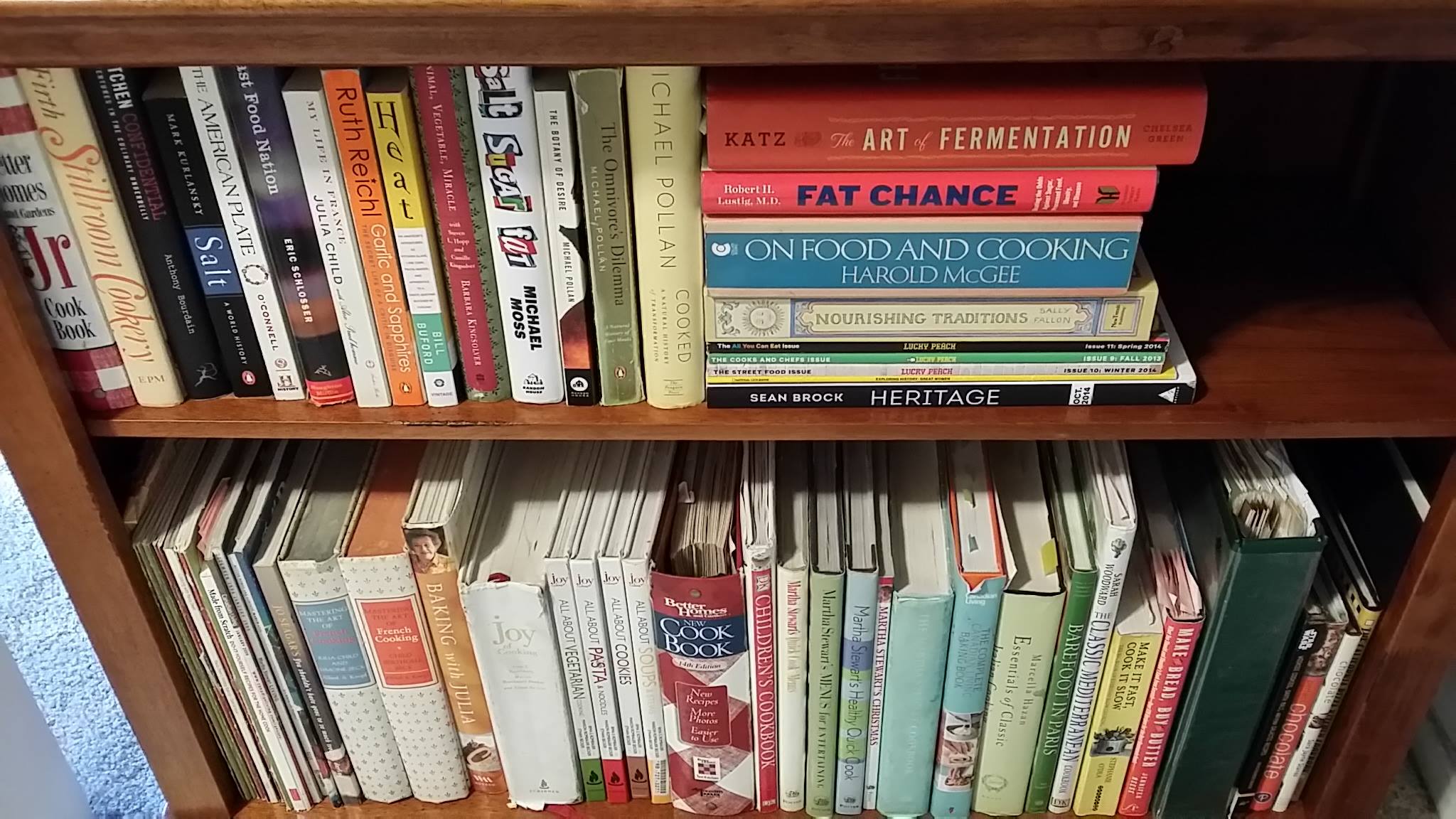 “When I have a little money, I buy books; and if I have any left, I buy food and clothes.” ― Desiderius Erasmus

I have wanted to write a post with book recommendations on the topics of simplicity and food—I cannot separate the two—since I began writing my blog. I haven’t read all the books that I would like to include on this list and since I have no idea when I’ll get around to reading all the books I would like to include, I’ve decided to write more of a books-that-got-me-here kind of post.

1. An Autobiography: The Story of My Experiments with Truth, Gandhi

This one started everything. When MK was about six months old, I took a religion class on Gandhi at McMaster in Canada and immediately adopted Gandhi’s motto of “Simplify, simplify, simplify.” Believing that through self-reliance India could overthrow oppressive British rule, Gandhi urged his fellow citizens to spin their own cotton rather than buy expensive British cloth. Thus the spinning wheel became a symbol of his non-violent resistance movement, or satyagraha.

Sound familiar? Here in the US, we live under the thumb of corporations, which basically run the country and pay politicians to both represent them and act as their public relations agents. Grass roots efforts can change this. Engage in acts of rebellion: grow your own food; make sauerkraut; bake bread. You’re not merely feeding yourself. You’re participating in a movement.

2. Simplify Your Life: 100 Ways to Slow Down and Enjoy the Things that Really Matter, Elaine St. James

I read this little book soon after finishing my Gandhi class and implemented many of St. James’ ideas: reduce the clutter in your life; turn off the TV (I sold the TV); don’t answer the phone just because it’s ringing; build a simple wardrobe; stop sending Christmas cards; throw out everything but the aspirin; and so on.

3. Fast Food Nation: The Dark Side of the All-American Meal, Eric Schlosser

When I read this, I thought to myself, “I want to write about the food system!” In my favorite section of this book, Schlosser brilliantly muckrakes his way through the meat-packing industry, exposing abuses from speeding the line up to life-and-limb threatening levels, to workers ordered to clean hazardous waste with zero protective gear, to the one-liner I will never forget: “There is shit in the meat.” Upton Sinclair’s classic The Jungle has sat on my reading list since I read Fast Food Nation. I’ll get around to it one day.

Michael Pollan and his books changed my life. When I met him earlier this year after a lecture, my knees shook and I rambled like a fool. As I explained to my 14-year old later that night, “It would be like you meeting One Direction.” The Omnivore’s Dilemma describes in fascinating detail and eloquent, can’t-put-it-down writing, our current, utterly horrifying American industrial food system. This book changed how I eat.

I found Pollan’s more recent book Cooked: A Natural History of Transformation equally engrossing. I follow his sourdough bread recipe in Cooked, which he bases on Chad Robertson’s recipe in Tartine Bread. I own a copy of that book also and highly recommend it. The numerous pictures of sourdough at its various stages coach you through the process.

5. The Third Plate: Field Notes on the Future of Food, Dan Barber

One review I read of Dan Barber’s book described it as “The Omnivore’s Dilemma 2.0.” That sounds pretty accurate to me. I also met Dan Barber this year after a lecture (and, star struck, embarrassed myself). He’s brilliant. You can read about that lecture here. Barber says we need to stop demanding from the land the food we want to eat and rather, eat what the land produces. For example, to prepare the soil for growing emmer wheat, farmers will first plant rotational crops, such as clover, mustard seed and barley. While these enrich the soil, they do not nourish us, as we eat only the final emmer wheat and waste the rest. What a crazy system! Barber is out to change it.

6. Plastic-Free: How I Kicked the Plastic Habit and How You Can Too, Beth Terry

MK and I love Beth Terry, the force behind the blog My Plastic-Free Life. Back in 2011 or so, I had wanted to go plastic-free but had no idea where to start. Then MK found Beth’s blog. It was just what we needed. Her book Plastic-Free outlines you everything you need to do to cut the plastic. I haven’t read Colin Beaven’s book No Impact Man, but I did watch the documentary soon after going plastic-free and really enjoyed it (he has a charming wife). The Story of Stuff, another good read, will inspire you to cut your plastic.

Although I live in the heart of frantically paced, high-tech Mecca Silicon Valley, I have talked about dropping out of society and living off the land for decades. In this book, at least I could read about it. And it does not sound easy. (I still want to give it a try…) The brilliant Kingsolver and her family move to a farm for a year in South-West Virginia and grow or raise almost all of their food themselves. What they can’t provide for themselves, they obtain from neighboring farms.

I also loved Kingsolver’s masterpiece work of fiction, The Poisonwood Bible. That book traces the origin of the problems in The Congo to food. Basically, when the Portuguese arrived and found a localized food system, they took this as evidence of the people’s “savagery” and showed them the “proper” way to grow food (i.e, centralized). Read both if you haven’t!

I simply LOVE Dr. Robert Lustig. This book followed up his viral YouTube video “Sugar: The Bitter Truth.” In the book, Lustig explains the biochemistry of sugar on our bodies and its effects are downright scary. About 80 percent of processed food contains added sugar and most Americans eat a diet of heavily processed “food.” I didn’t eat sugar for weeks after I finished reading this. But it slowly crept back in. Time for a refresh. Lustig appears in the documentary Fed Up, which basically sums up many of the points in this book. If you like this video, book or documentary, you’ll also like Salt Sugar Fat: How the Food Giants Hooked Us by Michael Moss (I sound like Amazon). Salt Sugar Fat explains how Big Food engineers food-like products in order to peddle as much of its poison as possible to a mostly unsuspecting public. It will make your blood boil.

9. Heat: An Amateur’s Adventures as Kitchen Slave, Line Cook, Pasta-Maker, and Apprentice to a Dante-Quoting Butcher in Tuscany, Bill Buford

I actually teared up a little when I finished this wonderful book. Buford, a long-time editor for The New Yorker, left his desk job to work as a kitchen slave in Mario Batali’s famous New York City restaurant, Babbo. The quote on my about page comes from this memoir: “Food made by hand is an act of defiance and runs contrary to everything in modernity.” If you like food and cooking memoirs, you will also like Garlic and Sapphires: The Secret Life of a Critic in Disguise, by former New York Times food critic, Ruth Reichl. I also loved Anthony Bourdain’s Kitchen Confidential: Adventures in the Culinary Underbelly.

10. On Food and Cooking: The Science and Lore of the Kitchen, Harold McGee

Michael Pollan, Sandor Katz, Bill Buford and Anthony Bourdain ALL refer to Harold McGee’s classic On Food and Cooking in their writing. When I visited the Culinary Institute of America (CIA) in Napa last year, I saw at least twenty copies of the revised edition at the bookstore. Our understanding of food has changed quite a bit since 1984 when McGee first wrote this. For example, we now realize that the low-fat fad has wreaked havoc on our health—it led to massive amounts of sugar added to make the low-fat stuff palatable, which has led to obesity (see #8 Dr. Lustig). I have the original edition but would love to get my hands on the new version and compare.

Chefs will refer to this food bible when they want to figure out how heat, cold, certain ingredients and so on, will affect a dish. However, home cooks will also enjoy reading about the history and science of food.

So why include this one? I feel that when we appreciate cooking and understand the science behind it, that understanding connects us to the natural world and brings us joy. Opening a frozen pizza and shoving it in the oven cannot do this. Yes, I understand some people have little choice but to eat convenience, food-like products. Some work two jobs just to pay the rent, while many others have been rendered helpless in the kitchen. That’s another blog post…

11. The Good Gut: Taking Control of Your Weight, Your Mood and Your Long-Term Health, Justin Sonnenburg and Erica Sonnenburg

I wrote a review of this book earlier this year. When I read Michael Pollan’s tweet “If you’re going to read one book on the microbiome, this is it: The Good Gut by Justin Sonnenburg & Erica Sonnenburg,” I called my independent bookstore and ordered this immediately (it had yet to be released). Basically, your physical and mental health is tied to your gut microbiota, the microbes living in your large intestine. The Sonnenburgs, pioneers in gut microbiota research, discuss not only the fascinating science of our guts but also provide menus that outline what they eat and feed their children: unprocessed, real food, including ferments like kefir, yogurt, cultured butter, sourdough bread and real pickles.

12. The Art of Fermentation: An In-Depth Exploration of Essential Concepts and Processes from Around the World, Sandor Katz

And now we arrive at my bible. If you read my blog, you know I am obsessed with fermentation. I believe that anyone simplifying their life will eventually stumble onto fermentation, an ancient technique to prepare food that, thanks in part to Katz (and Sally Fallon…more on her below), is undergoing a revival. With all of the science emerging on the importance of a healthy gut—science that will revolutionize human health—fermentation is about to explode, although hopefully not literally because believe me it’s not fun cleaning kombucha off the walls and ceiling.

I also refer often to Nourishing Traditions: The Cookbook That Challenges Politically Correct Nutrition and the Diet Dictocrats and recently purchased Nourishing Broth: An Old-Fashioned Remedy for a Modern World, both by Sally Fallon. These and Sandorkraut’s book expound a the virtues of a diet rich in traditional foods. I know I am healthier since adopting a more traditional diet.

That’s what happens when I talk books.

As I said, I have not written a comprehensive list here. But I hope a theme has emerged from my selections. I think they all share the following ideas: when you cut the processed food, you cut the packaging and vice versa; real food becomes your only option. And rebellion tastes delicious 🙂