When we cut the plastic back in 2011, I swapped many store-bought foods for homemade versions, such as:

If you love pasta and start on the zero-waste path, finding a replacement for it can pose one of your first dilemmas, as many bulk stores don’t carry pasta.

I have good news and bad news.

The good news is you can easily make pasta at home and you don’t need fancy equipment to do so. You really need only a wooden board, a rolling pin and a knife.

And now the bad news: Once you’ve tasted your homemade pasta, you’ll never want to eat store-bought again. Don’t say I didn’t warn you. Homemade does require a bit of time but tastes so so good. The difference in flavor and texture is like the difference between a homegrown tomato you pick off the vine in August versus a store-bought tomato you buy under the harsh fluorescent lights of a supermarket in January.

Here is the short version of the recipe

Combine 1/2 cup white flour and 1/2 cup semolina flour. Make a well in the center and crack two eggs into it. Mix eggs and flour and form a ball. Knead for about seven minutes. Rest for several minutes. Roll out into a very thin rectangle. Roll the rectangle up in to a tube. Slice off noodles. Cook in boiling salted water for two minutes. This will feed about two people.

Now for the long version with lots of pictures…

For this post, I used half white flour, half semolina. Most people have white flour on hand and you can use 100 percent white. It makes delicious pasta. I think the semolina tastes even better. You can’t go wrong with either one though. I use unbleached white flour, not 00. I don’t have anything against 00, I just don’t usually have it in my pantry.

1. Combine flours in a bowl and make a well in the middle. Crack two eggs into it. If you are more coordinated than I, do all of this directly on the wooden surface you’ll knead the dough on. 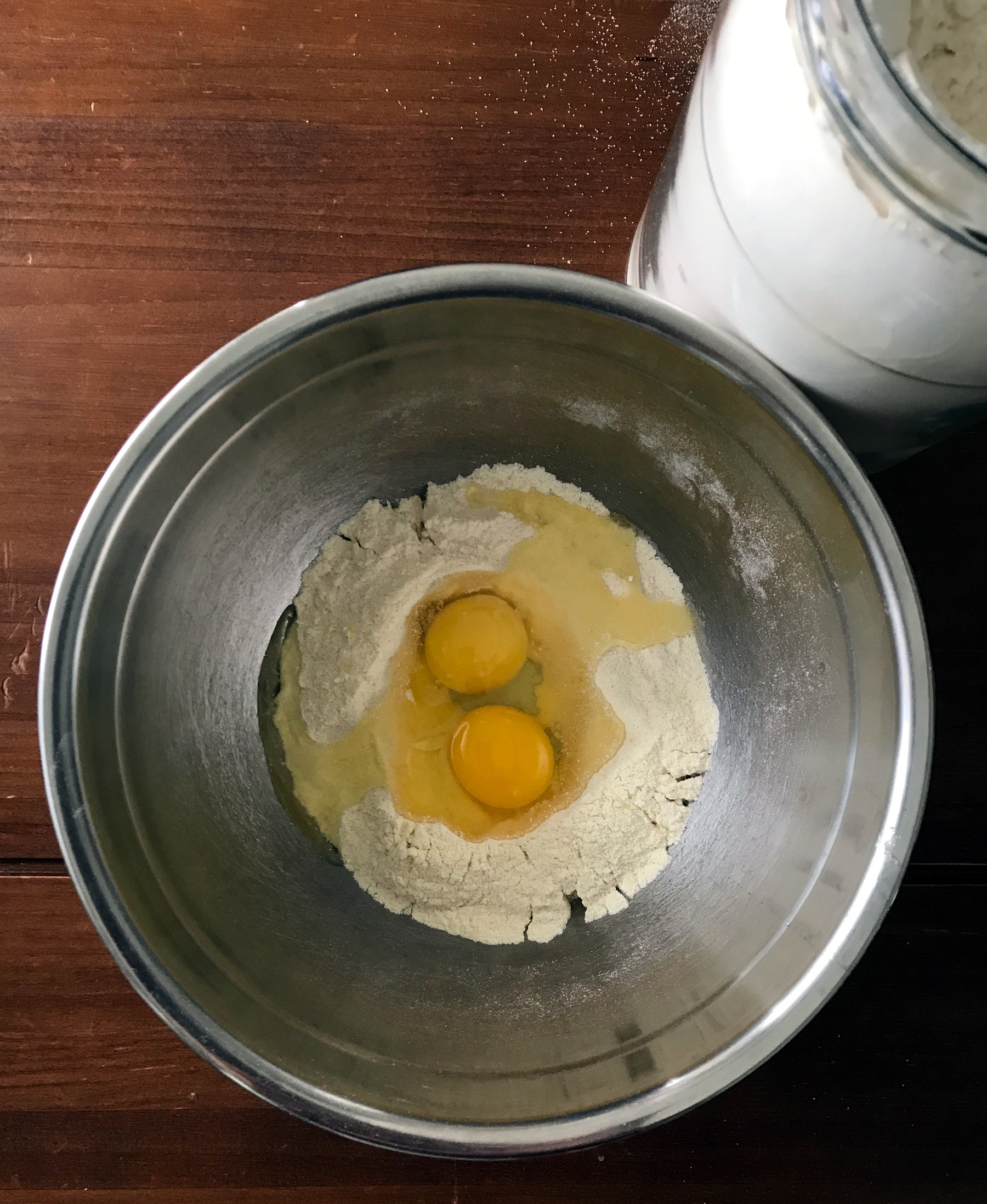 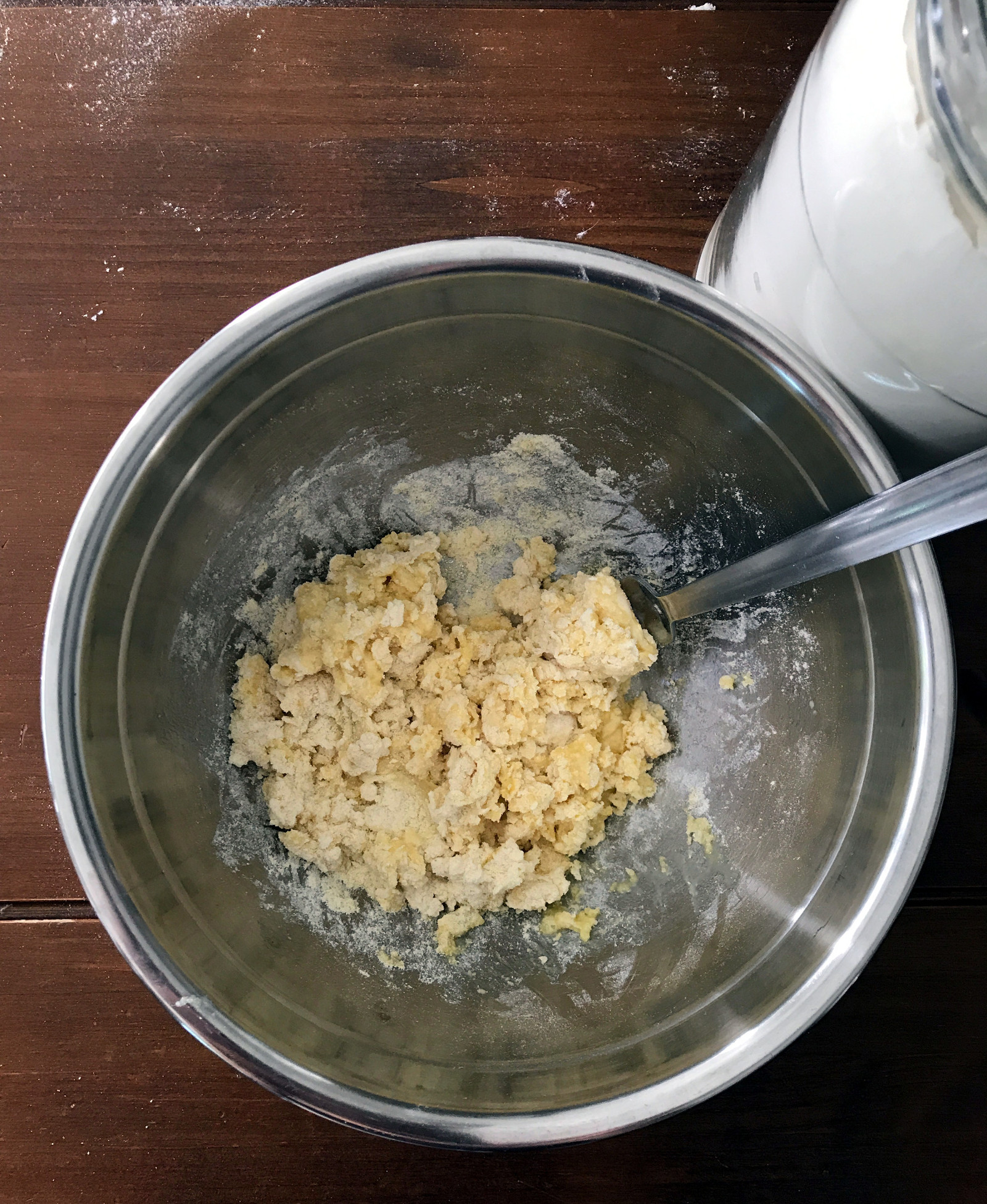 3. Turn out the dough onto a floured surface and knead for about seven minutes or until the dough is smooth and elastic. As you knead, add more flour to your work surface as necessary. You don’t want sticky dough. If you make bread, this dough will seem much more stiff. That’s what you want. In the pics below, you can see (I hope) the dough transforming from a mass of sticky chunks to a smoother blob. 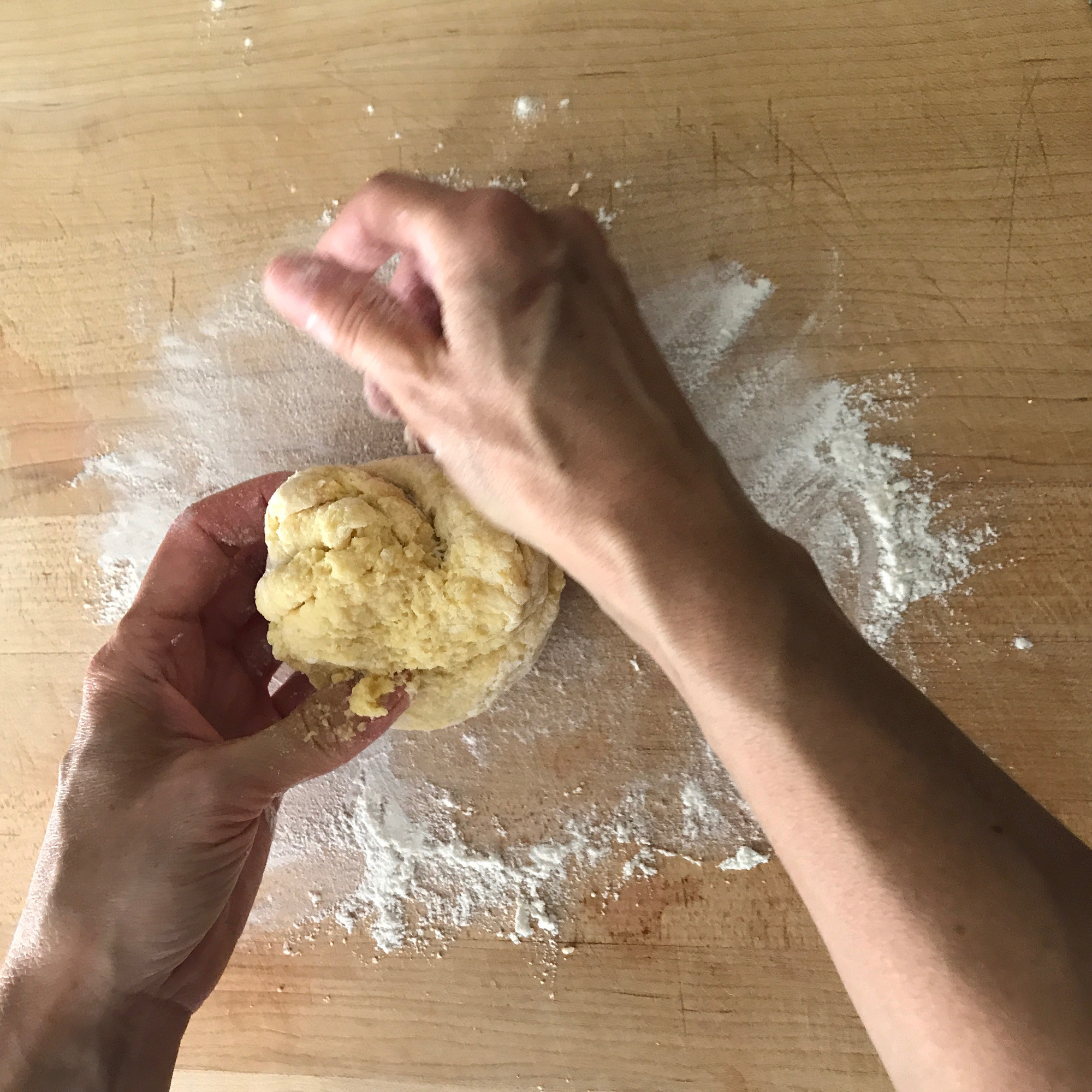 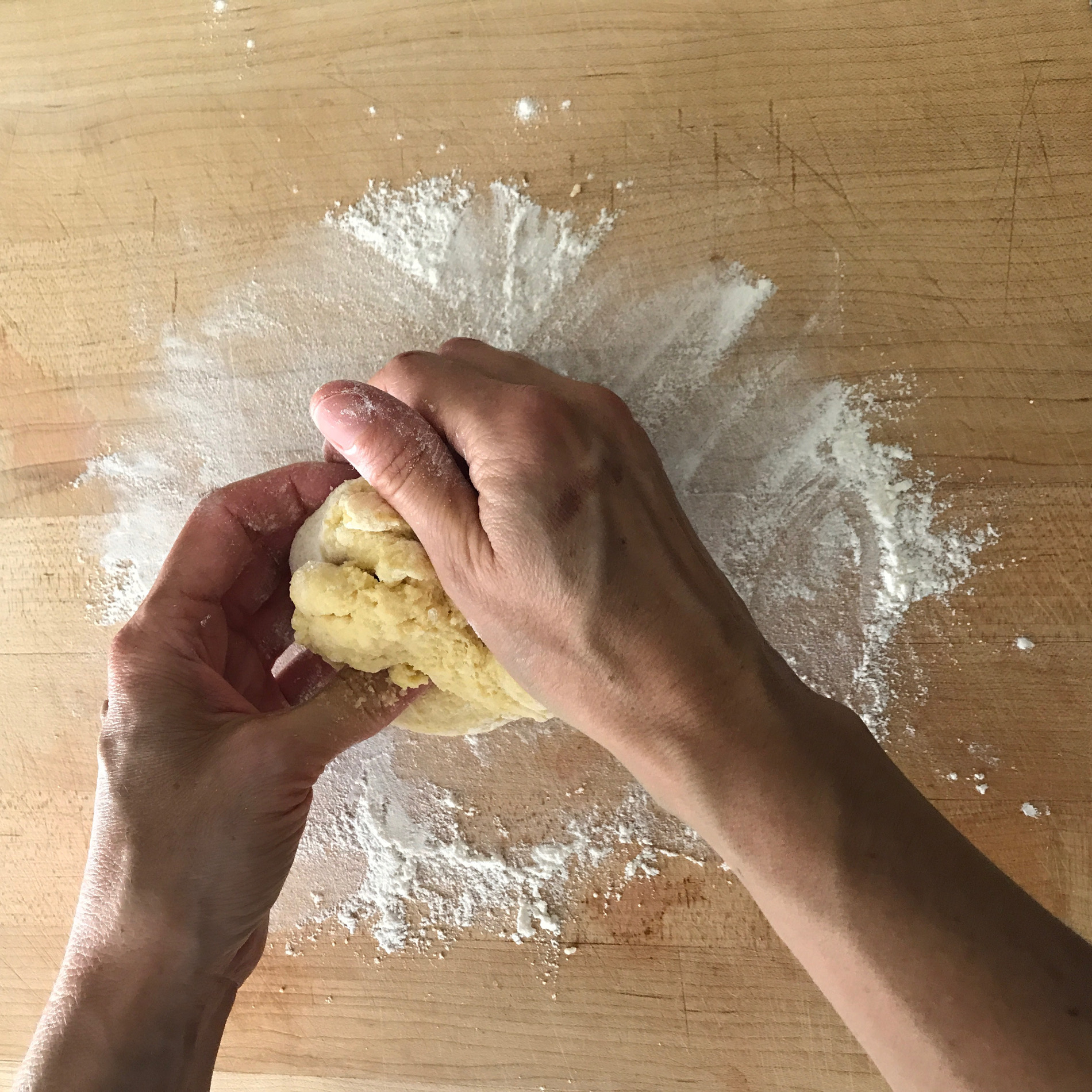 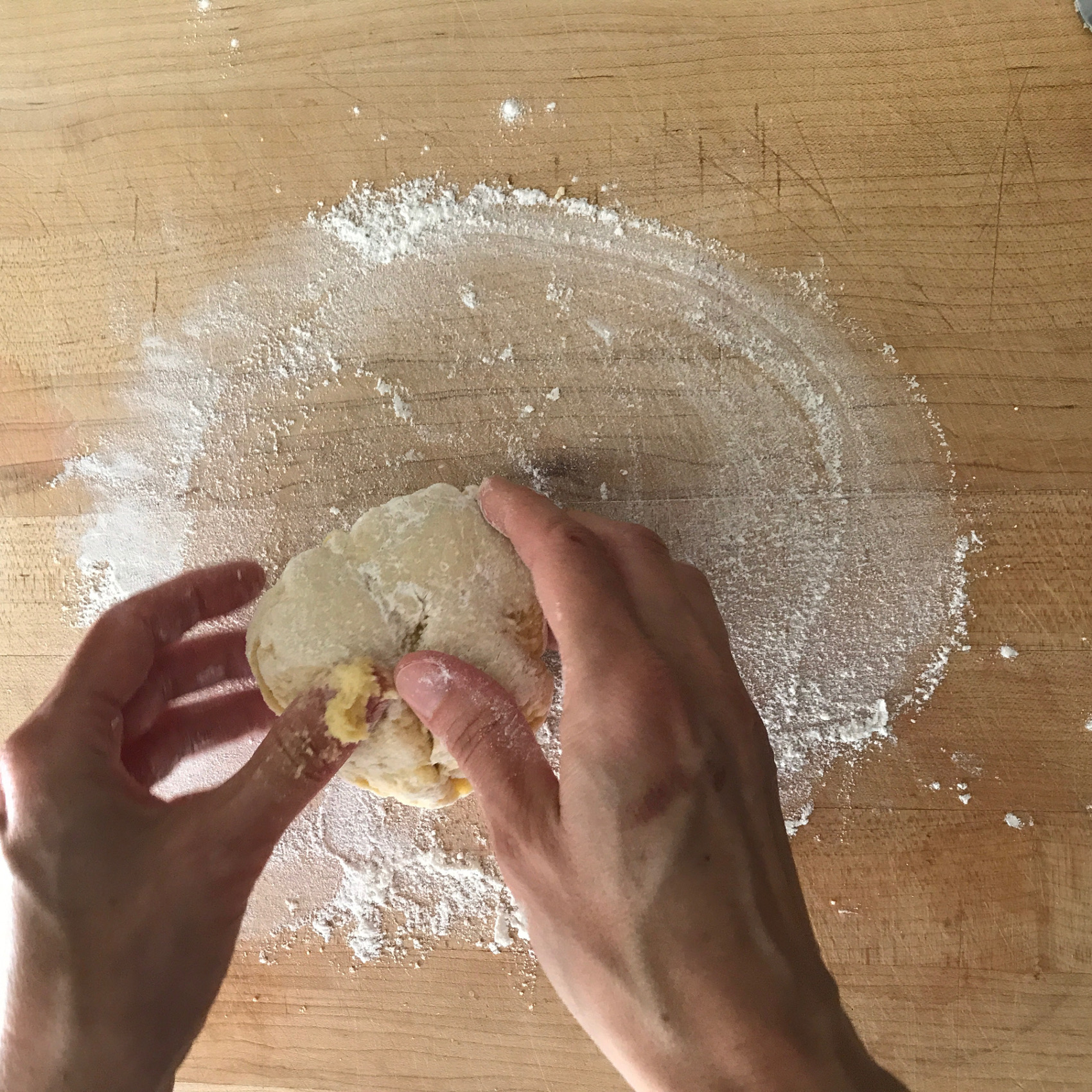 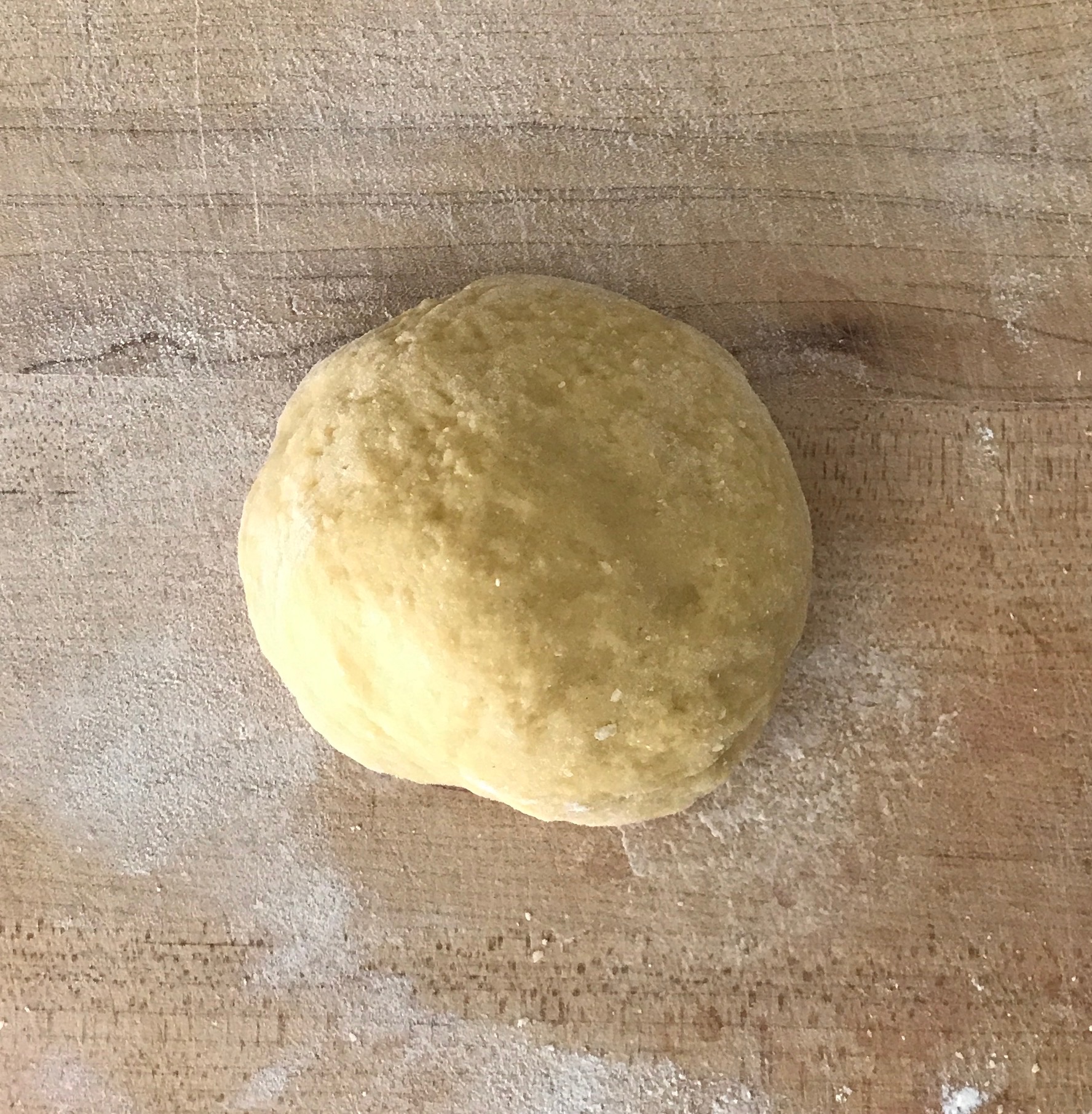 5. Divide the dough into two equal portions. The smaller portions make the dough easier to work with. 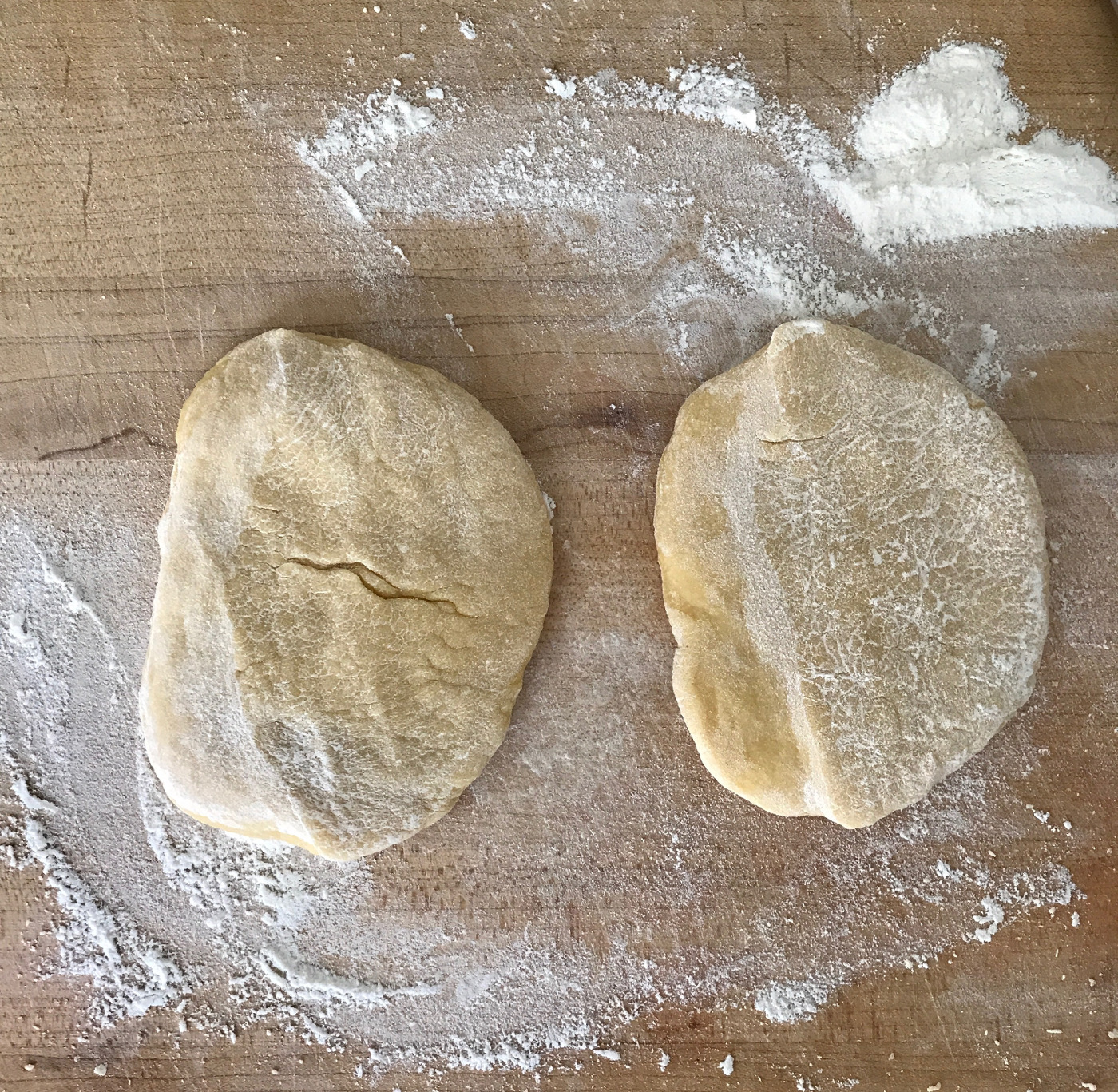 6. Roll out the first portion as thinly as you can into a rectangle (more or less). I was able to get the dough below down to about 1 mm thick. Dust with flour as necessary as you continue to roll out the dough thinner and thinner. You don’t want it sticking to your rolling pin or your work surface. 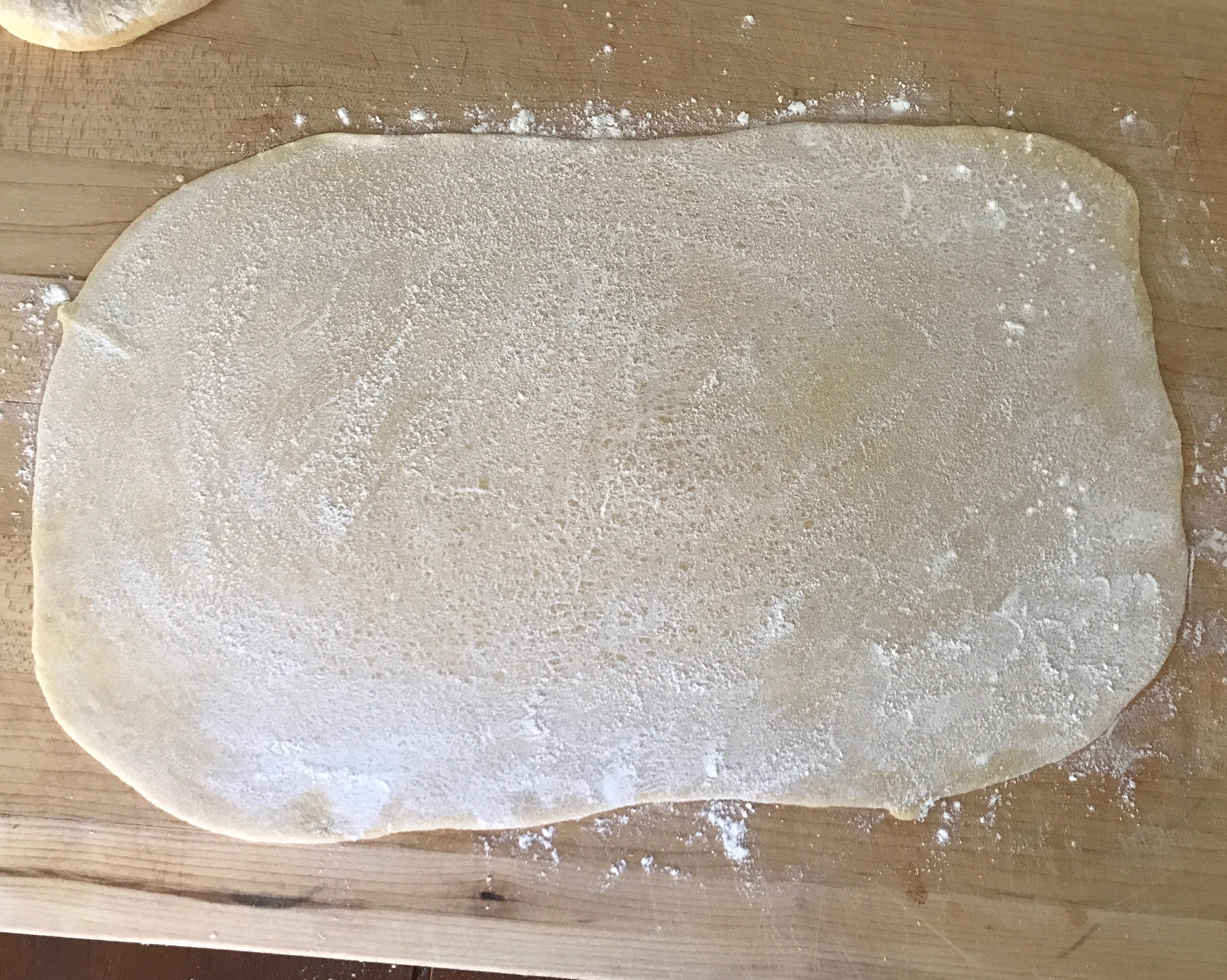 7. Dust with more flour if necessary and roll up into a log. 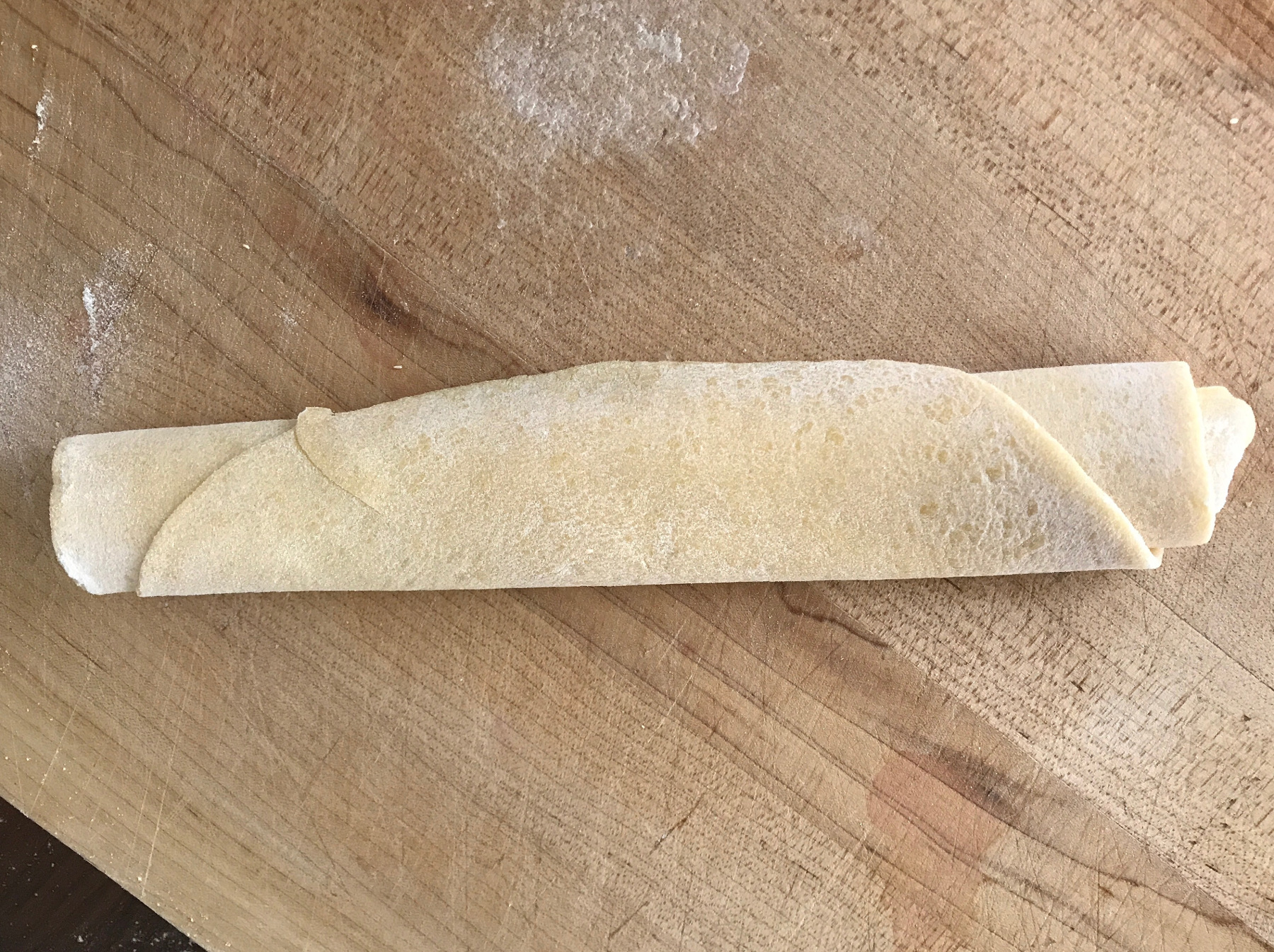 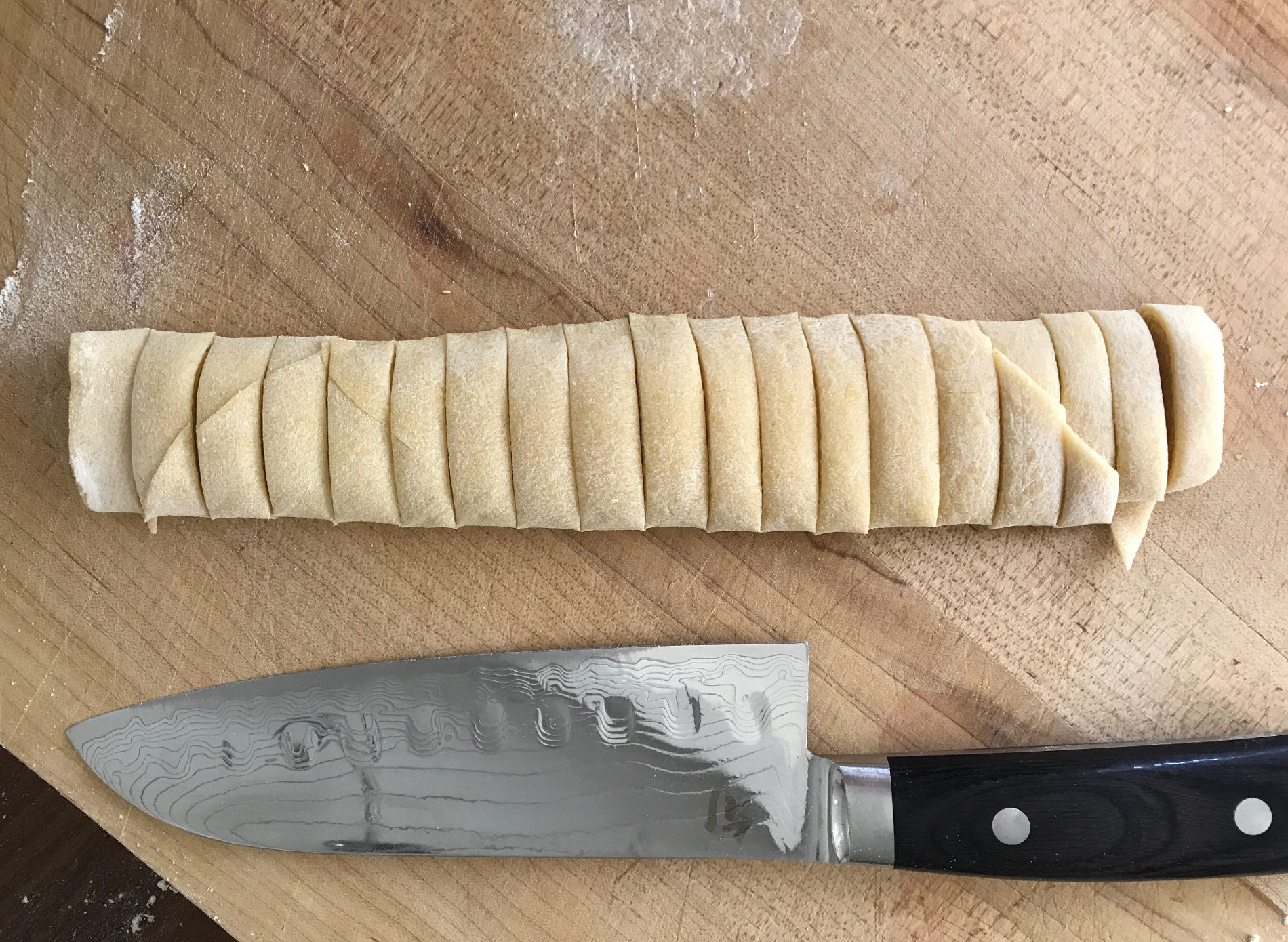 9. Unwind your noodles. That’s it! You’ve made your own pasta. 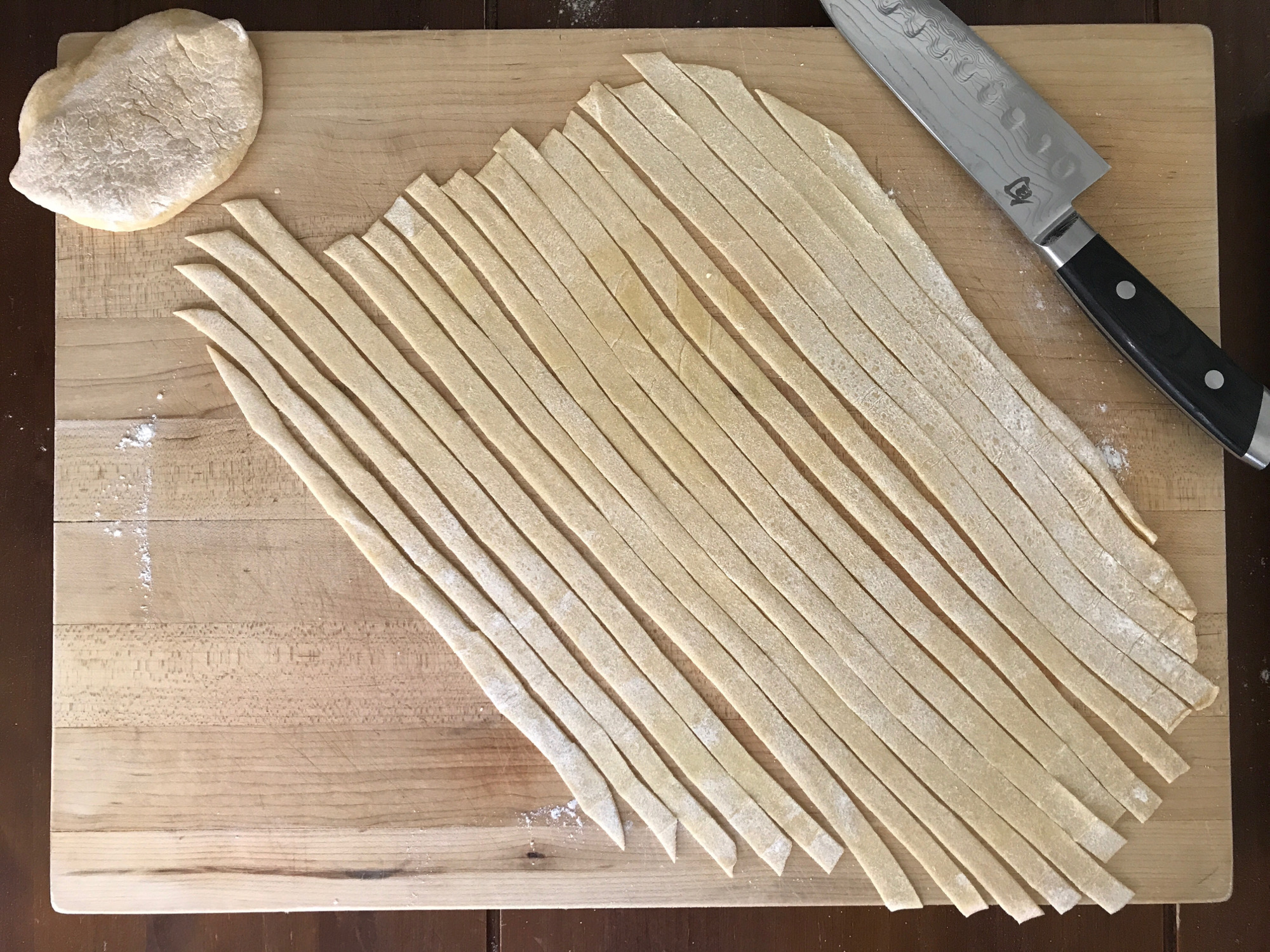 If you’re not cooking right away, toss the noodles with more flour and turn handfuls into nests. Let them rest for about half an hour to dry out a bit. 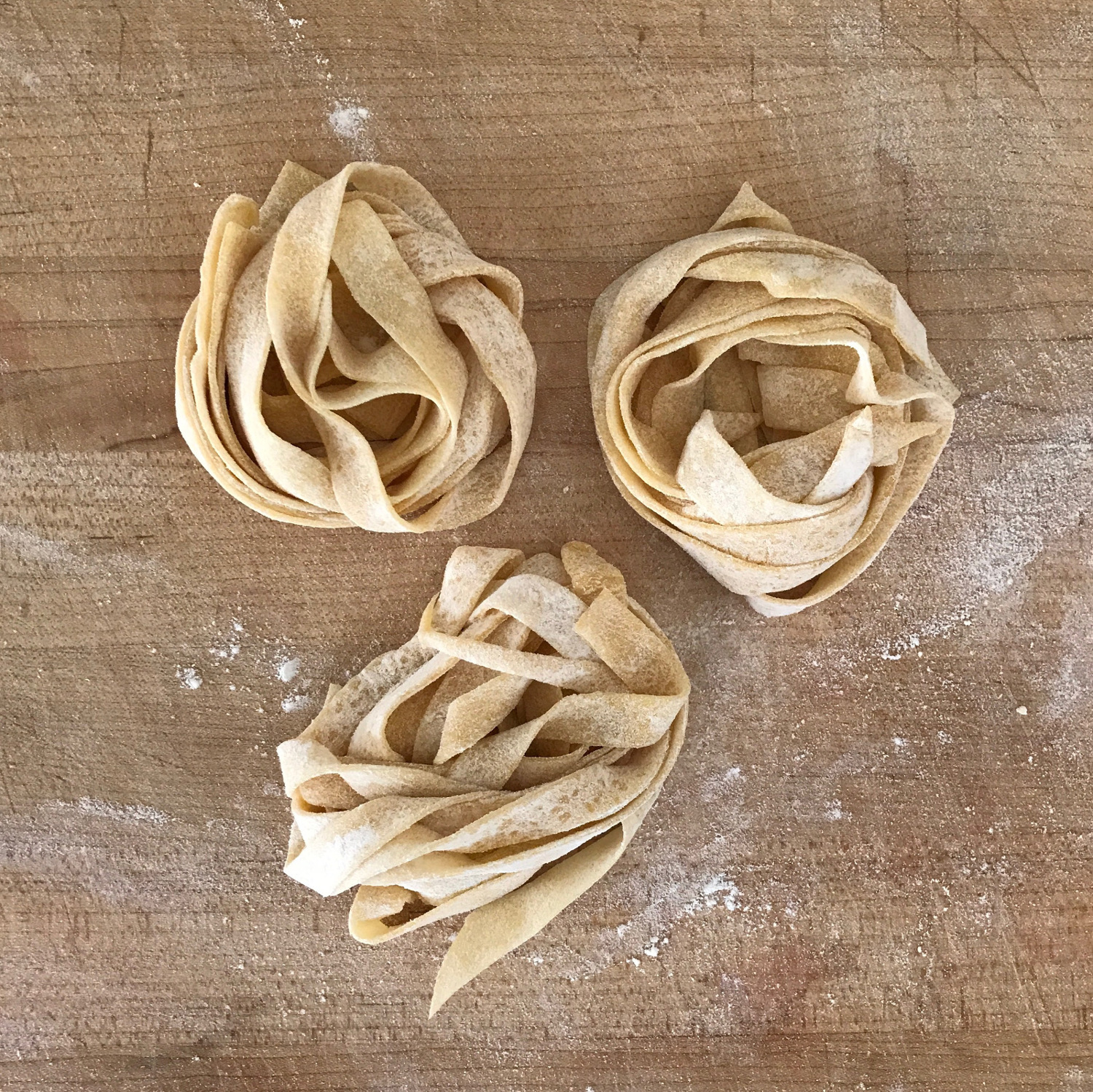 If you have a pasta maker, use that. It really does make perfect noodles. But before you invest in one, I’d suggest making pasta by hand as I’ve done here. And if you want a great deal on a pasta machine, look in thrift shops. I see these regularly. People often buy them, never use them and then just give them away.

Cook in boiling salted water. I add 1/2 teaspoon salt to a large pot of water. Cook the noodles for two minutes or so, drain, and toss with whatever topping you like. Sometimes I’ll simply toss them in olive oil, wedges of tomatoes from the farmers market and salt and pepper. So simple yet so tasty.