I add vinegar to many savory recipes (and sometimes to sweet ones). A flavor-brightening splash of vinegar in soup makes all the difference. The fruity pineapple vinegar that began this adventure tastes fabulous in fried rice. And if you’re Canadian like me, you will want high-quality vinegar for homemade French fries (or chips, as my mother calls them… my mother as in the mother who gave birth to and raised me, not my mother of vinegar…).

Step 1: Brew scrap vinegar, which may spawn a mother of vinegar

(Don’t worry, you can still make wine vinegar without a mother.)

This latest kitchen lab experiment began back on Memorial Day weekend at the end of May. For an appearance on The Weather Channel’s backyard cookout, I brewed tepache, a fermented Mexican drink made from pineapple peels and cores, water and sugar. The pineapple fruit itself went into Any-Fruit Crunchy Crumble (the topping calls for a bit of nutmilk pulp, if you have it, for further waste-reduction points). You can find the tepache and crumble recipes in my cookbook.

After making two batches of tepache from one set of pineapple peels and cores, I started a large batch of fabulously fruity pineapple scrap vinegar. After about a month, the scrap vinegar had grown an impressively thick, beige rubbery layer on top. The few holes you see in the pic down below resulted from her growing around pieces of pineapple peel floating near the surface of the brewing vinegar.

My fruit scrap vinegars often grow what I had thought were thin SCOBYs (symbiotic cultures of bacteria and yeast that brew kombucha). I recently read in Homebrewed Vinegar, a wonderful new book from Kirsten Shockey, that they are actually vinegar mothers, however.

Both SCOBYs and MOVs contain bacteria that secrete cellulose to form a biofilm. A MOV contains more acetic acid bacteria and less yeast than a kombucha SCOBY; a kombucha SCOBY contains quite a bit of yeast and lots of lactic acid bacteria. Given enough time, these jellyfish-like blobs can form spontaneously—a SCOBY in quality raw kombucha and a MOV in alcohol such as wine that has turned vinegary. (My pineapple scrap vinegar fermented first into alcohol, then into the vinegar which spawned my MOV.)

Step 2: Make wine vinegar with leftover wine and the MOV

Leftover wine and mother of vinegar in hand, I followed Kirsten’s “Universal Wine Vinegar” recipe in her book. Because sulfites (which this wine did contain) can prevent fermentation, the recipe calls for a small amount of 3% hydrogen peroxide to remove them. If you don’t have hydrogen peroxide, the book provides alternate instructions—simply stir the wine vigorously to mix in some air.

I poured the wine into a clean jar, stirred it up for a couple of minutes and added about 1 part water to 3 parts wine, along with the MOV. I then covered the jar with a tightly woven cloth, fastened with a rubber band. Within about three weeks, the white wine had transformed into fabulous white wine vinegar. The hot weather we’ve experienced here—and the fact that I started with an open bottle that had already begun to transform—sped up the brewing process.

I filled a bottle with the finished wine vinegar up to the top of the neck to cut the bacteria off of oxygen. This will prevent the oxygen-loving microbes from consuming my vinegar. I chose a flip-top bottle with a strong, air-tight seal rather than a jar with a metal lid that will corrode. In order to easily grab a piece of mother when I need it, that and a bit of vinegar went into a wide-mouth, flip-top jar with a rubber seal, also with as little oxygen as possible. I’ve stashed both the vinegar and mothers in a dark cupboard.

After straining my pineapple vinegar, an additional MOV developed near the surface of the liquid. I placed that in my mother jar and filled another narrow-neck bottle close to the top with the scrap pineapple vinegar to reduce the amount of oxygen in the bottle. The additional MOV layer that grew across the top of the brewing wine vinegar has also moved in with the other mothers.

If your mothers begin to overtake your kitchen, give them to friends who would like to brew vinegar. I gave one away this week when I spoke with Slow Food South Bay. Our hostess gave me a bottle or rosé that her neighbor had made and bottled with grapes he grew himself! I’ll have to make at least a bit of vinegar with some of that.

“What if I don’t have a mother of vinegar?”

You don’t need a mother to make wine vinegar but it will speed the process up. However, if you grow one, as I’ve done here, that process will slow your vinegar making down by at least a few weeks as you wait for the mother to form (if it forms at all).

If you don’t have a MOV, don’t worry! Add raw vinegar, such as Braggs, to your wine to kickstart the vinegar-brewing process. For your next batch, use either some of the raw wine vinegar you’ve just made or the MOV if your vinegar grows one. 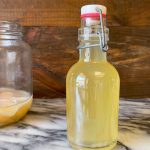 This is based on Kirsten Shockey's recipe from her fabulous new book, Homebrewed Vinegar.

I have also made delicious vinegar with leftover craft beer. Follow these same directions using beer instead of wine but omit the water. You can also remove sulfites from wine by adding a small amount of 3% hydrogen peroxide. Kirsten’s recipe calls for ½ teaspoon of this for 1 bottle (750 ml) of wine.

Find the tepache and 74 other recipes in my cookbook!

7 Replies to “How to Make Delectable Vinegar With Leftover Wine”