Perhaps your concern over plastic pollution choking our oceans inspired you to reduce your waste. Or maybe pics of glass jars of food popping up all over Instagram piqued your curiosity. Or you simply may have wanted to eliminate your exposure to harmful chemicals.

These roads all lead to the same destination—a more natural lifestyle. And I use the word natural as in “existing in nature” and not as in “all-natural ingredients” plastered on a package of hotdogs.

One question I hear regularly is “What kinds of pots and pans do you recommend?” The short answer is pretty much anything but Teflon. The long answer is, if you already have a kitchen filled with Teflon-coated pots and pans, it’s difficult to replace those overnight. But if you do want to replace them one piece at a time—or will soon buy pots and pans for the first time—I have some suggestions.

A crash course in P acronyms

You have no doubt heard of PFCs. According to the EPA website,

‘PFCs’ can be an abbreviation for either:

Perfluorinated chemicals render carpets stain resistant, mattresses more waterproof and cookware non-stick. These compounds include the toxic chemicals perfluorooctane sulfonate (PFOS), which is no longer produced in the US, and perfluorooctanoic acid (PFOA), which will soon follow suit.¹ Unfortunately, these chemicals linger in the environment long after their manufacture ceases.²

Until 2015, the manufacture of non-stick Teflon—a brand name for polytetrafluoroethylene (PTFE)—required PFOA in its production. What does Chemours Co, the Dupont spinoff that produces Teflon, now use instead? I had trouble figuring out that p-p-puzzle.

But why ditch Teflon?

1. Because the safety of PFOA, PFOS, PTFE and PFCs is confusing and who can keep all of these acronyms straight anyway?

When my daughter MK questioned the health concerns of PFCs in food packaging and non-stick coatings on her blog The Plastic-Free Chef in 2012, a representative from DuPont left a comment to clarify her supposed confusion…

To which MK responded…

To which I responded, “MK, you have arrived.”

When replacing chemicals with other chemicals, the replacements often may be no better than the originals—or even worse. Take the endocrine disruptor BPA (Bisphenol-A) for example, a chemical added to plastic to strengthen it. Many companies switched to BPS when studies linked BPA “to early puberty and a rise in breast and prostate cancers.” However, “UCLA-led research demonstrates some of the mechanisms that make BPS just as harmful as BPA. The study found that BPS speeds up embryonic development and disrupts the reproductive system in animals.”³

2. Because DuPont, a chemical company, created the stuff

According to Reuters, in 2017, DuPont and Chemours Co

agreed to pay $671 million in cash to settle thousands of lawsuits involving a leak of a toxic chemical used to make Teflon […] The companies settled about 3,550 personal injury claims arising from the leak of perfluorooctanoic acid, which is also known as PFOA or C-8, from its plant in Parkersburg, West Virginia. The leak allegedly contaminated local water supplies and has been linked to six diseases, including testicular and kidney cancers.”

If one person in your household so much as flips a pancake with a metal spatula in your non-stick pan, they may chip or scratch it. Damage the coating enough and you’ll no longer want to use it—it eventually not only loses its non-stick properties but also garnishes your food with little Teflon flakes. But don’t worry. Because PTFE is inert, it should pass right through you. Sounds appetizing.

Some pans will last you a lifetime and become heirlooms you pass down to your children. Teflon pans, not so much.

5. Because we need fat in our diets and fat tastes good

People cook with non-stick pans not only because they clean easily but also because they require little to no fat—that macronutrient demonized and banished from diets beginning in the late ‘70s, after which people grew unhealthier. According to Harvard Medical School, fat is

a major source of energy. It helps you absorb some vitamins and minerals. It’s needed to build cell membranes, the vital exterior of each cell, and the sheaths surrounding nerves. It is essential for blood clotting, muscle movement, and inflammation. For long-term health, some fats are better than others. Good fats include monounsaturated and polyunsaturated fats. Bad ones include industrial-made trans fats. Saturated fats fall somewhere in the middle.”

My three favorite kinds of pots and pans

Whether you want to replace your Teflon pots and pans or buy your first pieces, you don’t need to rush out and buy an entire set of pots and pans. Picking and choosing a piece here and there, you’ll assemble a smaller set you’ll like and use and probably save money.

I use my stainless steel saucepans to prepare pasta and rice, poach things, make soup, steam vegetables, pop popcorn (a food group for zero wasters) and more. I have All Clad pots and pans.

Disadvantages: All Clad pots and pans are expensive. My neighbor has similar Cuisinart stainless steel pots. They cost much less and have earned good reviews from America’s Test Kitchen.

To clean: For greasy or stuck on food, I sprinkle baking soda onto my pots and pans and scrub with a sponge. Baking soda works like magic on stainless steel.

I love, love, love my large, 6 3/4 quart Le Creuset Dutch oven. I use it to bake sourdough bread and to make soup, stew, chili, baked beans, refried beans, dal, sauces…all sorts of food. Dutch ovens can go from the stove top to the oven and retain their heat extremely well. After I make dinner, my pot keeps the food hot on the table while other dishes finish cooking or as everyone dilly dallies on their way to the table.

A neighbor also gave me two smaller Le Creuset pots and one pan. He disliked the heavy weight. I use the 2-quart one to make smaller amounts of food and to reheat food. Because these pots retain heat, this small also one doubles as a yogurt maker, keeping my milk warm as it cultures in a toasty spot in my kitchen. (Click here for the post on making yogurt.)

Disadvantages: If you want your dish to stop cooking immediately after you turn off the heat, enameled cast iron isn’t a good choice for that dish—it retains heat a little too well in this case. Another disadvantage is the price. My Le Creuset Dutch oven costs over $300 new. My daughter has a Cuisinart Dutch oven that cost a third of that. She likes it and uses it constantly. Enameled cast iron is also very heavy. When I describe the dishes I make in my large pot to my mother, she always says she would like one. But at 86 years old, she would not be able to lift it, empty or full.

To clean: With its near no-stick interior, enameled cast iron cleans up very easily. Usually a soapy sponge or brush will do the trick. For baked on food, let it soak overnight. Do not use steel wool to clean. Speaking of metal, don’t use metal utensils either. They will scratch the enamel.

Cast iron is practically indestructible. It can withstand the flames of a campfire. If you neglect it, you can pretty easily revive it. And it actually improves every time you use it.

Before you cook with cast iron for the first time, you have to season it. Simply clean it, coat it with oil inside and out, wipe the excess off and heat the pan in the oven at 450°F for 30 minutes. Repeat this a couple of times. This will form a hard layer on your pan. Each time you use the pan, cooking seasons it yet again. Use the pan enough and you’ll render the surface non-stick—without the nasty chemicals. And the pan will last forever. The large Dutch oven in the pic down below is about 100 years old.

I have a Lodge cast-iron skillet that I use every day. I own two All Clad stainless steel skillets and one Le Creuset skillet but I prefer my simple—and inexpensive—cast-iron skillet. A large one costs at most about $40. If your pan gets some rust on it, clean it with a potato and salt. (Read this post for more information on maintaining and reviving cast iron.)

Disadvantages: Cast iron is heavy. Until you have added a good seasoning to it, you can’t cook acidic foods in cast iron, such as tomatoes and sauces.

To clean: Despite the rumors, cast iron is easy to clean. I wipe my skillet clean with a sponge or cloth after the pan has cooled down. I rarely use soap. 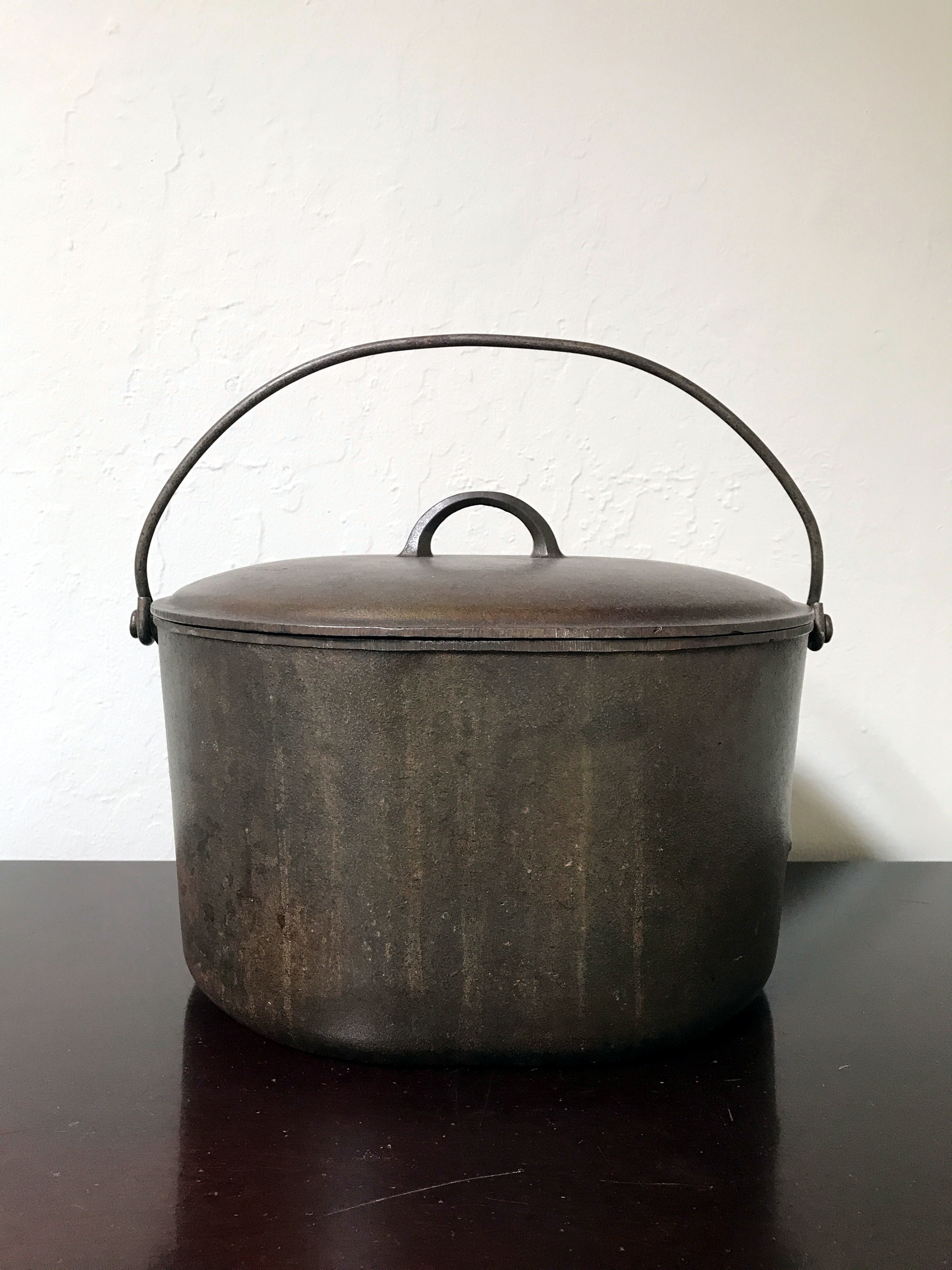 So if I had to relive my life and choose pots and pans for the first time, what would I get? I’d start with a large cast-iron skillet, a cast-iron Dutch oven (plain or enameled if you want to spring for it) and a stainless steel saucepan. I never would have bought all those Teflon-coated pans that I used to own long ago.

You can often find cast iron at thrift stores and yard sales. Many people freak out when they see a bit of rust on their cast iron and, not knowing how to clean it, ditch their pans. Grab those and ditch the Teflon.