Include random vegetables in besan chilla — savory Indian pancakes made with besan (gram flour) — for a quick, easy, satisfying snack or meal that helps you use up food you have on hand. These protein-filled pancakes are as easy and quick to make as they are delicious.

Besan chilla taste like omelets but contain no eggs. Remarkably, these rich pancakes contain very little (but taste so good!): besan, salt, vegetables and water. Besan—also known as gram flour (not graham flour!)—is made of finely ground split roasted chickpeas and differs from chickpea flour, which is made of ground whole chickpeas. (If you use chickpea flour for these, add the water gradually rather than all at once to avoid lumps.)

My daughter Charlotte bought besan before she left for school in the fall and it had sat in the cupboard ever since. What started as a desire to find a use for all of it has turned into a mild obsession with making and eating besan chilla coupled with problems keeping enough gram flour on hand.

I added scallions to the pancakes pictured in this post because mine needed harvesting and also because, well, savory pancakes and scallions. I regrew the onions from white hairy ends that I planted in a pot outside near the end of 2020. They grow. I cut. They regrow. (Go here for more on regrowing herbs and scallions.)

These taste fabulous with chopped tomatoes also. Shallots and fresh cilantro are other great add-ins. Chopped fermented jalapeños as some heat and flavor (or use fresh!). In the summer, grate zucchini. In fall, add shredded parsnips. I didn’t add spices to the chilla in this post but cumin, turmeric and cayenne pepper are all good contenders or, or, or… Experiment and enjoy.

I’ve been devouring these with a quick cilantro chutney, which uses up any amount of cilantro you have on hand—both leaves and stems. It goes perfectly with besan chilla and also ensures we eat all the cilantro we buy. Herbs have to be one of the most wasted food items. We often need just a small amount but must buy an entire bunch, the bulk of which can head south quickly.

For the chutney, in a food processor, whir up cilantro along with a few cloves of garlic, a spoonful of chopped fresh or fermented jalapeños or serranos and a bit of lemon or lime juice. Once the cilantro and garlic are finely minced, with the machine running, drizzle in olive oil slowly and continue to process until the chutney has reached your desired consistency. Store leftovers in a jar in the refrigerator for at least a week or freeze them for up to six months. 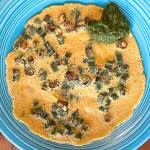 Learn more about my book here. Thank you to everyone who has purchased it! Will you please write a review on Amazon? (Goodreads also works.) Thank you for your support!