This easy-to-make mouthwash passes the I-avoid-putting-anything-down-the-drain-that-I-won’t-eat test, which I mentioned in my recent TMI post. You might actually want to drink this, since it contains only vodka, spices and water. With just these few edible ingredients, you can make a large amount of inexpensive mouthwash that works really well to freshen your breath.

Original Listerine, on the other hand, contains:

After you’ve polluted your mouth with this chemical concoction, you then have to deal with the disposal of the plastic pollution that comes with it—the bottle and lid. Yes, you can recycle the bottle (but not the lid), however, plastic is downcycled, meaning it is recycled once or twice only before it ends up in—yes—landfill.

Cut plastic at its source and make your own mouthwash for pennies, sans the nasty chemicals. I am able to buy spices in bulk and the vodka comes in a glass bottle I can reuse for my scrap vinegar, kombucha, ginger beer and so on. Or I can recycle it. Glass is recycled where I live.

This is one of those non-recipe recipes. Essentially, you make a tincture—alcohol infused with a medicinal substance. You can substitute the spices, although I would still include the cinnamon and cloves. Not only do those both have antibacterial properties, they also make this smell so good and taste more palatable (I’m not a big vodka fan).

Other spice options include rosemary or sage, also with antibacterial properties. Someone on my Facebook page suggested including neem tree in any form. Someone else on Instagram suggested adding myrrh and said it’s good for the gums. I’m not sure where to buy neem tree or myrrh but Google knows.

To dilute or not to dilute?

When I posted a picture of this on Instagram, a couple of people asked if they could dilute the entire tincture with water in advance and skip the step of diluting the mouthwash before every use. I’m not sure if mold will grow in a diluted form of this or not, so I’m giving it a try with just a small amount of my finished tincture. In the picture below, I combined about 1 part tincture to 10 parts water. I will keep you posted.

07/09/17 update: The temptation to apply this directly from the diluted jar and not pour in a cup was too great and so I contaminated the mouthwash. A bit of mold formed, I’m embarrassed to admit (at least I’m honest). If you dilute it, be sure to keep a separate cup in the bathroom for use. I prefer to store it at full strength. It takes up less space when I bring it to work. 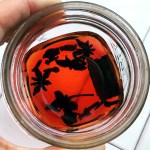 Make this concentrated mouthwash with ingredients in the pantry. After it steeps for a month, to use, dilute 1/4 teaspoon with 2 tablespoons of water.
Prep Time5 mins
Resting time30 d
Total Time30 d 5 mins
Cost: $3.50