Last week during spring break, my daughters, a friend and I headed down to the Monterey Bay Aquarium. My journey to plastic-free living, followed by zero-waste living (basically the same thing) began with my concern over the plastic pollution choking our oceans and its inhabitants. I decided I had to get plastic out of my life. It was easier than I think most people realize.

Sadly, my camera began to act possessed the day we hit the aquarium, but between my daughter MK and me, we managed to take some good shots. I hope you like jellyfish…

One section of the aquarium focuses on the plastic pollution problem in the oceans, with artwork made from plastic trash. Artist Chris Jordan created the above Gyre. The plaque on the right to it reads:

If you look closely at this photo collage, you’ll find toothbrushes, buttons, combs and other plastic items. Inspired by the Great Pacific Garbage Patch and Hokusai’s woodcut The Great Wave off Kanagawa, Jordan’s image uses 2.4 million pieces of plastic—the number of pounds of plastic estimated to enter the world’s oceans every hour. 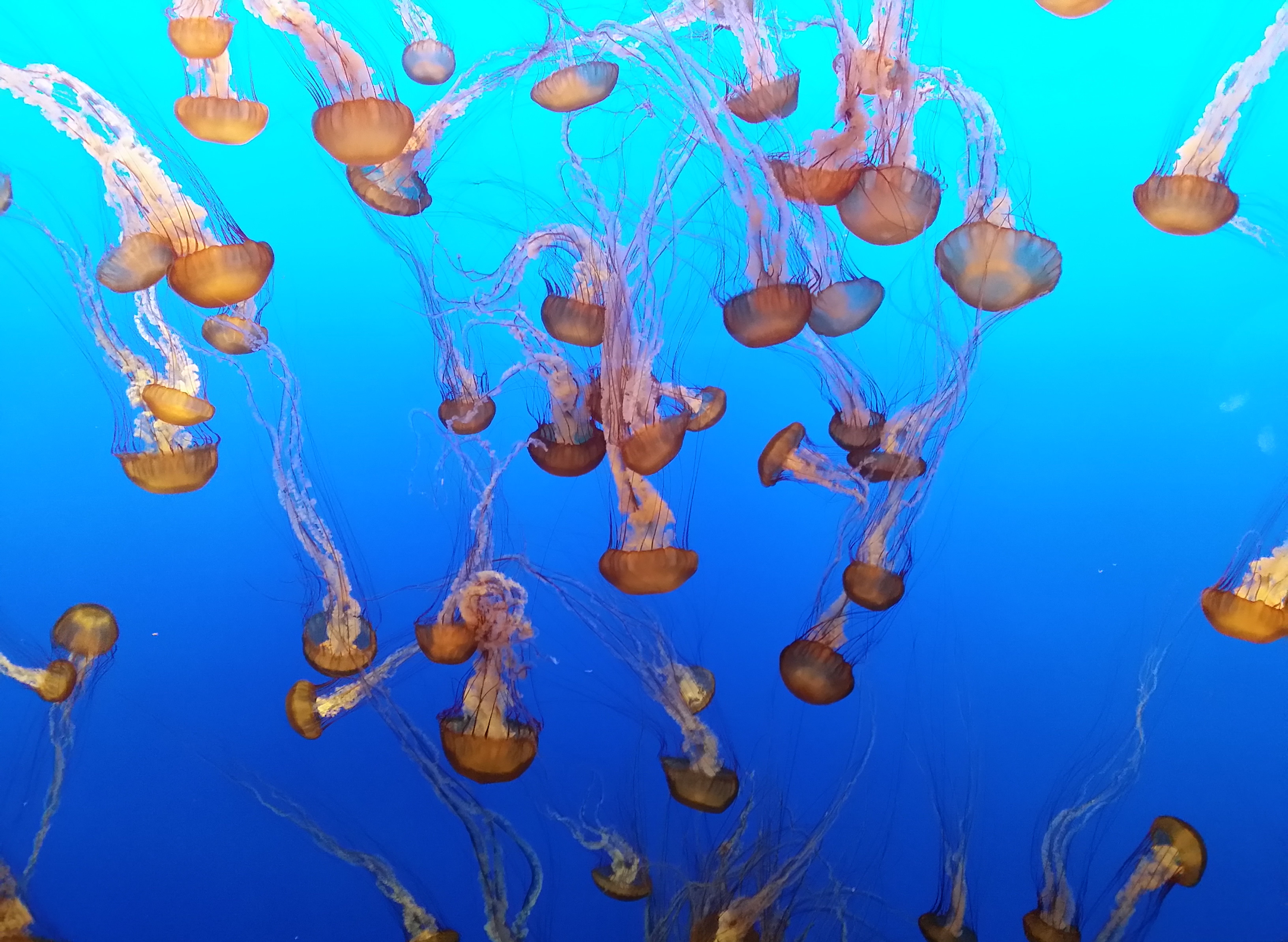 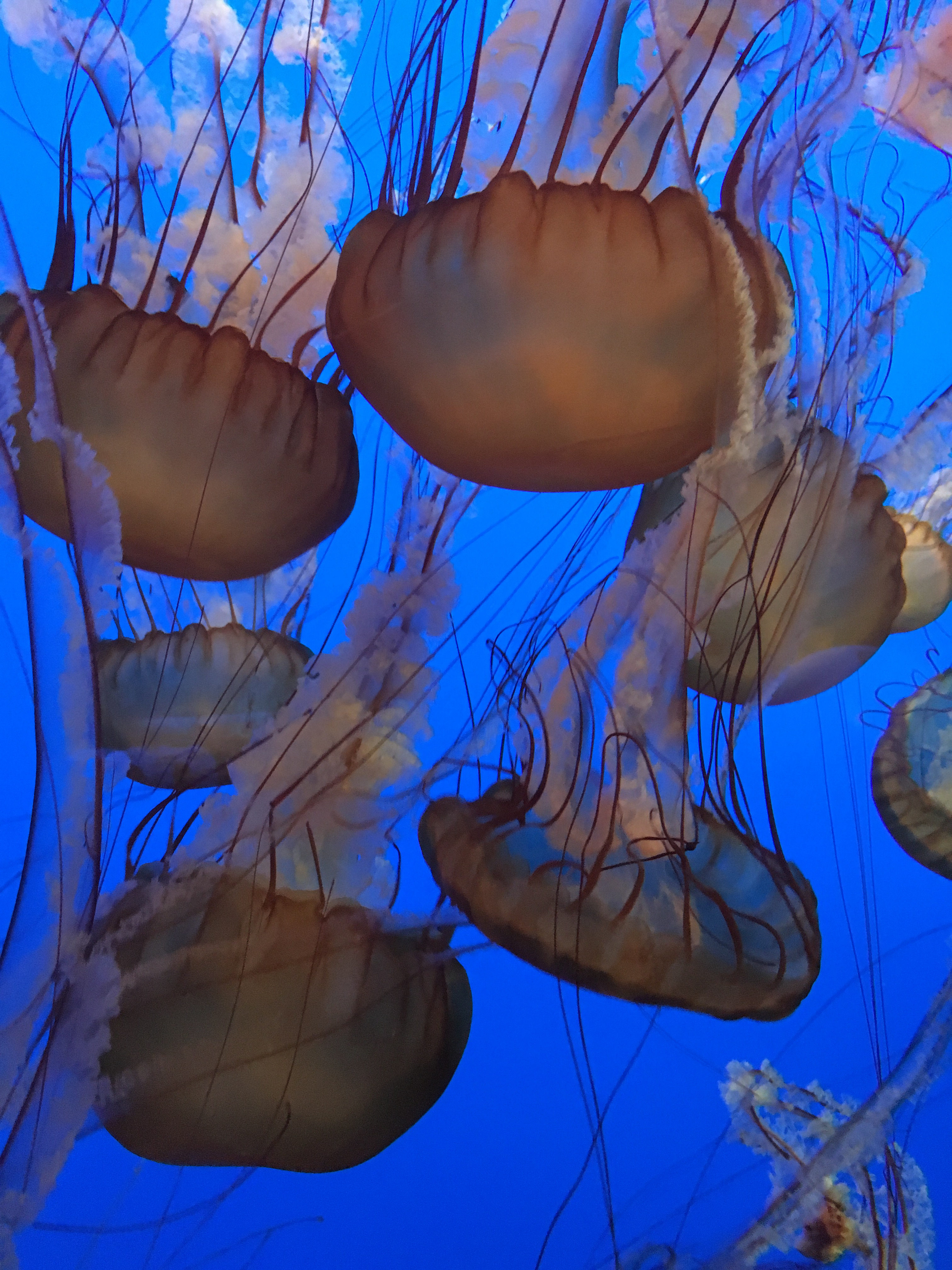 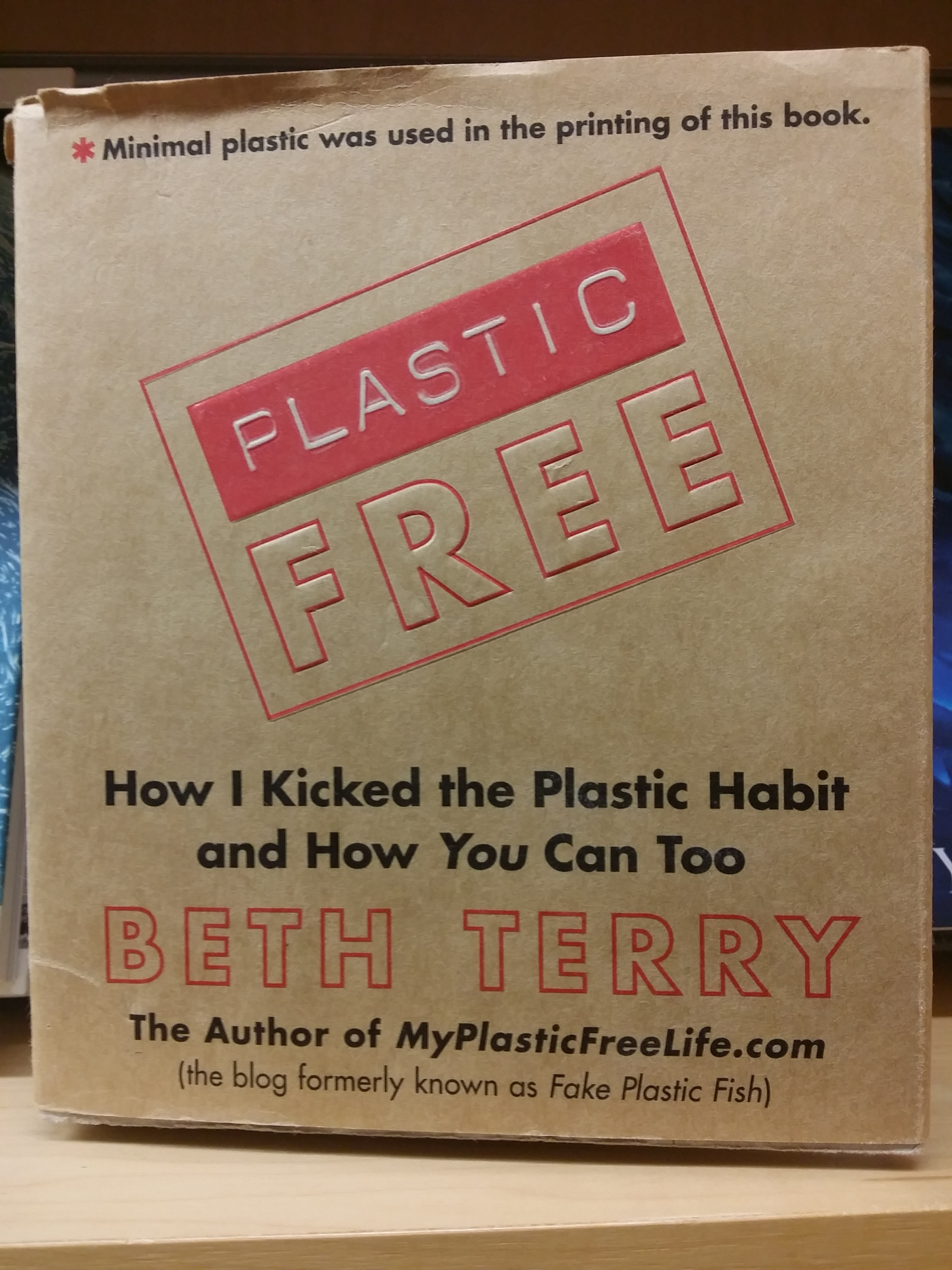 At the gift shop, we spied Beth Terry’s book. We have this at home and love both it and Beth’s blog. MK has a blurb in there on how to make almond milk.

We didn’t buy anything at the gift shop. If you want to help the oceans, consume less stuff and when you do buy, buy second hand. We stumbled upon thrift shop heaven just up the street from the aquarium. 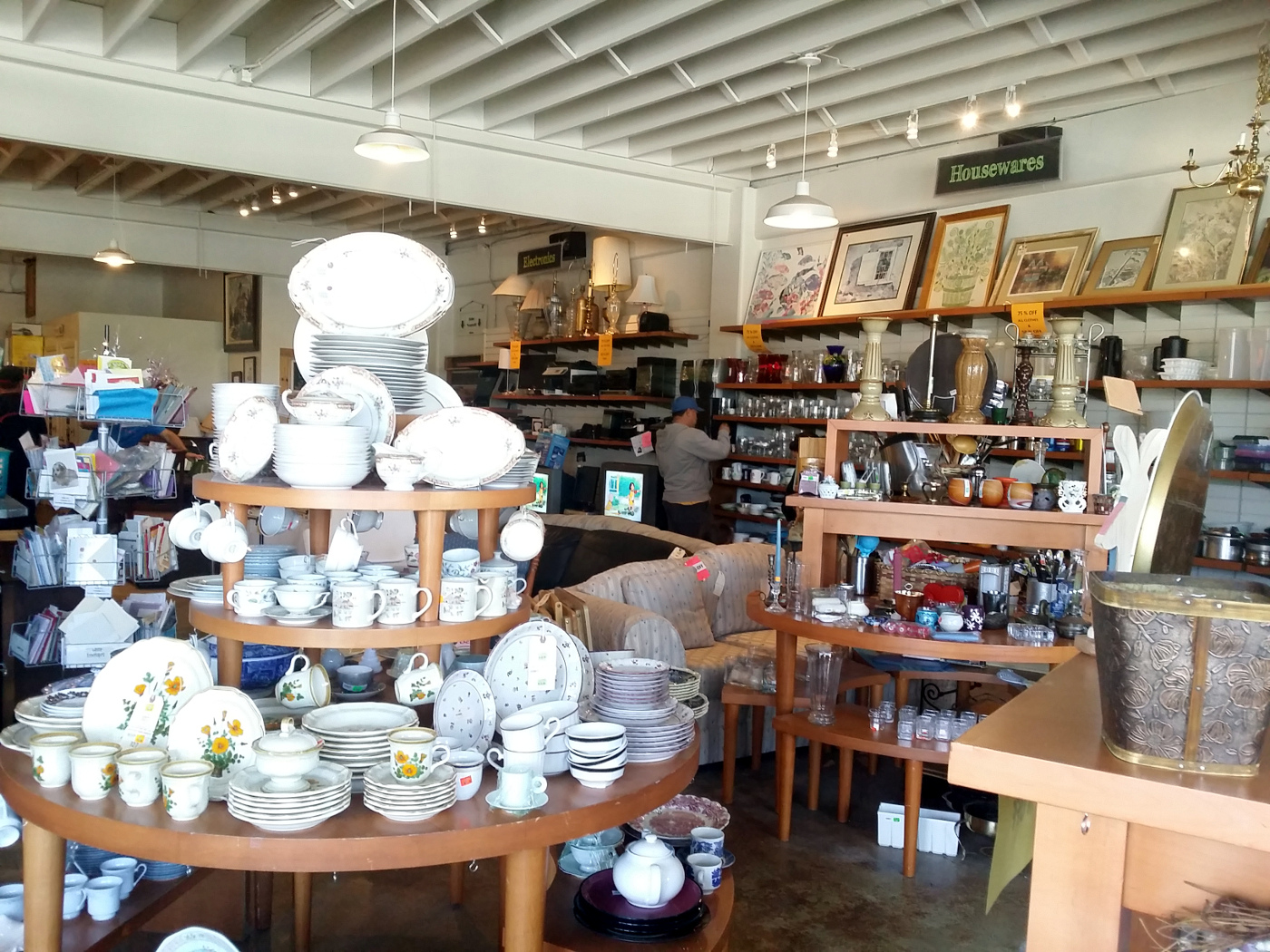 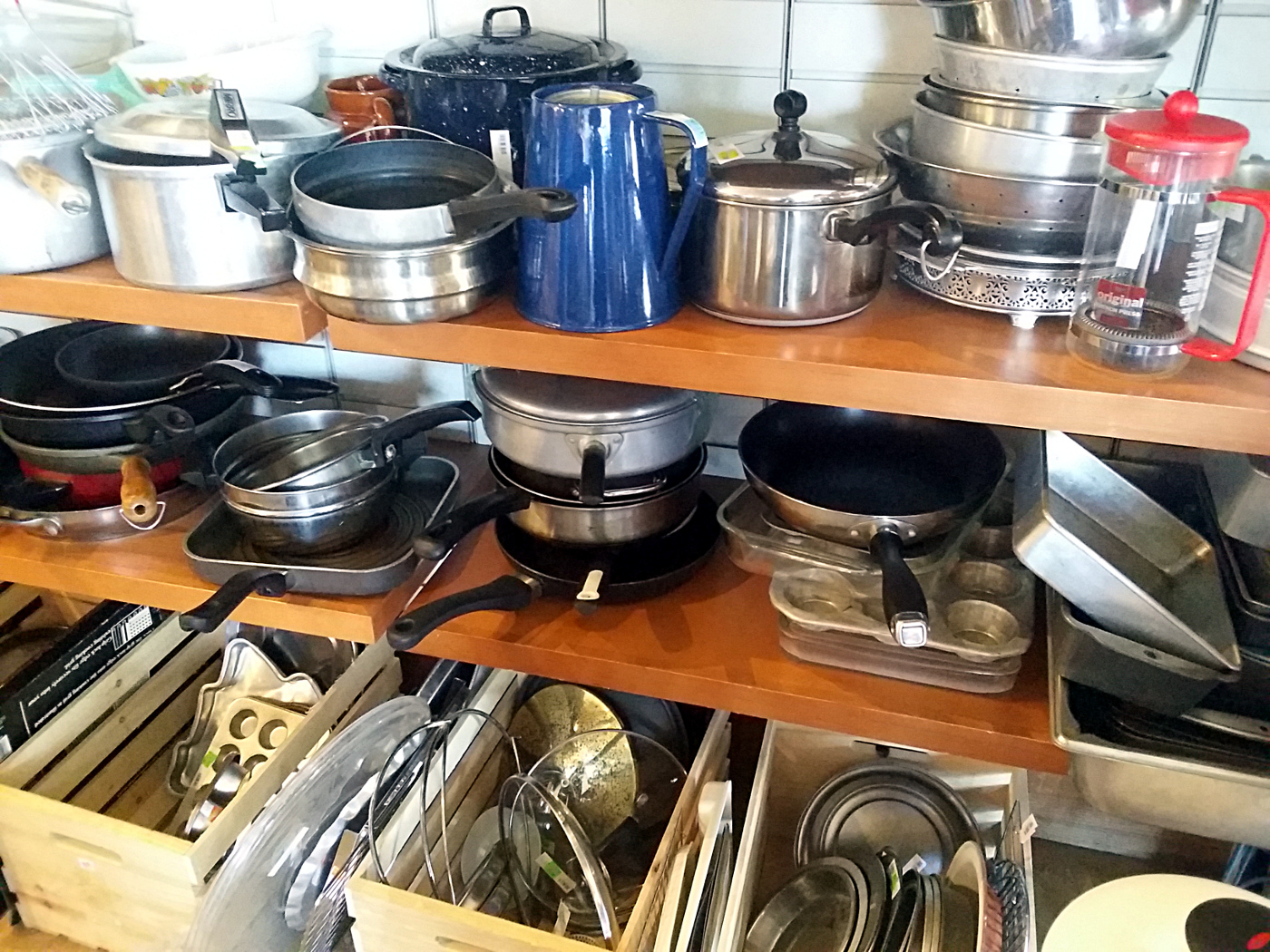 Clothes were 75 percent off! My daughters and their friend bought about 15 items—t-shirts; shorts; hoodies; silk (!) pants; a few decks of playing cards, including one dating to World War II—and spent less than $15 combined. After playing some scales on a $250 piano, I felt physically ill about how much I paid for my new piano in 2000. Oh well, I was more of a consumer back then. I consume much less today, spend less and am so much happier.

I’ll leave you with a short video of Monterey Bay.