My youngest daughter, who asked I use a fake name for her in this post—let’s call her C—repeatedly asked me for a hamster this summer.

C: Can we get a hamster?

Me: Bootsy will eat it.

C: I’ll keep it in my room with the door shut.

C: All of a mother’s problems disappear when she gives her child a hamster.

C: Did you look at the brochure I made about why you should get me a hamster?

Me: No. I mean yes I did but no hamster.

C: Can we get a hamster?

Me: I don’t like having hamsters as pets. They don’t live long. They can’t let you know when they’re hungry or thirsty, like a cat or dog can. Pets are a big responsibility. We have to find a cat sitter for Bootsy every time we go away. We don’t have any of the hamster stuff. Hamsters cost money. They poop constantly. They smell.

C: He can be a zero-waste hamster.

We found Frank on craigslist. C changed his original name—Elon Mouse, which I adored—to Frank. He came with a free cage, water bottle and some cage accoutrements, like a hollow tree stump he likes to curl up under. But his cage offered little room for him to run around.

Every time we entered C’s room—and he was awake—Frank would climb up the (short) wall of the cage and look up at us, as if pleading to be let out. We would open the cage door he’d run around a bit on the carpet but I felt bad putting him back in. So I started looking on craigslist for a bigger cage. I hadn’t been having much luck and last week wondered if I should just cave in and pay a pile of money for a new cage at the pet store. But then the perfect new home appeared…

The woman who sold me this handmade cage donated the asking price—$40—to Rattie Ratz, a not-for-profit rat rescue here in the Bay Area. So not only did I avoid buying a new junky piece of landfill in transition that would have cost much more, my money also went to a good cause. I can’t believe my luck!

When we moved Frank to his cage Sunday night, he ran all around and checked things out. He seemed very excited. He gets more exercise now—his wheel fits in the cage and he likes to run up and down the staircase. And he loves to sleep under the wooden shelf below the stairs.

For bedding we have been using shredded paper, which I compost in my yard after I change the cage. Mr. Sierra Club says you can safely compost shredded paper. You may hear conflicting reports of what can and can’t go in a compost heap. I throw all sorts of stuff on mine. (Here’s a post about how I compost.) 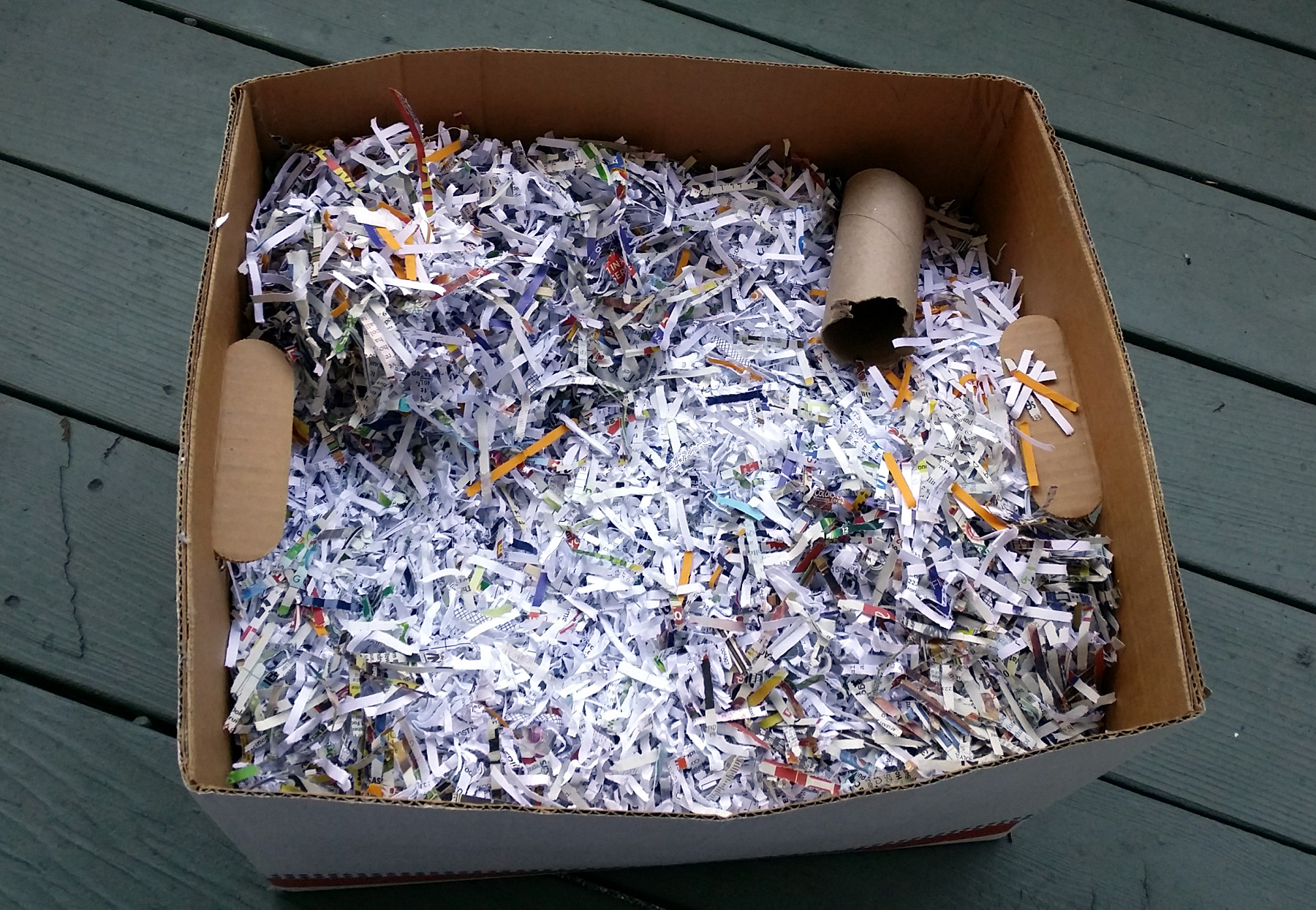 I have started collecting brown paper bags (we have lots in our recycling bins) and want to try those next. Paper without ink is probably better for Frank. And the thicker brown paper might be more absorbent.

When I said yes to the hamster, C and her sister MK immediately researched hamster food online. Hamsters eat small bits of vegetables or fruit a few times a week. I can easily find unpackaged produce, so I checked that zero-waste box on the priorities list.

When I chop vegetables, I now reserve a few bits for Frank. He ate some of the scraps you see in the little pile at the bottom of the pic below. He gobbled up the zucchini.

I can buy dry food—what hamsters mostly eat—in bulk where I live. One recipe I found called for equal parts popcorn kernels, lentils, split green peas, pumpkin seeds, sunflower seeds, flax seed and millet. So I decided to make that. I had also read that hamsters like sesame seeds and because we have a lifetime supply of them (MK went crazy one day and bought tons for fermented porridge), I added those to the mix too. 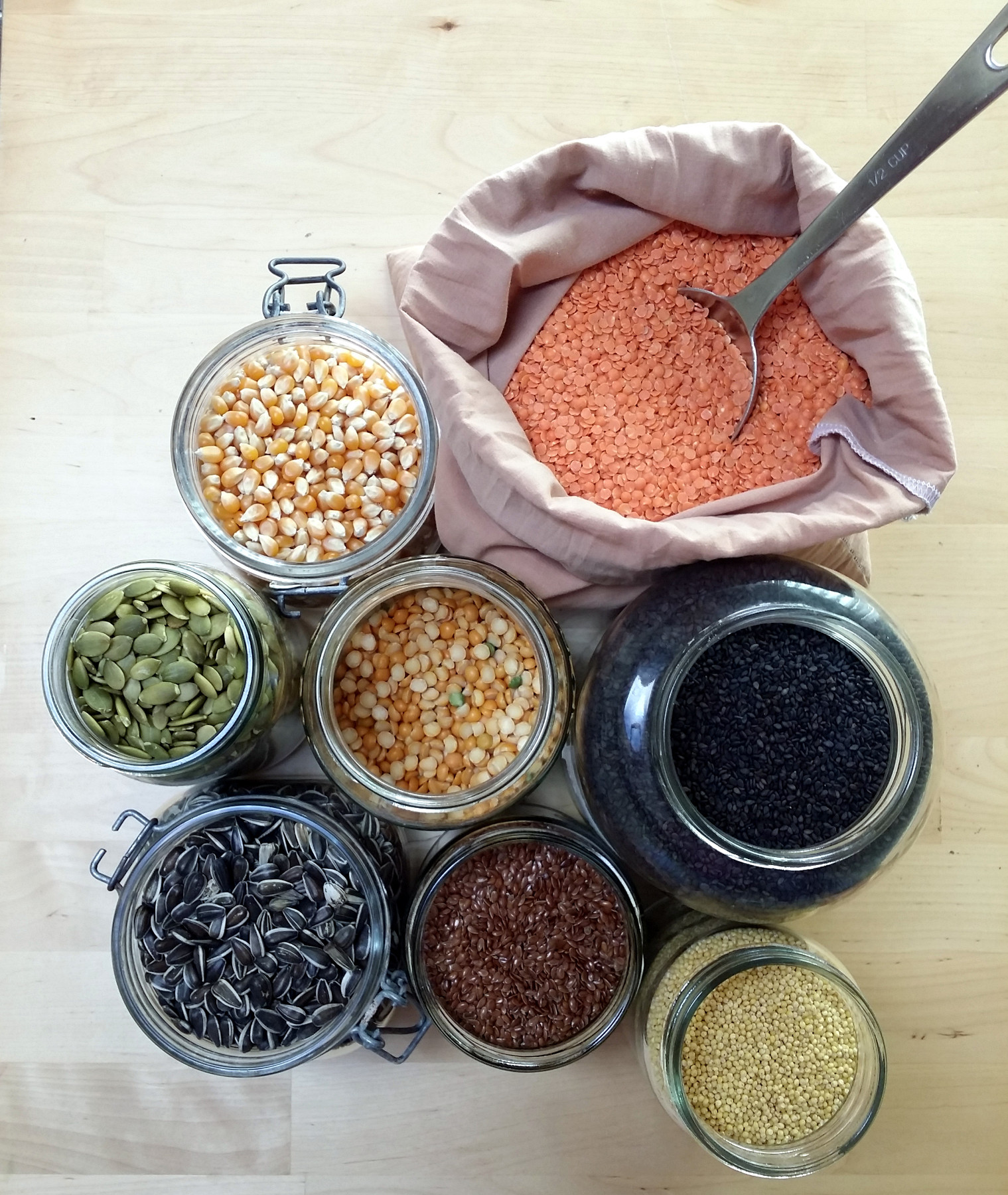 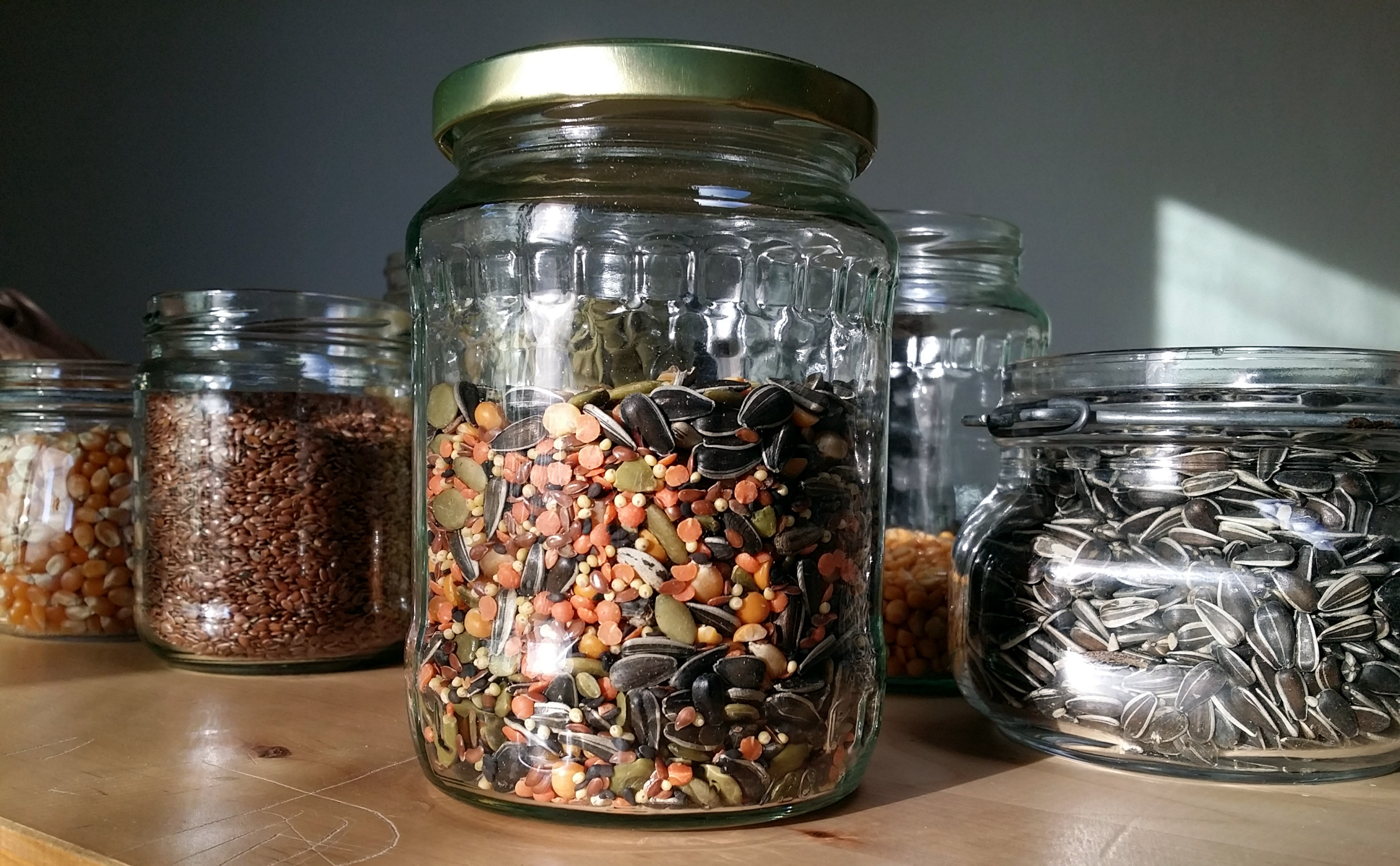 But will he eat it?

Frank is camera-shy. And he can’t sit still. I had SO MUCH trouble getting a decent shot of him. I have no idea how the creators of Hammy Hamster pulled off filming rodents.

When I set out his dinner, Frank crawled out of his nest under the stairs and chowed down for a while. He liked the sunflower seeds best and quickly stuffed all of them into his cheeks. After eating, he retired to his little wooden house to digest his meal. 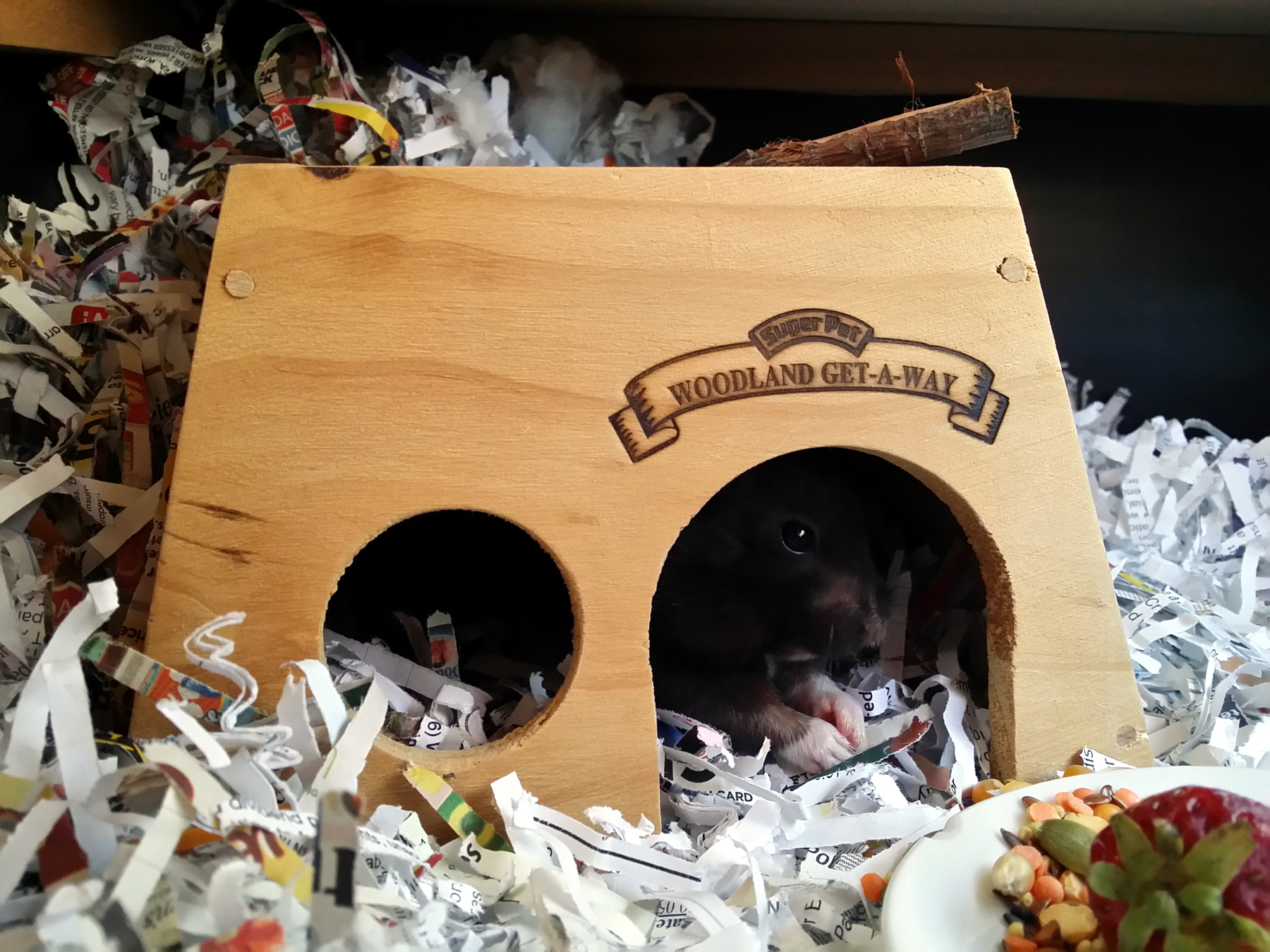 The lentils weren’t a big hit. I saw him spit one out across his plate. I wish I had caught a shot of that. So let’s see what he left behind… 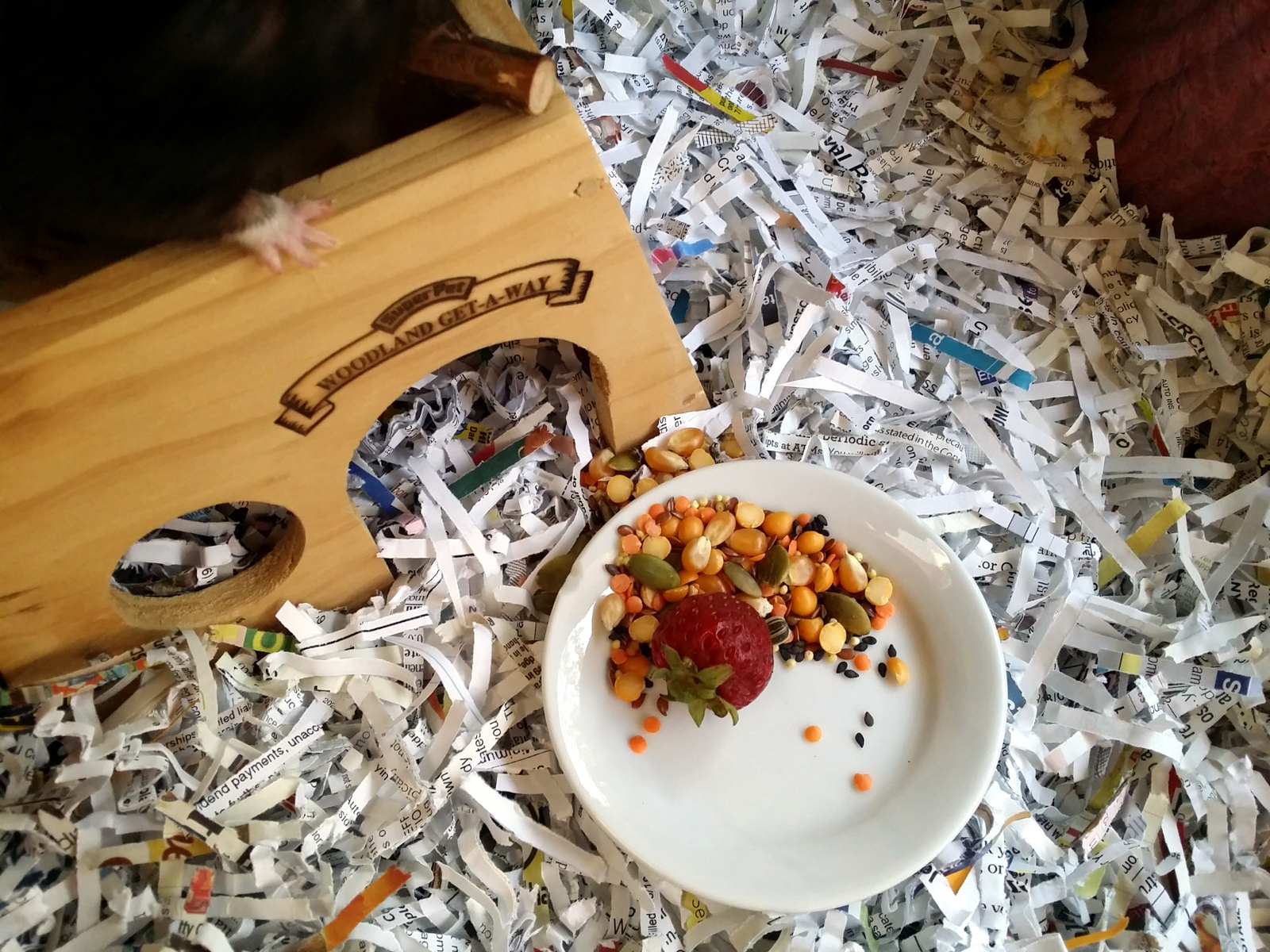 The lentils, yellow split peas and popcorn weren’t his favorites. He ate lots of pumpkin seeds. He missed just one sunflower seed. I’ll check again in the morning.

So, C certainly knows how to win me over—just dangle the zero-waste carrot.

And keep the little thug below away from Frank.