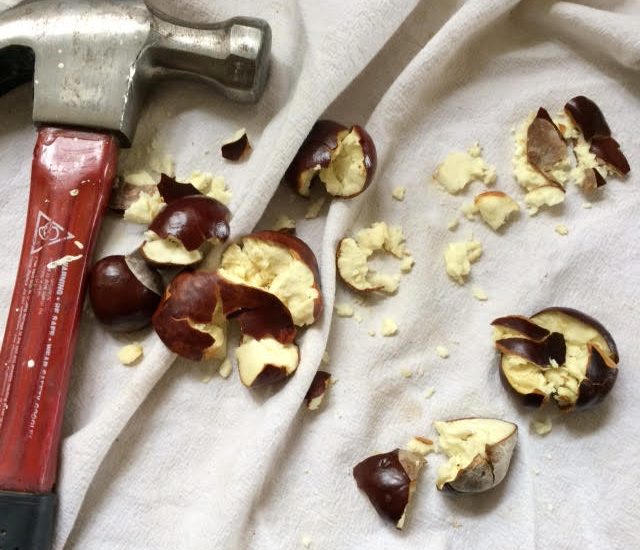 While scrolling through Instragram recently, I saw a pic of homemade laundry soap made from horse chestnuts at @less_is_more_pdx. I was amazed! I immediately messaged the woman behind the IG account—Angela Zahas—and asked her if she would like to write a guest blog post about her homemade soap.

Horse chestnut trees grow in temperate areas of North America, Europe and Asia. Early fall is the time to forage for chestnuts—National Chestnut Week in the US runs October 9th–15th (yes, that’s a thing).

We ride past four horse chestnut trees on our bike ride to our 2-year old and 4-year old’s school each day—crushing the nuts under our bike trailer wheels and enjoying the thrill of watching a seed pod fall and crack on the sidewalk, littering the road and walk ways. And they really do make a mess. I know horse chestnuts are not edible and I was curious if there was any practical use for them. Imagine my excitement in seeing a post a few weeks later on @_wastelandrebel_’s Instagram about making chestnut soap. Was it possible to actually make soap from chestnuts? And would it actually clean clothes? I wanted to find out.

The next day, with a bucket in the back of our bike trailer, I set out to gather the abandoned chestnuts.

With the help (but mostly distraction) of the kids, we gathered about 10 pounds and took them home.

Unsure of the best way to crack and grate the nuts into smaller pieces, I gathered a few tools; a kitchen knife, a cutting board, a hammer, a tea towel, a blender (not a high-speed model), and a few measuring cups.

After a bit of trial and error, I found the best method involved placing a nut under a tea towel and hitting it hard with a hammer to crush it and break it into a few smaller pieces. After a few crushes, I found my rhythm and breaking them one-by-one did not take long.

Once I had a couple handfuls of crushed nuts (about 8–10), I put them in my blender and pulsed until they were grated into small pieces, like a pulp.

I took the small bits of chestnuts (about 1/2 cup), dumped them into a Pyrex measuring cup and added 1 cup of hot water.

I let the mixture steep for about 30 minutes. Steeping time will depend on the size of the pieces. Chestnuts just cut into quarters will need to steep overnight, while the pulverized chestnut pulp need only steep 15–30 minutes to release the saponins.

Next, I strained the mixture. It will be just like milk, as thick as whole milk or cream, with a cloudy, yellow color. About 1/4 to 1/3 cup is all that is needed per wash. The liquid detergent can be kept in the fridge for a week.

Chestnuts can be pulverized using the methods above, dried (either in oven on trays over a low temp or in sun) and stored in jars for future use. When ready to make a new batch, take 1/2 cup of dried horse chestnut pulp, soak in 1 cup of boiling water, steep, strain, and use for your next load of laundry.

Alternately, I read that one could put the grated chestnuts or quartered chestnuts in a mesh bag and place directly into the washing-machine, but I haven’t tried that method. Also, some folks peel the skin off the chestnuts for fear the dark skin will stain light-colored clothing. I have not found this to be the case, and my white clothes have not become stained or discolored by the soap.

A word of caution, this soap is gentle and great for delicates and for everyday washing. However, it is not a power stain-fighter. If clothing has a grease stain or another tough stain, pre-treat before washing. Chestnut soap is not equipped to tackle stains that need some extra attention.

Both my husband and I have used the soap on our clothing. The clothes come out smelling fresh and fragrance-free. On our next batch, I will likely add a few drops of essential oils. I am still in awe of the fact that I made soap from a nut that falls in abundance in my neighborhood. It is truly a gift from mother nature.

Angela Zahas lives in Portland, Oregon with her two kids (2 & 4) and husband. She is a mostly zero-waste, bike-commuting, working mom who loves a simple, plant-based recipe, a great doughnut, a funny movie, and a good cry. A native of the Pacific Northwest, she loves a refreshing walk in any weather. Follow her on Instagram @less_is_more_pdx.

47 Replies to “How to Make Free Chestnut Laundry Soap”