Sometimes checking Twitter compulsively pays off. Last Friday, while checking my feed yet again, I noticed a tweet from Michael Pollan with information on a limited number of tickets for the last Edible Education 101 lecture at UC Berkeley, organized by The Edible Schoolyard Project. Michael Pollan and Mark Bittman would discuss the future of the food movement. My daughter MK and I each snagged a ticket before they disappeared in mere minutes. The event was this past Monday night.

I’ll present you with just some highlights. Writing with pencil and paper and in the small, quiet lecture hall of about 150 people, I think my scratching annoyed the woman sitting next to me—she kept looking down at my notebook—so I didn’t write constantly, which I should have because the lecture was brilliant. You can watch it online here.

Before introducing Michael Pollan and Mark Bittman, the Master of Ceremonies set the tone, saying:

The crisis in the food system in a crisis in culture.

Food connects everything in our culture—labor, the soil, education, health, growing, eating, family. If we improve one area, we improve the others. If we abuse one, it affects the others. A food system that relies on poisoning the soil relies on slave labor and vice versa. Not that we actually have an official food system, as I learned Monday. That relatively new term suggests that this country has created an organized network to provide its citizens food. It hasn’t.

Michael Pollan asked us how we would feel if McDonald’s went all organic, if Wal-Mart carried all pastured meat or Coca-Cola grew organic corn for its high-fructose corn syrup. Imagine fields and fields of organic corn not sprayed with atrazine, protecting the farmers, improving the soil. Several people giggled or moaned.

He went on to say that “The people drawn to this movement are looking for something more profound” and that we’re interested in the big picture—the social aspects of food, not just eliminating the pesticides. Although Whole Foods and Chipotle have resulted in some benefits, we have to do better.

So what issues can activists address and win? McDonald’s announced that it will no longer source antibiotic-treated chicken. Michael Pollan called that a victory. Will I eat at McDonalds? Of course not but I welcome fewer antibiotics in our food system.

Why should we worry about antibiotics? Every year, 23000 Americans die from antibiotic-resistant bacterial infections. Mark Bittman approached the White House about this. “Not to worry,” he was told. Homeland Security is on it, creating stronger antibiotics to tackle the superbugs created by, well, antiobiotics. (Do you feel better?)

Here’s something else I hadn’t thought about before Monday night: When the food movement tackles antibiotic use in industrial agriculture, it takes on not one, but two giants: Big Ag and Big Pharma. Two powerful forces. (But so are Pollan and Bittman!) Is that fight “winable”?

Pollan said the food movement needs to find more powerful allies, such as the insurance industry. With Obamacare in place and insurance companies unable to dump clients with pre-existing conditions like Type II Diabetes, the industry has a vested interest in lowering the rates of this once-rare disease. That will come by encouraging those it covers to eat healthier. In other words, the insurance industry needs to take on Big Food.

Where is the food movement now?

Michael Pollan described the food movement as very new, very young and barely existent, and weak but with potential. Still in its early stages and with disparate parts, some of which fight each other (eg., vegans versus farmers pasturing cows), the movement does not have the giant numbers or organizational structure of the environmental movement. Regardless of all of that, he said the corporations are terrified.

He and Mark Bittman gave a powerful example. When Florida tomato pickers couldn’t get anywhere with the growers to improve working conditions—some going as far as staging a hunger strike—they went directly to the brands. They shamed the big corporate buyers—Burger King, McDonald’s, Walmart—and worked with them to finally strike an agreement last year with the growers to improve working conditions and wages. Lately, we’ve seen fast food workers using these same tactics to some success.

Pollan said corporations cherish their brands and will do just about anything to protect those brands. We need to exploit this politically.

If you read my blog at all or sat in that lecture hall Monday night, you already have an interest in, and know about, food issues. But as Michael Pollan said, food issues come as news for many people. Many still don’t realize that most of the “food-like substances” in the grocery store merely pose as food, and that they shouldn’t eat these processed products.

At the end of the lecture, Mark Bittman offered a no-nonsense two-step approach to food:

Michael Pollan asked us to contemplate this: “How can we make food just and clean and fair?”

After the lecture, I met Michael Pollan and he signed my copy of Cooked: A Natural History of Transformation. His books changed my life! 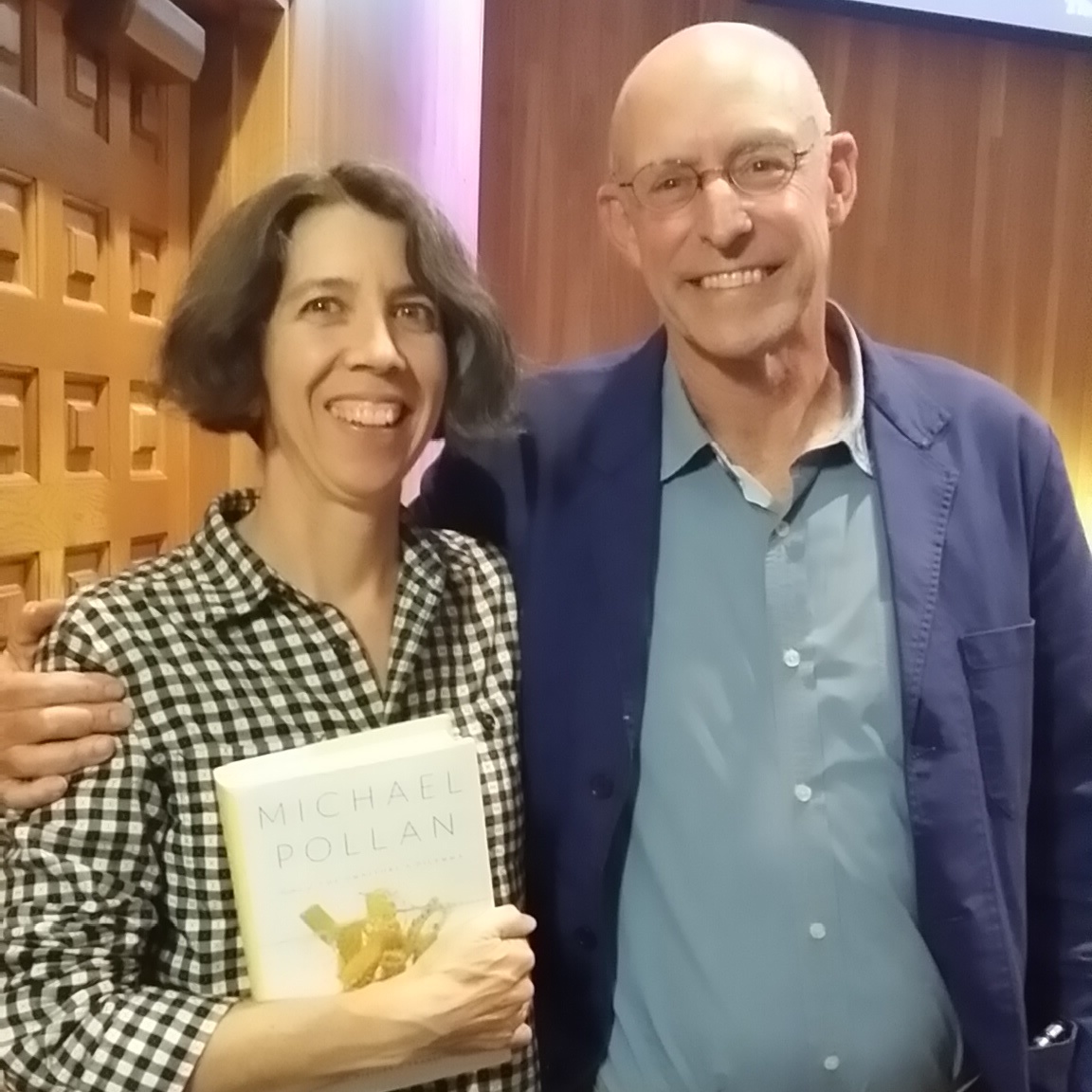 24 Replies to “The Future of the Food Movement”