Finally, I have roped a family member into writing a guest post. My sister Michelle and her husband Glenn bought a 120-acre farm in Ontario in 2011, northeast of Toronto. They have not had the best luck with their chickens. 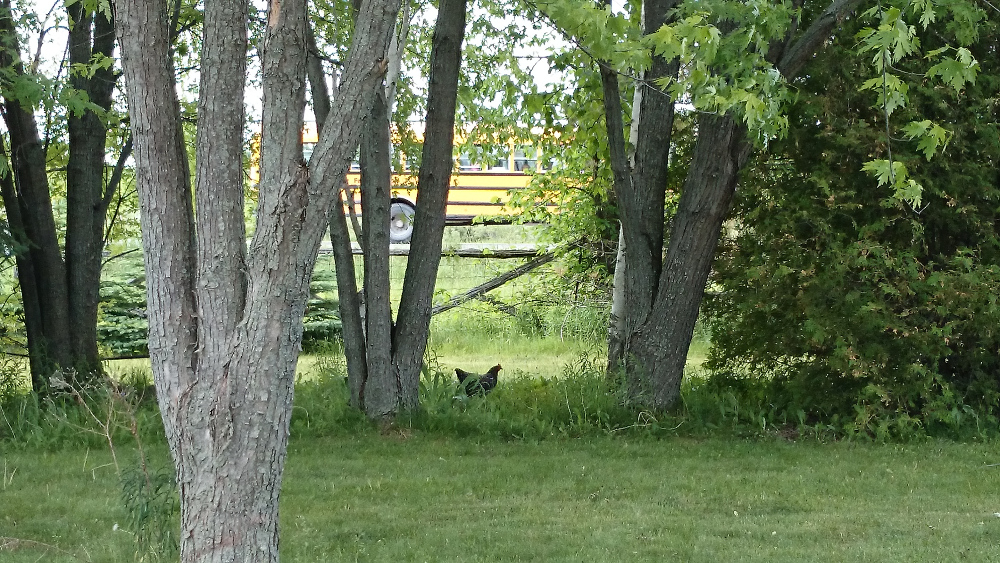 The Chicken came into our lives almost two years ago now. Looking back, I would be unable to pick her out in a lineup. She was one day old and arrived with nine siblings, all born the same day. They were all yellow and grey fluffballs, bigger than a golf ball but smaller than a baseball—about the size of an egg, now that I think of it. The kids were fascinated.

They quickly grew wings and the fluff turned into feathers. We had been assured they were all females. As the weeks and then months passed, the half of them with the best combs got wickedly sharp spurs on their back legs. Once they started to crow, and fight, they…er…ok, we ate them. Their sisters got along well though. They continued to roam the fields together, hunting for bugs.

Our dog, a sweet and lively Lab-Collie mix, watched the chickens but also (rarely) chased them. They didn’t like that and would hide under the cedars and spruces. We scolded Lassie when we caught her harassing them, and after a while she gave them a wide berth.

Their first winter was hard. By then they were laying gorgeous big eggs with beautiful firm bright yolks. Glenn hung a heater from the ceiling of their coop, where they were safe from the coyotes. Every morning he brought them water and grain, and tucked them in every night.

After six months of snow, spring came. The chickens were ecstatic. They were back to foraging for bugs. They dug Chicken Holes in the gravel at the edge of the driveway, where they would sit together after their dust baths.

Then one disappeared. We found a few bones weeks later, in a desolate rocky field near a small juniper bush. That left four chickens. They seemed unruffled (sic) and continued to roam the fields.

Weeks later, I arrived home and my outraged husband Glenn told me that Lassie had eaten a chicken. There was an explosion of feathers in the driveway—and a missing bird. We scolded Lassie until she knew she was in trouble for something to do with the chickens. Soon after, another chicken disappeared. Even I could no longer defend Lassie.

A week or two later, I returned home from work late—close to dusk. Crows were hovering near the creek, making a huge racket. I looked to see what the fuss was all about and saw a lushly beautiful red fox coming toward me—well, strictly speaking, toward the two chickens behind me. With much difficulty, I shooed the fox off and ran inside to call Glenn. He couldn’t catch the fox. That night, The Chicken became the last of her kind.

The Chicken would not come out of her coop. Days went by. Glenn kept feeding her and would have to take her out of the coop, but she never strayed far. She grieved for a month, stopped laying eggs— she was just existing.

Then The Chicken found The Gardens. They were beautiful—patches of soft loamy fresh dirt with tasty seeds to scratch up and eat. I’m sure she thought she had entered Paradise. Only one sunflower seed survived. I was luckier with the peas—she only got about a quarter of those. She had a surprising taste for the little red onions. And the strawberries—!!

She does lay fabulous eggs though.

The Chicken has been scarred by the loss of her family. She doesn’t go as far from the house anymore. She likes to be around Lassie, which makes Lassie uneasy (see previous notes re scolding). She waits by the French doors in the morning till we give her a treat. But I think her ordeal has made her a stronger chicken. She’s a plucky one.

9 Replies to “Biography of a Canadian Chicken”