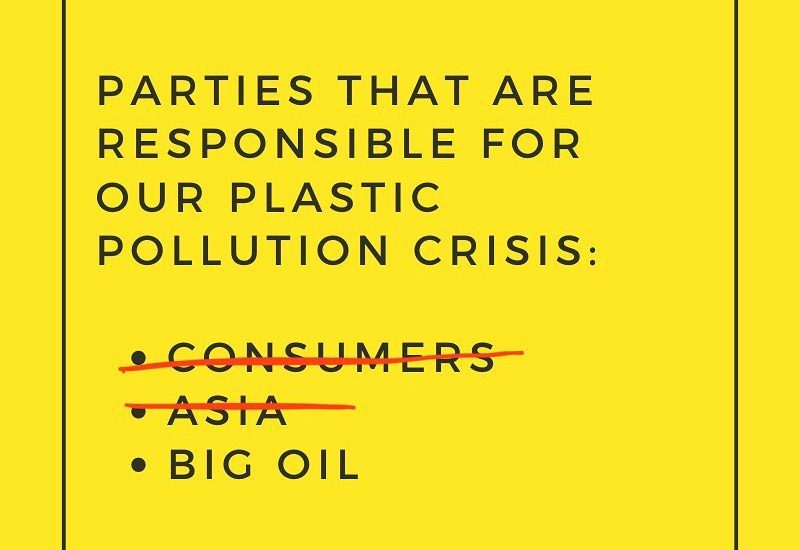 This past weekend, I hosted a virtual screening of the documentary, The Story of Plastic. Over 800 people watched the film at home. On Monday, about 150 of us reconvened for a panel discussion and Q&A over Zoom (thank you Zoom for the upgrade to accommodate all the attendees!). Zero-waste activists Manju Kumar, an urban organic farmer and the CEO of Brush With Bamboo, and Jonathan Levy, a zero waste project manager at Go2Zero Strategies, joined us and provided their insight.

I encourage everyone to see this film. You can look for a screening through The Story of Plastic website. Below are just some of the takeaways:

Recycling is a myth

Consumers did not create this problem

Industry has pushed the onus of cleanup of their products onto us, the consumer, by leading us to believe that poor waste management causes plastic pollution. In reality, plastic pollution is a production management issue—corporations produce too much of it. To make matters worse, our tax dollars fund recycling programs that can’t and don’t work. And while asking consumers to change their behavior, corporations do nothing to change theirs (other than behave worse).

Plastic pollution is a Western problem

Plastic producers and plastic lobby groups like the American Chemistry Council blame Asia for the plastic pollution in our oceans by pointing out that the majority of that pollution comes from Asia.

In reality, the West ships its plastic trash off to Asia, while large multinational corporations push their products, such as single-use plastic sachets of soap, shampoo, sauces and more, onto developing countries that lack the infrastructure to deal with such vast amounts of plastic waste.

Plastic harms the poor and people of color most

From the extraction of the fossil fuels that plastic is made from, to the manufacturing of the material itself, to ad hoc recycling facilities (sometimes merely a backyard), to incineration, plastic harms human health throughout its lifecycle.

These activities disproportionately impact the poor and people of color. In India, extreme poverty forces women to work under dangerous conditions as garbage sorters. In the US, people of color are more likely to live near the incinerator that poisons the air or the fracking site that contaminates the water (and the air).

Children living within two miles of the Skip Channel oil refinery in Texas have cancer rates 56% higher than elsewhere in the US. Meanwhile, because the EPA has reduced the number of chemicals that must be monitored, the air quality around fracking sites has improved—on paper.

So what can we do?

This grassroots organization describes itself as follows:

The #BreakFreeFromPlastic Movement is civil society’s response to the global plastic pollution crisis. More than 80 organizations launched the global movement on 2016 in Tagaytay, Philippines. Today, around 8,000 members from across the world have joined the movement to demand massive reductions in single-use plastics and to push for lasting solutions to the plastic pollution crisis. These organizations and individuals share the common values of environmental protection and social justice, which guide their work at the community level and represent a global, unified vision under the #breakfreefromplastic core pillars.”

You can contribute to Break Free From Plastic’s work in a variety of ways that suit you. Join here.

2. Get involved in Break Free from Plastic’s corporate campaigns

These include, among many others:

3. Send plastic trash back to its owners—the corporations that created it

Although we can’t clean up or recycle our way out of this unmanageable mess we can call on the corporations producing all of this plastic to stop. Break Free From Plastic has put together a comprehensive tool kit for conducting brand audits, in order to figure out which companies are the most responsible.

During a brand audit, volunteers collect plastic trash, sort it according to the companies that created it and then send the trash back to the various companies’ headquarters. You can read Break Free From Plastic’s 2019 brand audit report here. For the second year in a row, Coca-Cola, Nestlé and PepsiCo were the top three plastic polluters globally.

I Iove how the film connects all the dots. Plastic relates to Big Oil and to climate change. Ninety-nine percent of the material used to make plastic comes from fossil fuels. As plastic degrades in the environment, it releases greenhouse gases, as it also does when it burns in an incinerator or as fuel.

Like all companies, fossil fuel companies need cash flow to operate. Cut them off by withdrawing any investments you may have in them. The grassroots organization 350.org has pushed for divestment for over 10 years and amazing things have happened within just the last year. Universities, the Vatican, pension funds and other large entities have divested their money away from fossil fuels, thanks to grassroots efforts. You’ll find information on how to divest on Fossil Free’s website.

5. Break up with Chase, Wells Fargo, Citi, Bank of America, RBC and other big banks investing in fossil fuels

Again, the fault does not lie with consumers; we didn’t create the plastic pollution crisis. But we can try to cut the plastic wherever we can in our own lives.

You may feel that you make no difference but over 800 of you watched this film and ours was just one of many virtual screenings. The changes that all of us continue to make do add up. And they create a ripple effect—we all go on to influence others.

Manju, Jonathan and I all constantly post information on reducing waste. You can find that in our IG feeds and on our blogs/websites. Here is my list of 50 ways to break up with plastic (a lot of break ups going on in this post…)

Smaller companies will more likely fulfill your outlandish requests, such as “May I please fill my clean jar with bulk rice?” or “Can I use my clean cloth shopping bag in your store?”

When you shop small, you also support your local community. A larger portion of your dollar stays in your community versus when you shop in a chain store or online. Your sales taxes help fund schools, hospitals, infrastructure and so on, while the employees of the small business you support go on to spend their wages in your community. And when we support smaller businesses more, we support powerful multinational corporations less.

At the end of the film, we learn how we can stop the oil companies from producing all of this plastic:

Vote for politicians who support the elimination of subsidies for oil companies. Trump wants to give the industry more, not less. Under his administration, fossil fuel companies have received at least $3 billion in pandemic relief. Just last week, Trump gave the industry his latest gift—the rollback of environmental protections in order to expedite permits for infrastructure projects, including pipelines. As NPR put it earlier this year, “This President Is All About Fossil Fuels.”

9. Get involved in your municipality

If you can get your municipality on board, you can make a big difference in your community. Find Break Free From Plastic’s toolkit for that here. In the discussion after the film, I talked about a Girl Scout troop in Palo Alto that started a campaign to ban plastic straws. They wound up working with Palo Alto City Council, which soon afterward implemented an aggressive ban on single-use plastics that went into effect this year. So far, Palo Alto has banned straws, stirrers, cutlery, beverage plugs and produce bags with more bans going into effect within the next couple of years.

10. Organize your own virtual screening of The Story of Plastic

Do you have a group that would like to watch the film? Arrange that through storyofplastic.org. There, you can also search for a virtual screening to join. We need as many people as possible to watch this film! As one of you told me in an email,

I believe that after seeing this film, any sane person will have no choice but to change.”

How to stay positive

During the end of our Zoom discussion, someone asked the question “How do I stay positive?” The following Jane Goodall quote immediately sprang to my mind:

I like to envision the whole world as a jigsaw puzzle… If you look at the whole picture, it is overwhelming and terrifying, but if you work on your little part of the jigsaw and know that people all over the world are working on their little bits, that’s what will give you hope.”

Finding your people will also help you stay positive. I’ve met the most wonderful people through my blog and social media, many of whom I’ve had the pleasure of meeting in real life through my produce bag sewing bees. We can’t meet in person right now but we will again soon.