Eating more pastry, including this whole wheat version, fights food waste. We all do what we must! You can fill pastry with all kinds of ingredients, helping ensure you cook up more of the food you have on hand. You’ll buy less food, waste less food and save money on food. All thanks to flaky pastry!

The pastry itself need not go to waste

Whatever you bake won’t go to waste

If you bake pumpkin pies for Thanksgiving dinner and any leftover pie manages to survive past breakfast on Friday morning, it probably won’t last much longer than that. Most people love pastry. It gets eaten.

Almost every recipe for pastry will instruct you to wrap the dough in plastic wrap before chilling. After breaking up with plastic in 2011, I easily found an alternative to plastic wrap. I flatten the dough into a disk, place it on a clean plate and cover it with an inverted plate. The plate-protected dough then rests in the refrigerator.

Many recipes that call for parbaking a pie shell (for a quiche, for example), instruct bakers to line the formed pastry with parchment paper and weigh the dough down with pie weights (my daughter uses dried beans dedicated for the task).

You could skip the parchment if you have a second pie plate. Parchment isn’t the worst thing but with “zero-waste” in my blog and book title, I have to practice what I preach. Form a pie shell in a pie plate and gently place that second pie dish over it. After parbaking the shell, carefully remove the top pie plate. 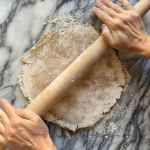 My book won silver for single-subject cookbooks at the Taste Canada awards!

I’ve also won a second place Gourmand cookbook award in the category of food waste. And my book is shortlisted for an award from the International Association of Culinary Professionals.

Learn more about my book here. Thank you to everyone who has bought a copy or written a review on Amazon or elsewhere!