Easy-to-make limoncello calls for a mere four ingredients, one of which is water.

While I anticipated my annual ritual of preserving all the lemons this year, my tree had other plans. It produced only small lemons and not many of them. So I asked around for lemons—here in Northern California, they grow all over the place—and a friend gave me about 30 pounds of Eureka lemons.

Reduce food waste: Find a use for the juice

I made both limoncello and preserved lemons with my bounty. Typically, limoncello calls for the peels only. Preserved lemons call for whole lemons plus lemon juice from extra lemons. So that leaves behind a bunch of peels—perfect for limoncello.

By making limoncello and preserved lemons at the same time, I use up more of the whole lemon and waste none of the good stuff. If you have extra rinds on your hands from preserving lemons and you’ve already made vats of limoncello, you can cut those rinds into smaller pieces and stuff them into your jars of preserved lemons for bonus pieces. But enough about the preserved lemons. Today, limoncello enjoys its day in the spotlight.

Because the skins of fruit and non-organic vegetables generally harbor more pesticide residue than the flesh, I consume organic lemons only. I also prefer lemons without wax—the food-grade coating that gives citrus that glossy, cosmetically altered appearance that you will never see on citrus growing on trees.

I tested two different brands of vodka for this. They both made great limoncello—none of which will go to waste—but the batch made with the expensive vodka (Grey Goose that someone gave me) goes down much smoother than the cheaper vodka (Tito’s that MK bought to make vodka sauce), which comes as no surprise.

After I made my limoncello, two colleagues told me separately that it tastes best when made with neutral-tasting Everclear, which apparently extracts the most flavor from the lemon peels. But if Everclear makes even more delicious limoncello, that sounds dangerous! You forget this has alcohol in it, it tastes so good. So drink only small amounts! You’ve been warned.

Enjoy small amounts of limoncello chilled, served in small glasses that you’ve also chilled (in the freezer). I plan on baking limoncello biscotti with some of this. MK made limoncello lemon bars last week. I wish I had taken a picture of those—they looked so professional and tasted so good—but we decimated them immediately before I could grab my phone. Did I mention this is strong? Because I will bake with my limoncello, I made it quite strong. I want to be able to taste it. 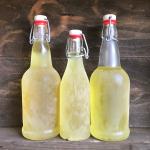 20 Replies to “When Life Hands You Lemon Peels, Make Limoncello”