If you have read my blog at all or follow me on social media, you may know that I am a huge Michael Pollan fan. His books changed my life. After learning about the horrors of our industrial food system in The Omnivore’s Dilemma, I overhauled my diet. In Defense of Food answers the question many people have after reading The Omnivore’s Dilemma: “What on earth am I going to eat?” The Botany of Desire describes how we humans do the bidding of plants (not the other way around as we smugly assume), spreading species far and wide, much like bees who unwittingly distribute pollen as they go about their business. Oh and I must not forget Cooked. That book helped me bake better sourdough and also introduced me to fermentation guru Sandor Katz.

You may wonder if I can write anything but a glowing, gushing review of Michael Pollan’s new book, How to Change Your Mind: What the New Science of Psychedelics Teaches Us About Consciousness, Dying, Addiction, Depression, and Transcendence.

But if you know me personally, you also know that drugs terrify me. At about age 15, my brother Robert’s paranoid schizophrenia and illicit drug addiction first manifested themselves. I was eight. Robert was big and loud and scary as hell. And usually stoned. On the bright side, he provided a living, breathing, personal drug prevention program for me and my friends growing up.

So when I heard about Michael Pollan’s new book about psychedelics, I had misgivings. It’s about drugs! It seemed like a departure from his brilliant food writing. Then I picked it up. And couldn’t put it down.

I loved this book.

How to Change Your Mind examines the current, exciting research into the potential of psychedelics to relieve hard-to-treat mental disorders such as addiction, obsessive compulsive disorder, trauma, eating disorders and depression.

For most of us, the word “psychedelics” conjures up images of hippies garbed in tie-dyed t-shirts, carrying their daisies as they protested the Vietnam War on the streets while tripping on acid. The book does discuss this aspect of the fascinating history of psychedelics—those hippies, psychedelic evangelist/researcher Timothy Leary and the counter culture of the 60s, all of which directly contributed to the shutdown of important research into this class of now-prohibited yet extremely useful drugs. However, the current scientific study of psychedelics takes place under very controlled conditions in a research setting (sometimes replete with an altar and Buddha statues), with a researcher or therapist on hand to guide subjects throughout their journeys. Participants don’t simply drop acid willy-nilly or consume copious amounts of magic mushrooms and go on their merry way to the club.

Research from before the 50s and into the 70s—which has nearly been erased from history—had, like today, shown great promise. A 1967 paper that summarized several previous papers about psycholytic therapy—a type of psychotherapy that includes low doses of psychedelics—found that “the technique’s rate of success ranged from 70 percent in cases of anxiety neurosis, 62 percent for depression, and 42 percent for obsessive compulsive disorder.” With such high success rates, it’s not that surprising that after these substances and studies into them had been banned, a handful of daring and determined researchers continued their work underground. In the late 90s, restrictions eased and a renaissance into the research emerged.

In current studies, psilocybin (the psychoactive compound in magic mushrooms) has had striking results in helping terminal cancer patients face their mortality. After participating in these experiments at Johns Hopkins, UCLA and New York University, these patients reported “that over the course of a single guided psychedelic ‘journey’ they reconceived how they viewed their cancer and the prospect of dying. Several of them said they had lost their fear of death completely.” In another study of psilocybin’s effects on smoking cessation, six months after their sessions, “80 percent of volunteers were confirmed as abstinent; at the one-year mark, that figure had fallen to 67 percent, which is still a better rate of success than the best treatment now available.” This was a small study but a larger one is currently underway.

How can mere molecules alter the mind this way—change it? Well, you’ll have to read the book. But in short, psychedelics have the ability to dissolve the ego—at least in the short term, with the positive effects of the trip lasting well after treatment.

An immersive journalist, as part of his research for the book, Pollan took psilocybin, LSD and the ominous sounding “the toad,” or 5-MeO-DMT, a psychedelic compound found in the venom of the Sonoran desert toad, each time under the care of a psychedelic therapist. He describes his search for these therapists—the book is full of colorful characters—and the trips themselves. Not spiritual himself, Pollan writes that his trips showed him “what the Buddhists try to tell us but [he had] never really understood: that there is much more to consciousness than the ego, as we would see if it would just shut up.”

The ego can be a terrible thing. It taunts us with our past. It torments us with a worrisome future that hasn’t yet happened and may never will. It robs us of the present. The ego imprisons us within damaging patterns of behavior from which we can’t seem to escape. It spins stories, it criticizes us, it won’t stop its constant chatter. As researcher Matt Johnson of Johns Hopkins puts it in the book,

So much of human suffering stems from having this self that needs to be psychologically defended at all costs. We’re trapped in a story that sees ourselves as independent, isolated agents acting in the world. But that self is an illusion. It can be a useful illusion, when you’re swinging through the trees or escaping from a cheetah or trying to do your taxes, but at the systems level, there is no truth to it. You can take any number of more accurate perspectives: that we’re a swarm of genes, vehicles for passing DNA; that we’re social creatures through and through, unable to survive alone; that we’re organisms in an ecosystem, linked together on this planet floating in the middle of nowhere. Wherever you look, you see that the level of interconnectedness is truly amazing, and yet we insist on thinking of ourselves as individual agents.

So, do I want to change my mind? Absolutely. Shortly after I started reading the book, I dusted off my meditation bench and noise-blocking headphones—literally (they were covered in dust). I used to meditate every morning but haven’t done so in years. Meditation, when practiced regularly, also quiets the mind and—with mastery—squelches the “tyranny of an ego.” Pollan explains how psychedelic researchers in London, England discovered that in fMRI scans, the brains of people on psychedelics and those of experienced meditators looked “remarkably alike.”

As Stephen Colbert so aptly put it at the end of his interview below of Michael Pollan on The Late Show with Stephen Colbert, “Maybe the ego should be a controlled substance.” 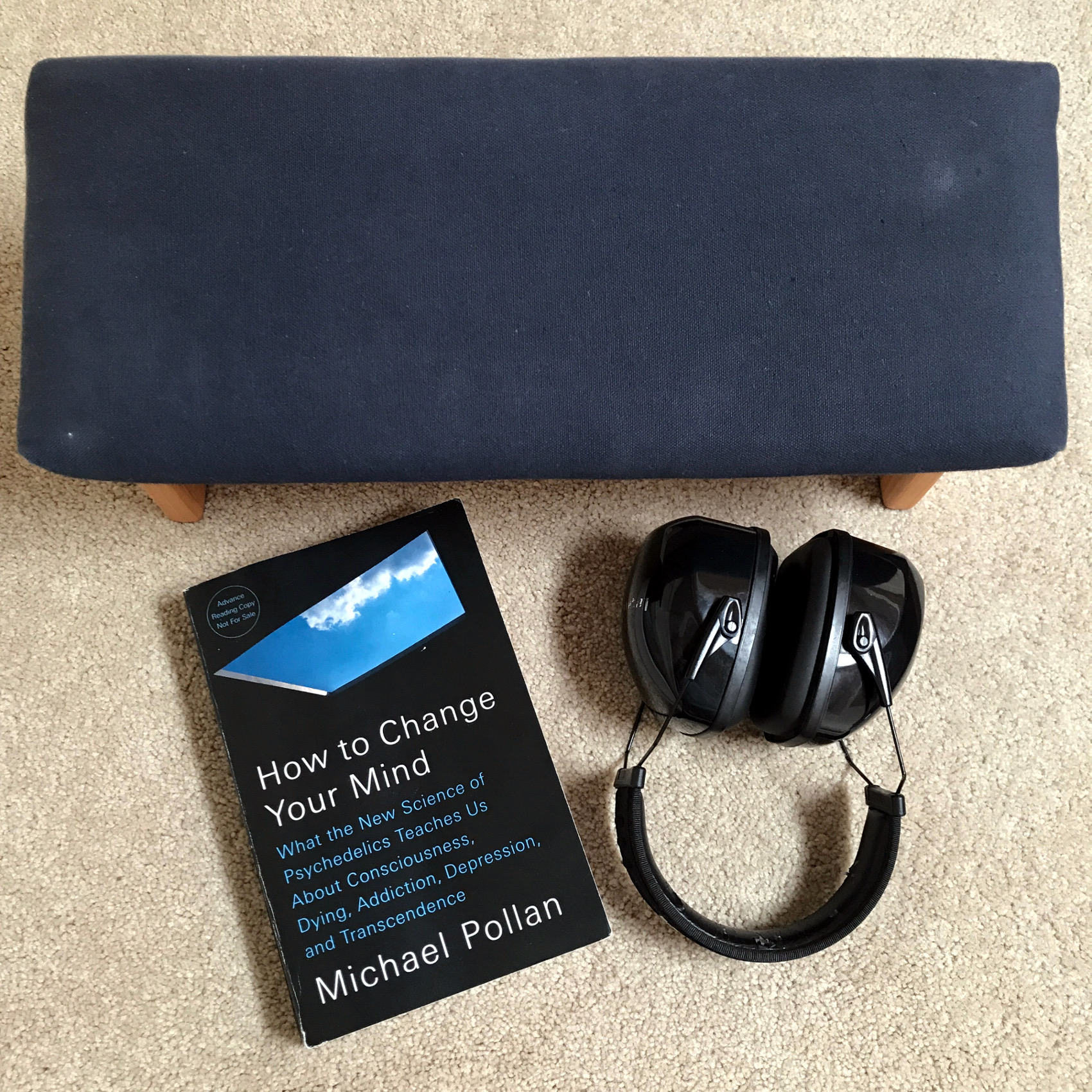 4 Replies to “Book Review: Michael Pollan’s How to Change Your Mind”