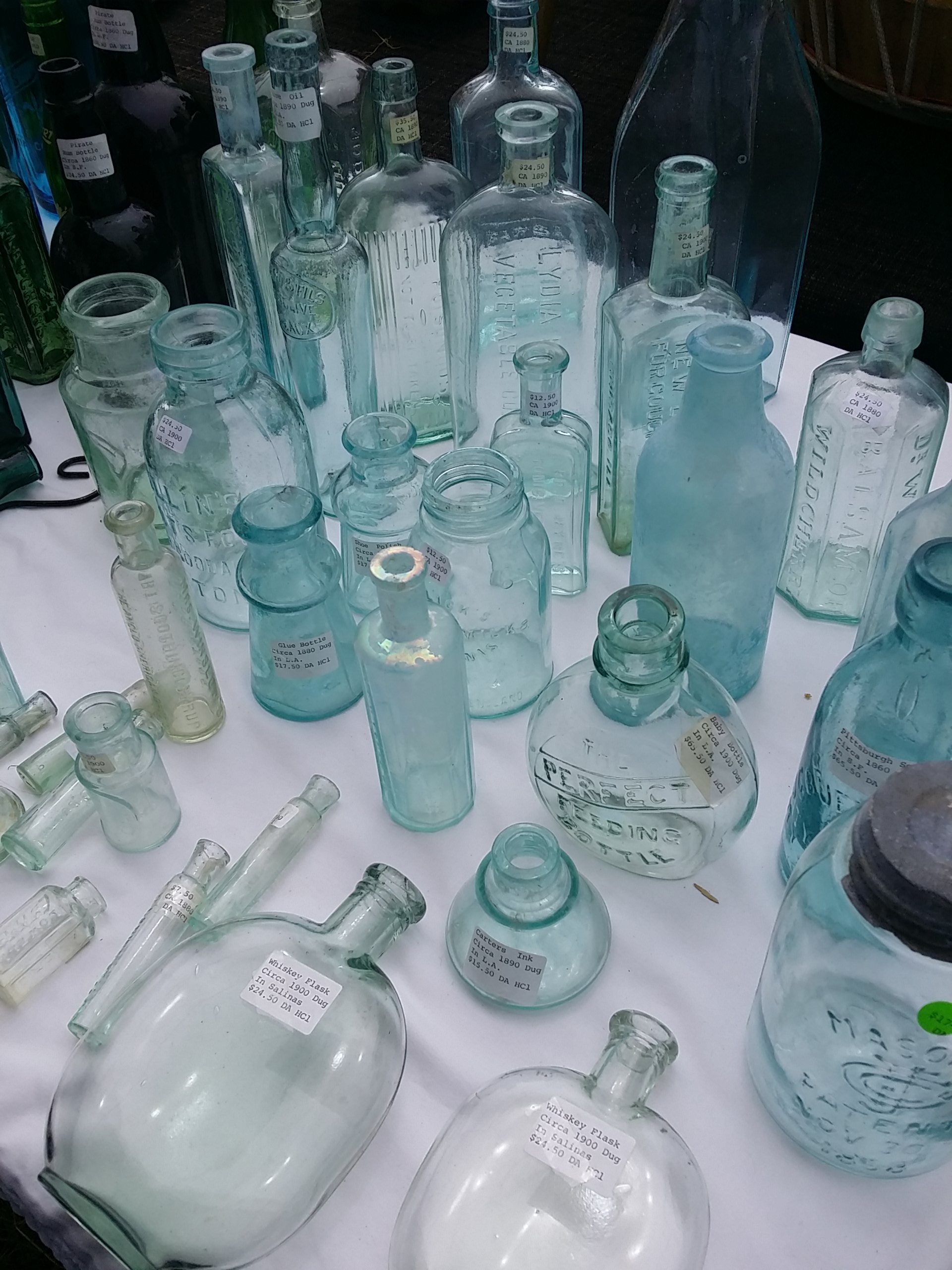 Yesterday, I attended an antique fair in Moss Landing, just north of Monterey. I bought the two honeycomb shaped ice-cube trays pictured below. Not only do these ice-cube trays replace icky plastic, they evoke childhood memories. 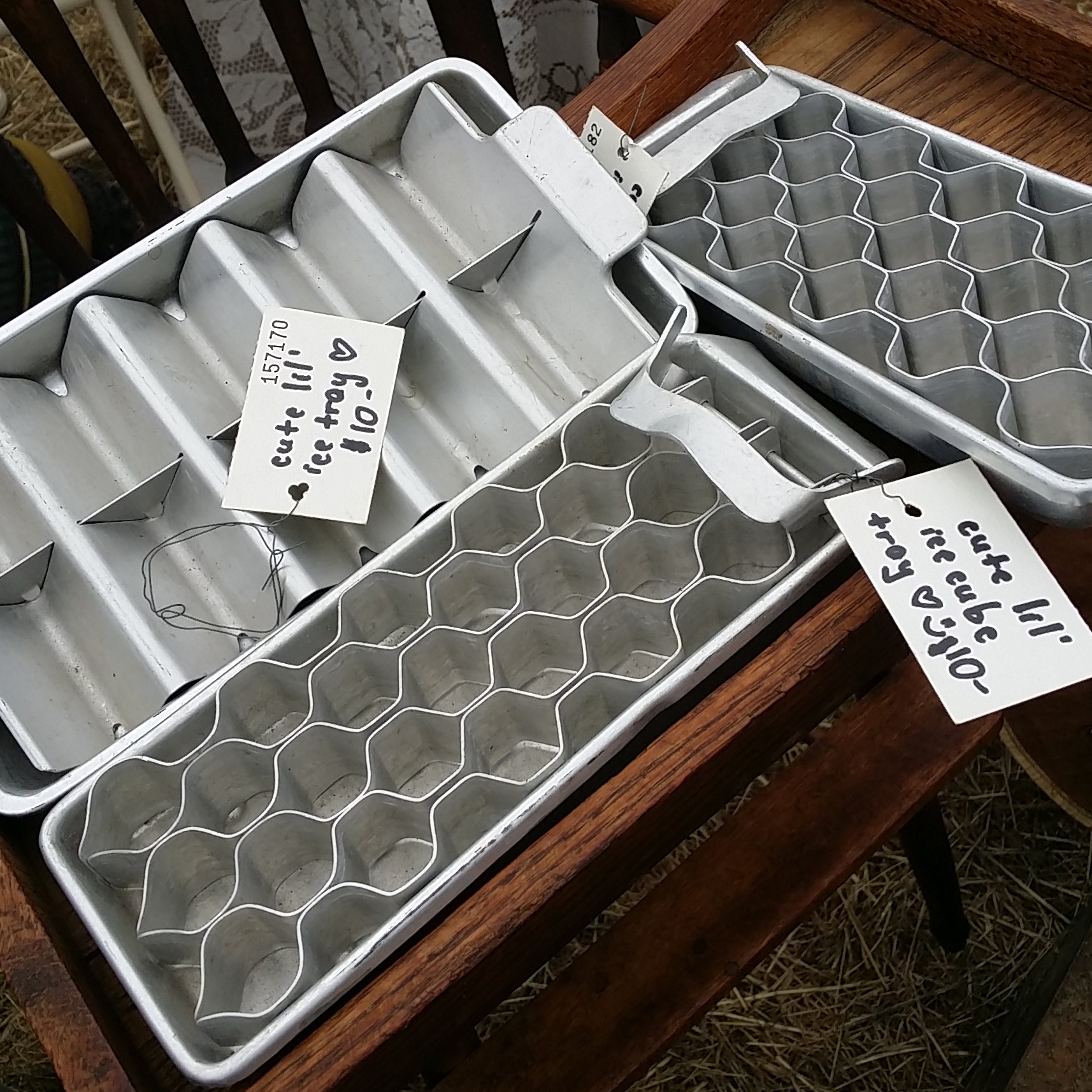 When I was a little girl, every year, my Aunt Phyllis threw a big Christmas party. All my cousins attended (including the 10 raucously funny Rashottes, nine boys, one girl). At that time of year only, in her metal ice-cube trays, my aunt froze ice cubes embedded with either one green grape or one maraschino cherry, laid out in two zigzags down the length of the tray. I can still hear the crack and squeak of the ice as she pulled up the metal bar, separated the cubes and retrieved one for me while I stood looking up at her waiting. Getting one of these in my glass (a real glass) was a Christmas highlight. Such a little thing.

The nostalgia brought on by my new acquisition yesterday made me wonder what kind of memories we create today in a throw-away society obsessed with convenience. What stories would a plastic ice-cube tray elicit? Or plastic cutlery or paper plates? I wonder if anyone actually has a fond memory of cracking open a plastic bottle of water or juice? The rememberance probably fades as quickly as the container hits the trash bin.

Imagine the secrets objects from the antique fair hold. 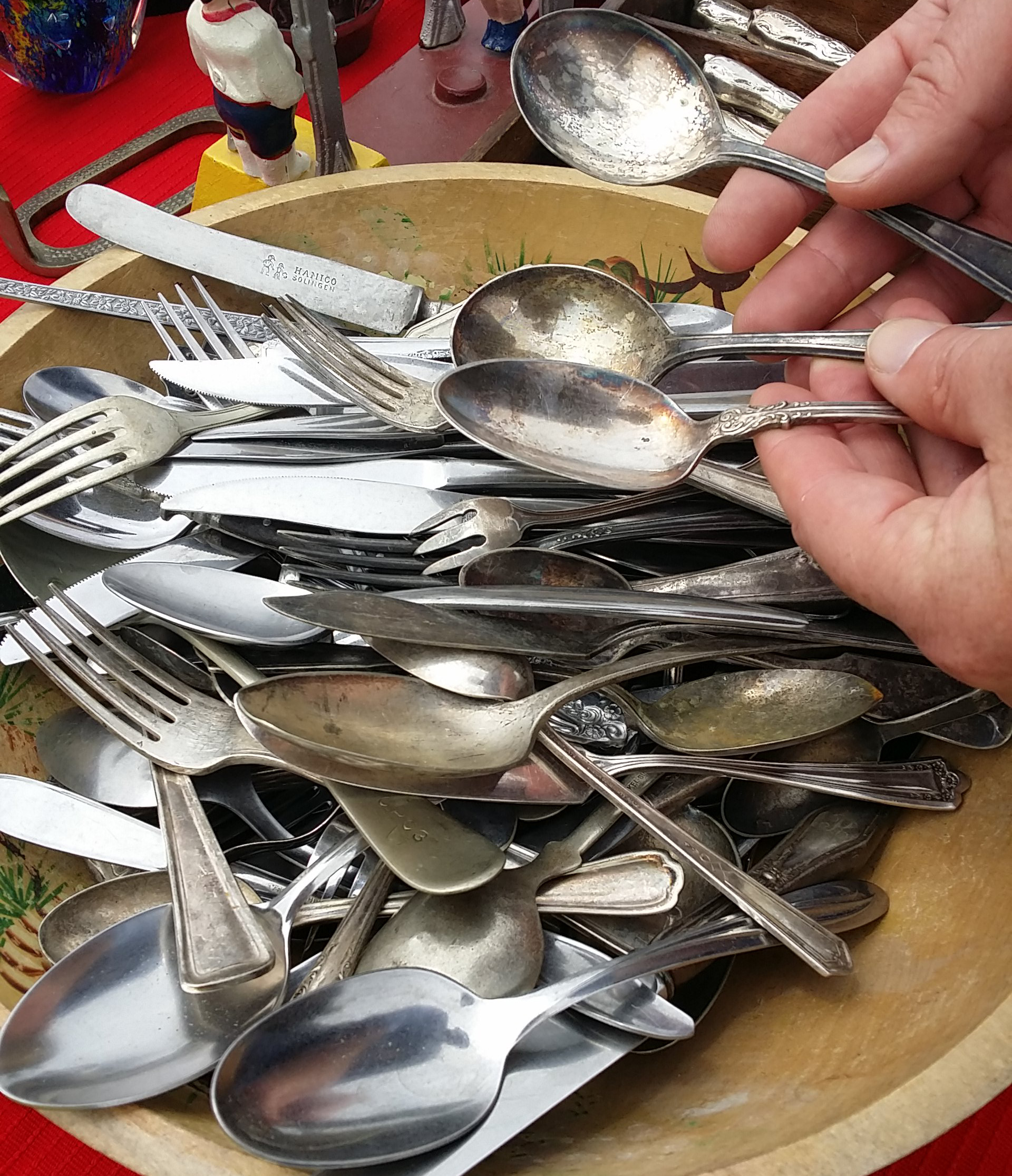 What kinds of meals did people eat with the utensils above? What arguments broke out at the Thanksgiving table set with these? Was a shy boy able to snag a seat next to the cousin he had a crush on, at a table laid out with this cutlery, polished for the occasion? Or maybe we would hear more sinister stories. Perhaps a drunken mourner threatened his brother with a butter knife at their dad’s funeral reception. Fights often break out at those things… 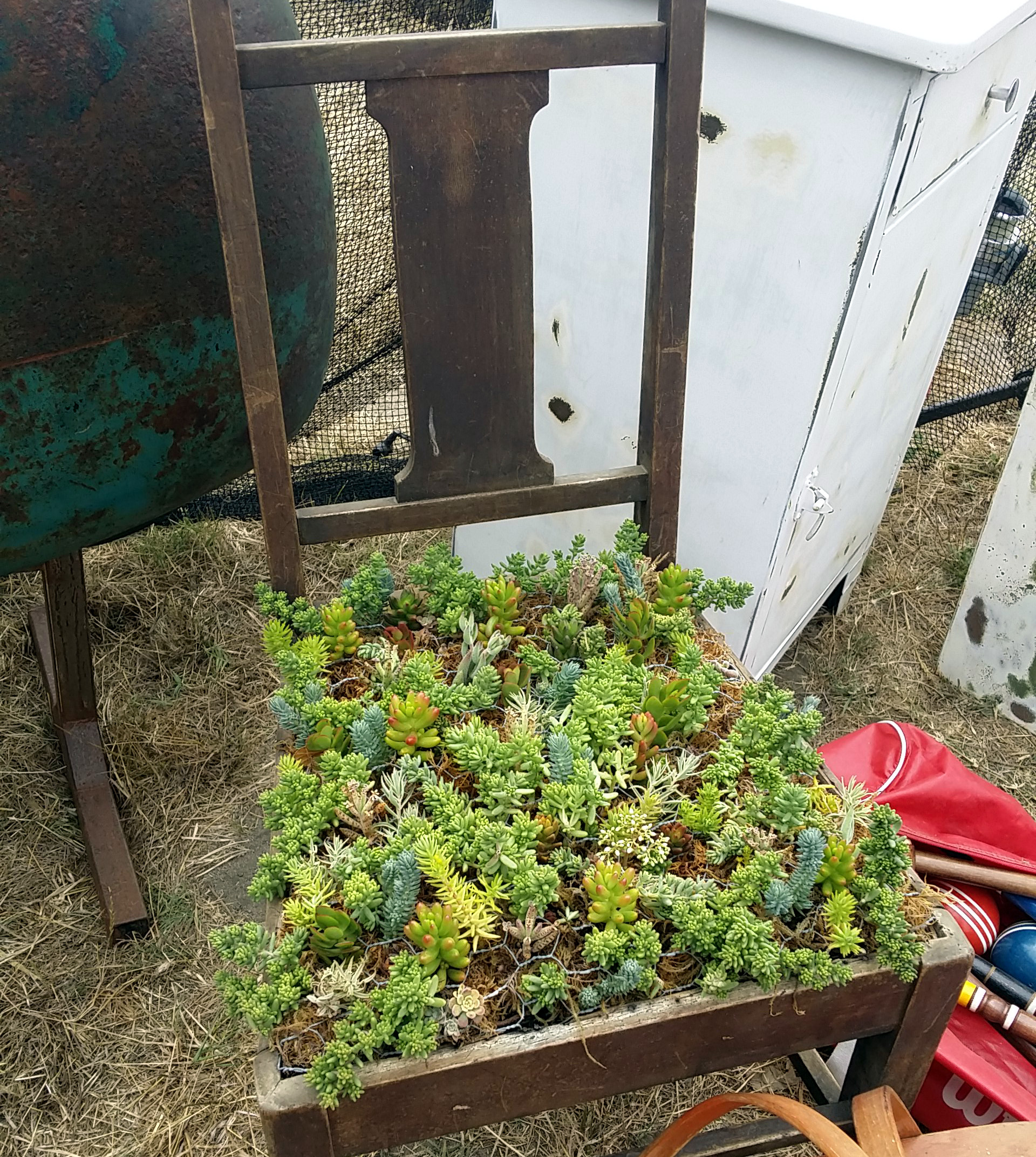 Was this the favorite chair of someone’s grandmother? She’s long gone, but succulents give the worn seat new life. 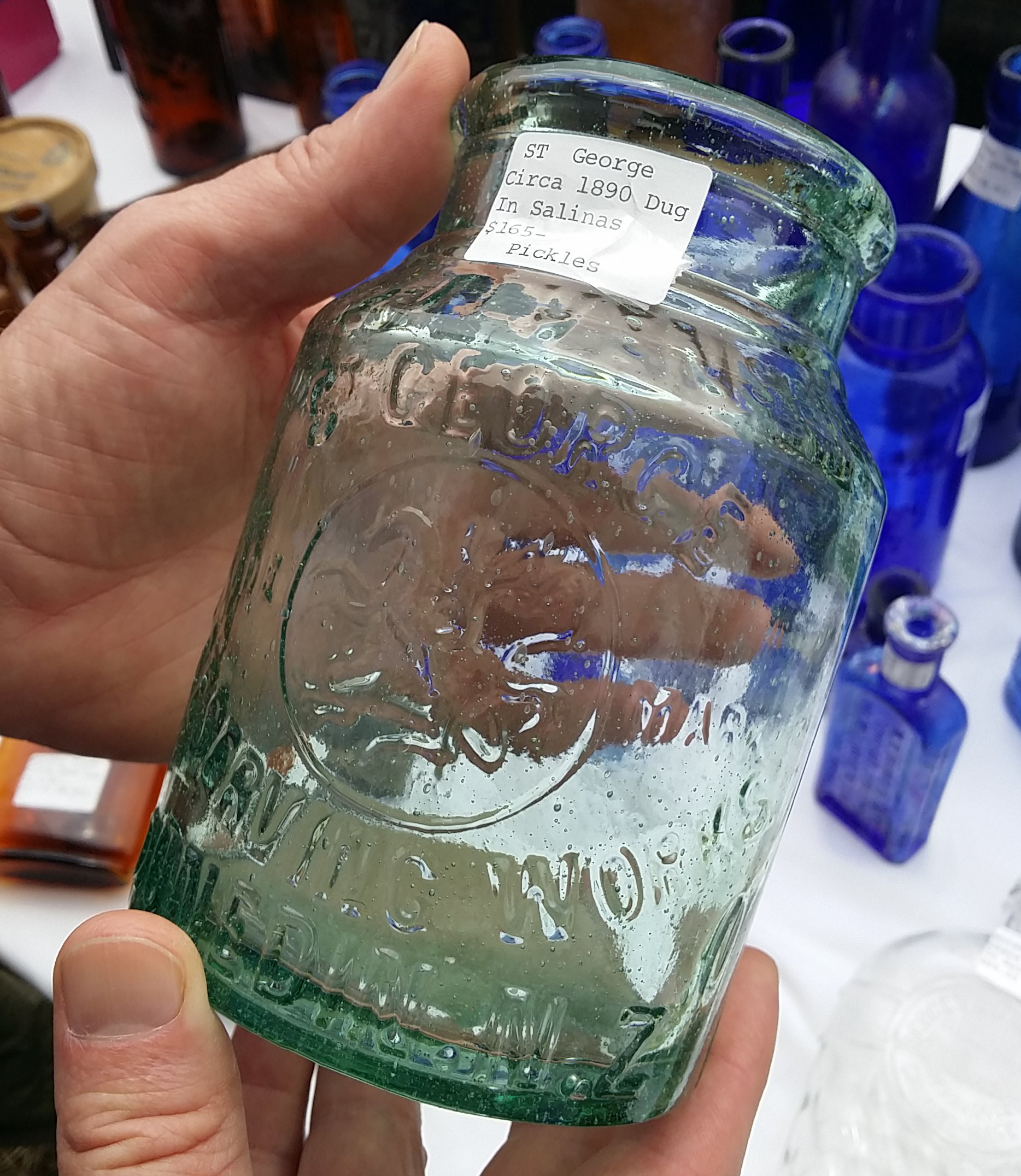 In 1890, the approximate year this jar dates to, Vincent Van Gogh died, John Muir convinced the US Congress to designate Yosemite as a National Park and The Wounded Knee Massacre of Lakota Sioux took place in South Dakota. What delectable foods did this container hold? Who were the people who ate them? How were they dressed? What did they think of these events? 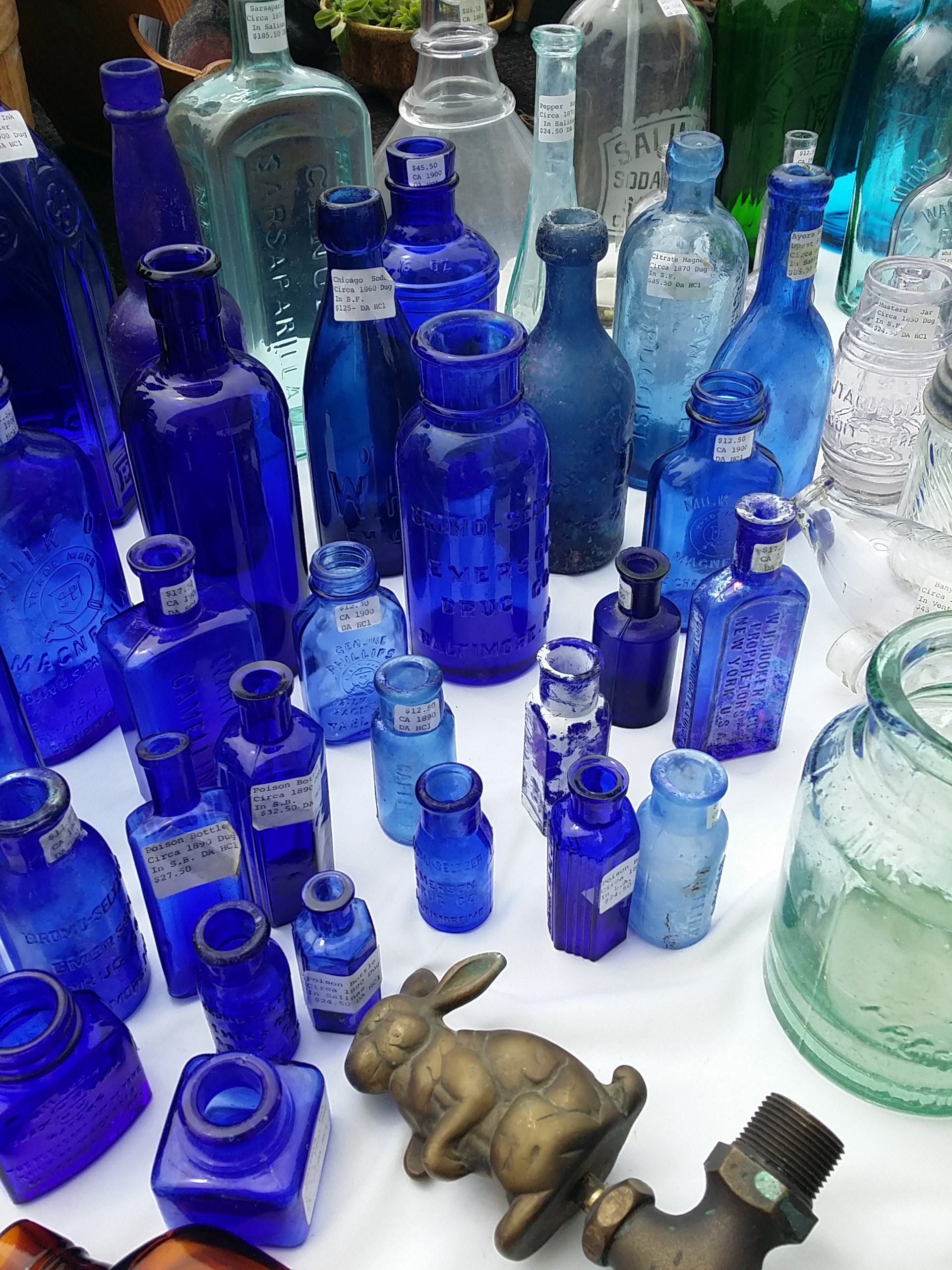 The poison bottles in the bottom left of this pic also date to the 1890s. Filled with toxic insect killer or household cleaner, for example, the distinctive cobalt blue colored bottles identified the contents as noxious and prevented people from accidentally ingesting them. At least we hope. I’m sure these bottles have witnessed some unfortunate scenes. 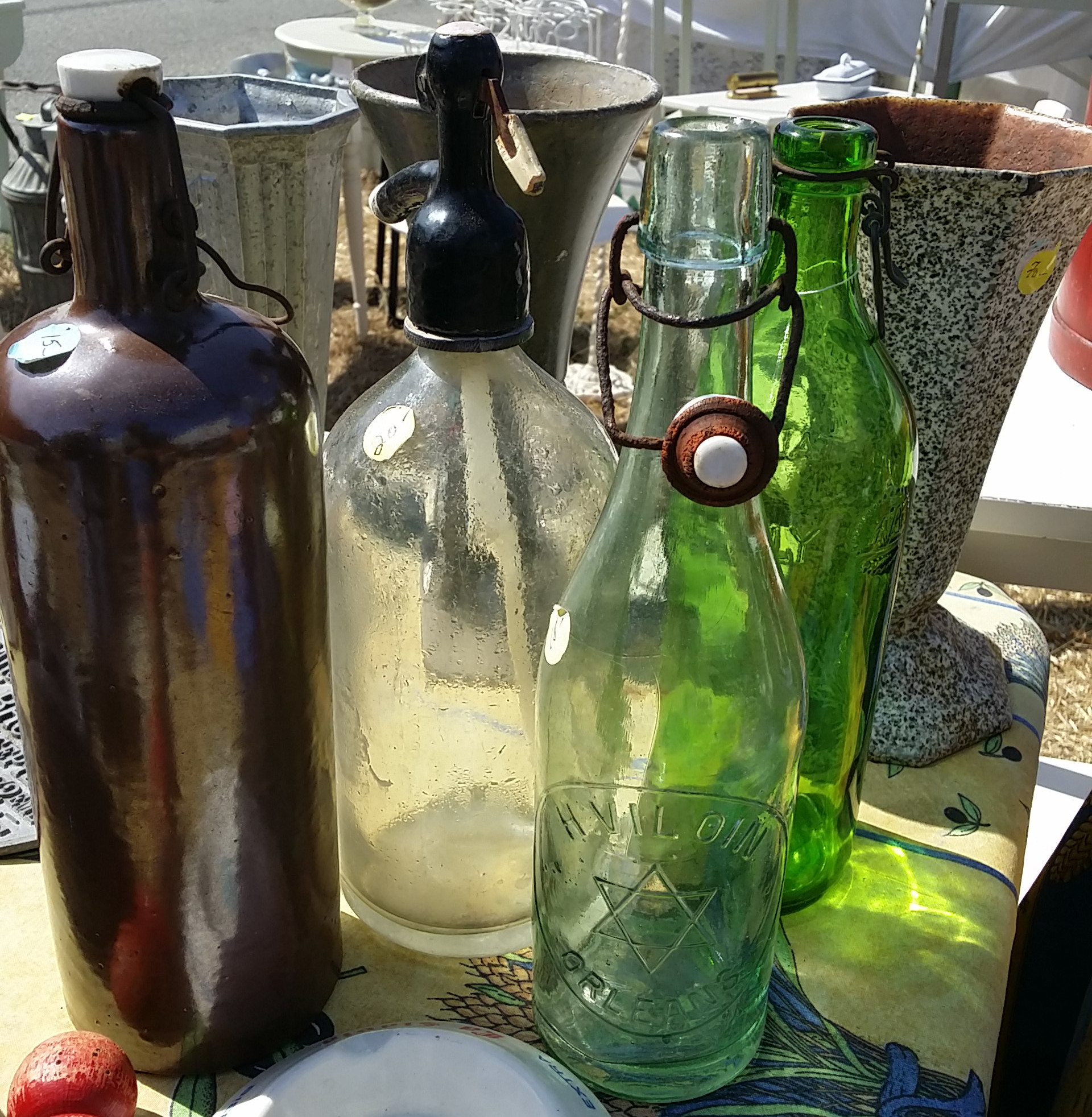 Which drinks did these bottles store? What were the recipes like? Which games did the children play who drank them on a hot summer day under the shade of a big oak tree?

“No sooner had the warm liquid mixed with the crumbs touched my palate than a shudder ran through me and I stopped, intent upon the extraordinary thing that was happening to me. An exquisite pleasure had invaded my senses, something isolated, detached, with no suggestion of its origin. And at once the vicissitudes of life had become indifferent to me, its disasters innocuous, its brevity illusory—this new sensation having had on me the effect which love has of filling me with a precious essence; or rather this essence was not in me it was me. … Whence did it come? What did it mean? How could I seize and apprehend it? … And suddenly the memory revealed itself. The taste was that of the little piece of madeleine which on Sunday mornings at Combray (because on those mornings I did not go out before mass), when I went to say good morning to her in her bedroom, my aunt Léonie used to give me, dipping it first in her own cup of tea or tisane.” — Marcel Proust, In Search of Lost Time

19 Replies to “Amnesia of Things Past”